The loving eulogies for Sen. Frank Lautenberg, heavy on the praise for curbing teenage drinking and in-flight smoking, have obscured just how sleazily he regained office in 2002. Conservatives can easily forget how uninterested the media were in that story, even as it unfolded.

Late in an increasingly competitive race against Republican Doug Forrester in 2002, Torricelli “suddenly withdrew after disclosure of illegal contributions to his campaign by David Chang, a businessman connected to North Korea. Shortly thereafter, the New Jersey Supreme Court  unanimously ruled that the Democratic Party could legally replace Torricelli's name on the ballot” with Lautenberg. Brent Bozell offered the media story: 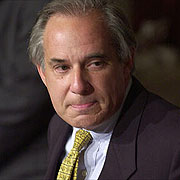 It's true that the local reporting on WNBC in New York, culminating in a 38-minute interview with Torricelli's human ATM, David Chang, played a part in his plummeting polls. But throughout the ordeal the nation's Big Three news networks refused to get excited over Torricelli's scandalous behavior. Only NBC, just days before Torricelli withdrew, had a sentence that concretely underlined his corruption: "Government sources say over five years, Torricelli spent three times more cash than he withdrew from his personal accounts."

Let's rewind through the sparse coverage of Torricelli's ethics the last two years. On April 18, 2001, the New York Times reported that he was being accused of taking personal gifts. In fine Clinton form, Torricelli responded, "I have never, ever done anything at any time to betray the trust of the people of the state of New Jersey. Never!" NBC aired a story, making the obvious political point that if Torricelli was forced to resign, it would tilt Senate control back to the Republicans. ABC and CBS aired nothing.

A few weeks later, on June 5, after Jim Jeffords went party-swapping, CBS decided to sing a Torch song, employing a too-typical Dan Rather introduction: "Attention is shifting to one member of the new majority, Democrat Robert Torricelli of New Jersey, and the possibility of what he sees as a Republican-motivated and -led criminal investigation of him could lead to yet another change of power back to the Republicans." In one of his last reports for CBS, Phil Jones relayed that Torricelli "believes the Republican-controlled Justice Department is out to get him," and that they were planning to ask for a special counsel to go around the hopeless bias of Ashcroft & Co. Once again, this was somehow a GOP plot.

Fast forward to January 3, 2002. The supposedly partisan Justice Department announced it wouldn't file criminal charges. All three anchors mentioned this development in a couple of sentences. There was nothing more on the Torch beat until July 31, when the Senate Ethics Committee severely admonished Torricelli for his conduct. Yet again, only NBC mentioned it that night. Four nights later, when Peter Jennings wasn't hanging around, ABC political director Mark Halperin did file a story. CBS aired nothing. Only NBC returned to the story in September, with Lisa Myers summarizing the WNBC findings, before Torricelli pulled the plug.

There was no network investigation a la Cheney. No one spent any time detailing what the ethics committee had found that caused the "severe" language. The 3-3 panel couldn't be dismissed by the Dan Rathers of being "Republican-motivated and -led," either. Despite polls going south after the ethics committee ruling, the networks stayed quiet. These are the same networks that began dark intimations of "Newt Incorporated" with the first whiff of a Republican majority in 1994.

Typically, other Democratic outrages are going mostly ignored this fall. While Democrats in New Jersey fought to remove a healthy Torricelli from the ballot, Democrats in Hawaii touted the ballot-worthiness of deceased Rep. Patsy Mink, with Sen. Daniel Inouye suggesting that everyone vote for Mrs. Mink as a gesture of affection and gratitude. Just like Missouri in 2000, they're out selling the message that a dead Democrat beats a living Republican any day. None of the networks have reported this. Only CBS "Sunday Morning" reported Mrs. Mink's passing.

In illustrating how the New Jersey Supreme Court justices clearly leaned in favor of ignoring the law, something they did hours later in ruling that Frank Lautenberg could replace Robert Torricelli on the ballot for Senate, FNC reporter Carl Cameron played a clip, from the oral argument session, of one justice who was off camera: "Why should we strictly enforce a statute and penalize the voters, whose right it is to participate in the democratic process and have a real choice between two candidates?"

Of course, New Jerseyans would have had plenty of choices since, in addition to the Republican, the November ballot for the Senate seat already included Green Party, Libertarian, Socialist Worker and New Jersey Conservative Party candidates.

During the "Grapevine" segment on the same October 2 show, Brit Hume highlighted the liberal Democratic political donations of two justices:

"Two members of the New Jersey Supreme Court, which ruled today on the arguments on the Torricelli ballot case, gave money to Torricelli's campaigns in the past as we noted earlier. And one of the two, Justice Barry Albin, who gave to Torricelli in both 1996 and 1999, also gave to Frank Lautenberg's war chest that year -- 1996. The other justice who gave to Torricelli is Justice James Zazzali whose contributions came before the men where named to the court."