No Katrina For Clinton: CBS Excuses Feds of Blame on Levee Repairs In 1993 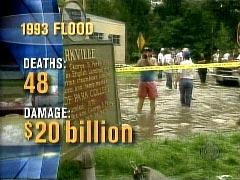 While the liberal media tries to make over a Kansas tornado to resemble their perfect media bias storm over Hurricane Katrina, the floods in Missouri may be a more analogous comparison. But the CBS Evening News wasn't going to allow local residents to blame the federal government without a rebuttal -- if the president was Bill Clinton.

On Wednesday night's newscast, CBS reporter Cynthia Bowers reported that residents were upset the feds didn't shore up the levees, as they failed to do after "the historic flood of 1993, which killed 48 people and did nearly $20 billion worth of damage to nine waterlogged states." But that shouldn't be associated with Clinton, Bowers implied: "Actually, it's not the federal government's responsibility to maintain every levee. Most of the hundreds of levees along the Missouri and Mississippi River are built and kept up by the people who live next to them."

Back in 1993, CBS Evening News reporter Vicki Mabrey didn't use the words "Clinton" or "Democrats" when locals began complaining about the government response, but ended the story on a sad note: "But the government has no way of keeping towns from asking for federal assistance, just like there's no way to guarantee the Mississippi will never flood again."

Hat tip to NB reader Gary Hall, who saw how Bowers reported on Wednesday night from Big Lake, Missouri, where the Missouri River rushed over nine levees and devastated a town of 300:

BOWERS: So far, the Missouri River and its tributaries have spilled over at least 20 levees, 12 foot tall walls made of dirt, putting downs at risk from St. Joseph in the northwest all the way to St. Louis in the east. Life long resident and town flood manager Glen Dieckmann has never seen anything like it.

GLENN DIECKMANN: This one was just whoops, all of a sudden we've topped the levees.

BOWERS: For him, and many in these parts, all of this is an unwelcome reminder of the historic flood of 1993 which killed 48 people and did nearly $20 billion worth of damage to nine waterlogged states. Big Lake resident Tom Bullock wonders why the government didn't do more after that flood to shore up the levee system.

TOM BULLOCK: The levees that were fixed after '93 here on the Missouri side that I know of, most of it was done by local land owners, farmers. The federal government didn't do crap for us.

JUDD KNEUVEAN, ARMY CORPS OF ENGINEERS: Flooding is unpredictable. Flooding at this level very dangerous. And it is not practical and feasible to protect against all flood levels 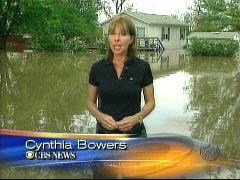 BOWERS: Actually, it's not the federal government's responsibility to maintain every levee. Most of the hundreds of levees along the Missouri and Mississippi River are built and kept up by the people who live next to them. People here say the federal government's help, with all its red tape, never seemed to be worth the trouble until now. The questions about levee safety will remain long after next week when the water is expected to recede.

Just for fun, let's explore this question: how did CBS cover the Flood of '93 at the time? Was it a problem for President Clinton and the image of his competence? Actually, the name "Clinton" or the word "Democrat" didn't seem to emerge as the locals complained about the government response. (Remember, the Democrats controlled the White House and both houses of Congress.) This is a story on the August 23, 1993 CBS Evening News:

CONNIE CHUNG, co-anchor: The government is also taking heat today for its handling of another disaster, the great Floods of '93. The Mississippi River was open to barge traffic today in both directions for the first time in almost two months. But life along the Mississippi is still far from normal. Correspondent Vicki Mabrey reports from the scene of one case in point.

VICKI MABREY reporting: The water and sandbaggers are gone, replaced now by mud and clean-up crews.

MABREY: LaGrange residents knew what the river would leave behind after it sat in their town for a month, the layers of caked dirt coating everything. Nearly three weeks after the floodwaters receded, folks in LaGrange thought they'd be well on their way to renovating their homes and businesses. They thought that by this point, they'd be much closer to having their lives back together.

Unidentified Man: I want to know when I can go work in my house.

MABREY: But progress is held up while residents and government officials debate what can and cannot be rebuilt.

Man: We're at the point now instead of household products and cleaning stuff and personal items, now we need boards and lumber and permission from the federal government to work on our houses.

MABREY: If repairs to a building in the flood plain will cost more than half of what the structure is worth, federal regulations say it must be elevated or moved to higher ground.

Mr. DICK GAFFNEY (Missouri Department of Natural Resources): If we insist on living right on the stream bank, then we're going to insist on getting flooded. And that may not be the smartest thing in the world to do.

MABREY: So LaGrange waits for a building inspector to decide if their library and restaurant and the rest of Main Street can stay put.

Mr. HAROLD LUDWIG (Mayor, LaGrange): I've told them a dozen times, just go to the city limits and just watch us build. We won't ask you for a penny.

MABREY: But the government has no way of keeping towns from asking for federal assistance, just like there's no way to guarantee the Mississippi will never flood again. Vicki Mabrey, CBS News, LaGrange, Missouri.

A look through the news from that time shows that CBS in no way thought of this as a story to pull a Brian Williams or an Anderson Cooper and get emotionally involved in how insensitive Washington was failing flood victims.