Lefties Scorn Bush As 'Mourner-In-Chief,' But to ABC, Clinton Was 'Chaplain-in-Chief' 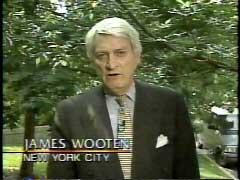 Over at the Huffington Post's Eat the Press blog, Jason Linkins objected Tuesday night to MSNBC's description of President Bush as "mourner-in-chief," demanding they stop because "It's emo and it's weird." Linkins admitted MSNBC was not the first to use this terminology. But perhaps liberals forget that the network news people employed it with Bill Clinton, too. In fact, on the July 25, 1996 World News Tonight, after a TWA plane crash, ABC's Jim Wooten tenderly hailed the Sensitive President, Bill Clinton, the nation's "chaplain in chief," an even stranger choice of words, given Clinton's historic reputation for indulgence:

Mr. Clinton is clearly more and more comfortable now in the role these times have forced on our Presidents --- first mourner and chaplain-in-chief. But his moments with the families must have struck him as especially poignant today, for when he left them in the hotel and entered his car, he buried his head on Mrs. Clinton's shoulder."

That would mean that Jim Wooten is "emo and weird." But never forget that Bill Clinton is the "man who's made America safe again for tears." Here's part of what Linkins wrote for Eat the Press:

Hey, MSNBC! How you doing? We have a question: What is the deal with this "Mourner-in-Chief" stuff? We've heard you've been calling the President this all day long (David Gregory, Howard Fineman, Brian Williams). Why are you doing this? It's emo and it's weird. You really have to stop doing that.

Look — we have strong, strenuous doubts that President Bush would want to be tagged with this title. And why would he? Seems to us that you really cannot pick a chief mourner among so many people who've lost loved ones, and anyway, by all accounts, the President has been pretty deferent to the needs of Virginia Tech's community. He's not exactly looking for attention, and for what it's worth, we sort of question you designating anyone "Mourner-in-Chief." It's not very sensitive.

Linkins is correct that a president can never mourn a loss of someone else's daughter the way the parents do, who are clearly the most affected mourners. But in our TV age, we do expect presidents to well, preside over moments of national tragedy. With the media pounding Bush daily to insure his approval rating stays low, it's a little sad to see the liberals nitpicking on this use of words on a day when Bush's press notices might be just slightly more positive than usual.