Roberts to McCain: 'Your Party Was in Charge' When Cancer Spending Was Cut 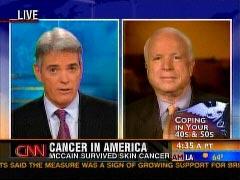 John McCain was making the rounds on the network and cable news channel morning shows on Wednesday. During his appearance on "American Morning," substitute host John Roberts tried to lay a guilt trip on the Arizona Senator when he brought up the current hot topic of cancer (McCain received treatment for melanoma in 2000). His first question resorted to the old left-wing cliche that throwing more money at a problem will lead to a solution.

ROBERTS: Again this year, in the next budget, President Bush has proposed to cut funding for the National Cancer Institute. I was on their web site this morning and noticed that for all the major cancer groups, spending on research has gone down for the past two years. Your party was in charge during that time. How did you let it happen?

McCain couldn't immediately confirm Roberts' claim. After touching on the cancer issue briefly, Roberts went on to issue of Iraq. Roberts mentioned McCain's appearance on Bill Bennett's radio program on Monday, where he commented on the improving situation in some parts of Baghdad. Subsequently, Roberts also read a quote from a new report by retired general Barry McCaffrey that appeared to contradict McCain's claim that things were getting better in Baghdad.

MCCAIN: The fact is that the neighborhoods are safer and every indicator of that - the number of bodies found, the number of deaths - the fact is that we are making progress. It's still dangerous, it's still a long way to go, but the fact is that things have improved, and much of that you do not get to the American people and that's just a fact. And in the Anbar province, the sheikhs are cooperating. There's significant progress in [the] Maliki government, legislating things that need to be done. I watched you on, I think, Sunday, where you said you didn't know whether there was progress or not. I think there's progress and I get briefed all the time as to what's going on there. I believe that this new strategy is succeeding, and I think it deserves a chance to do so.

McCain had been critical of the media's coverage of the Iraq war on Tuesday's "Situation Room" with Wolf Blitzer as well, which was directly referenced in Roberts' interview with the senator.

Between this appearance and his grilling on ABC's "Good Morning America," it should pretty clear to Senator McCain that the mainstream media have their targets set on him for his support of the Iraq War.