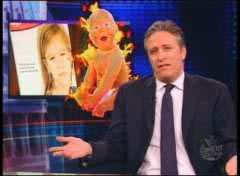 Conservatives aren't the only ones having trouble taking Gore seriously, even liberal Jon Stewart mocks him.

After Al Gore told Congress about the planet's fever and explained that when a baby has a fever you take the child to the doctor, Stewart asked if this metaphor could be carried too far:

"If the crib's on fire you don't speculate that the baby is flame retardant," continued Gore.

"So ignoring Gore's powerful message is like leaving a baby on fire. It's kind of a tough image to counter Missouri's Kit Bond -- whaddya got?" Stewart asked.

Bond showed a picture of a little girl from a family that can't afford heating so the girl must wear her coat when she's inside the house. The senator asked Gore if higher heating bills as the result of carbon caps would force the little girl to wear two coats inside?

And like a Comedy Central Solomon, Stewart had the solution: "Let the cold child, room with the flaming baby. Then, they can just leave us alone!"