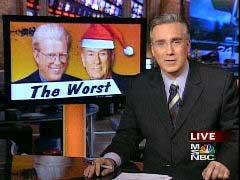 [This was first posted on June 28, 2006] Since its inception almost a year ago, MSNBC's Keith Olbermann has devoted a regular segment on his Countdown show to attacking various people who have gained the Countdown host's derision. The segment, titled "Worst Person in the World," is a strong measure of the MSNBC host's overwhelming bias against conservatives as the segment has served as a launchpad for attacks against conservative figures and positions at a dramatically greater rate than against the left. As reported by the latest Media Reality Check, by a staggeringly lopsided 8 to 1 margin, Olbermann has targeted conservatives, sometimes with substantial venom, while hitting a comparatively miniscule number of liberals.

Olbermann's "Worst Person in the World" segment normally features three nominees, although sometimes fewer, for the title of the same name, with the third place award labeled "Worse," second place labeled "Worser," and the first place award labeled "Worst." His targets have ranged from dumb criminals to politicians and public figures, many of whom have simply made controversial statements upsetting to Olbermann. MRC analysts examined every "Worst Person" segment, beginning with the first installment on June 30, 2005, and ending with June 23, 2006. The total number of nominees counted during the period was 592. Of these, 197, or about one-third, were politically salient figures. Out of these 197 nominees, there were 174, or 88 percent, that featured an attack on a conservative target or ideas, compared with 23 nominees, or 12 percent, that featured an attack on liberal targets or ideas. A list of all politically relevant nominees were compiled for the latest Media Reality Check.

If one focuses strictly on high-profile politicians -- those elected either to a federal or statewide office, including close aides -- the numbers are even more heavily tilted against conservatives. Attacks on Republicans outnumber attacks on Democrats by 25 to 2. Not only was it rare for Olbermann to nominate a liberal for the "Worst Person" dishonor, but he once even referred to former Democratic Senator Max Cleland as "one of the best" during a "Worst Person" segment in which he apologized for the fact that during the same segment the night before, his staff had accidentally displayed Cleland's photo while Olbermann was attacking right-leaning radio host Neal Boortz, whom the Countdown host labeled a "radio babbler" and a "racist." 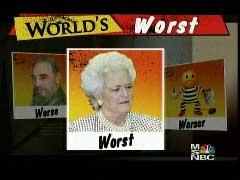 Olbermann has used these segments to make a number of his more biting insults at conservatives. One of his most outrageous "Worst Person" installments blasted former First Lady Barbara Bush over a donation she made to a Hurricane Katrina relief fund because she required that some of the money be used by schools to buy a software program from her son Neil's company. Without noting that the Bush family had given additional donations to the Katrina fund without any requirement as to how they should be spent, Olbermann snidely took aim at the former First Lady: "You'd think if a woman has reached her 80th birthday she'd understand that if you make a donation to charity, then make the charity give the donation to your son, it's not a damned donation anymore! Barbara Bush, today's 'Worst Person in the World'!"

Although Olbermann once proclaimed that, while it's "naive and old-fashioned" of him, he felt that "you should reserve those terms like 'idiot' exclusively for men" (while defending his choice to call conservative columnist Michelle Malkin a "fool"), apparently he has no problem tagging females with other derogatory labels. After recently turning his "Worst Person" fire toward Malkin, in his first of two shots, he referred to Malkin as "crazier and dumber than we all thought," and on another occasion called her a "nitwit." Well, as Olbermann might say, at least he didn't call her an idiot.

Conservative talk radio host Rush Limbaugh has been a perennial target. The Countdown host has made multiple references to Limbaugh's prescription drug addiction, once quipping that "painkillers wipe out your memory along with your ethics." Olbermann has also taken to mocking the radio host as "comedian Rush Limbaugh." Olbermann also found time to label the American Values Foundation as "homophobes," accused a Utah woman of "bigotry" for opposing the showing of the gay-themed Brokeback Mountain in a local theater, and tagged intelligent design proponents as "the same people who brought you 'the world is flat, the earth is at the center of the universe, and let's burn a scientist at the stake today.'"

Olbermann has even targeted young conservative activists, once ridiculing a Young Republicans president in Pennsylvania for stating that America had eliminated the torture rooms in Iraq. Grotesquely implying a similarity between the treatment of prisoners by American troops to the horrific treatment of those jailed under Saddam Hussein's regime, Olbermann snidely quipped: "You might want to skip the 'eliminating torture' part." The MSNBC host was also alarmed that a conservative UCLA alumni group wanted to combat the problem of liberal professors trying to indoctrinate their students, as the Countdown host tagged the Brewen Alumni Association a "radical group" and wondered how its founder graduated.

The only three major public figures who were either liberals or were attacked from the right were New York Comptroller Alan Hevesi, for saying Senator Schumer would shoot President Bush if he could; Representative Cynthia McKinney for striking a police officer; and Nation of Islam leader Louis Farrakhan for advancing the theory that the levees in New Orleans were blown up with explosives. Notably, each of these three nominees only scored the second place title of "Worser" while numerous conservative figures were dishonored with the first place title of "Worst."

During the past year, Olbermann found few on the far left that inspire him for inclusion in his "Worst Person" segment, while notably using the far left Media Matters for America as a frequent source to attack conservative targets. Other liberals escaping Olbermann's wrath were Democratic Congressman William Jefferson, who was caught storing cash in his freezer in a bribery scandal; and film maker/propagandist Michael Moore, who was recently sued by an Iraq War veteran for including a clip of him in Fahrenheit 9/11 without permission. In direct contrast to the Moore story, Olbermann once made room to attack the operators of the Republican National Committee Web site over an ad attacking anti-war Democrats because of the inclusion of music without permission that was composed by song writer and Iraq War critic Jim Capaldi. But when wounded veteran Paul Damon, a self-described supporter of the Iraq War, filed a suit against Moore for including a clip of Damon without permission to attack the war, Olbermann saw no need to include Moore in his dishonors list. 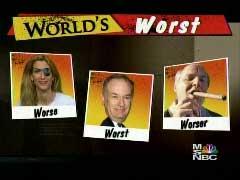 Olbermann has also made ongoing sport of attacking Fox News. FNC anchors, employees or the network in general have been nominees 66 times. Of those, 58 were on-air personalities -- including Bill O'Reilly, Brit Hume, John Gibson, Morton Kondracke, David Asman, and Geraldo Rivera. On one occasion, Olbermann even referred to FNC as the "Fox Naz-, uh, Fox News Channel."

This is especially notable considering that in June 2005, on his Bloggermann site, the MSNBC host scolded public figures who use Nazi references, saying, "There's no place for the reference in this culture," and that the analogies are "wrong, offensive and deeply hurtful." An ironic statement coming from Olbermann, a man who remarked in 1998 that former Independent Counsel Kenneth Starr reminded him of Heinrich Himmler, a Nazi war criminal; and who last March, appearing on The Colbert Report on Comedy Central, compared the harassment of some of O’Reilly’s callers by Fox security to tactics used in Nazi Germany. Olbermann: "Which is, you know, fascinating if, you know, we're living in, say, Nazi Germany, it’s a good idea."

Strikingly, as an illustration of how strong an anti-O'Reilly vendetta resides within Olbermann, 42 of the Countdown host's attacks on FNC personalities targeted O'Reilly. In fact, on one night Olbermann reserved all three slots for O'Reilly, whom Olbermann sometimes refers to as "the big giant head" or "Ted Baxter," an unflattering reference to a character from The Mary Tyler Moore Show. The MSNBC host once even ended the segment by bizarrely playing an audio clip of Stewie Griffin, the baby from The Family Guy, voiced by Seth MacFarlane, as the cartoon character said, "Bill, hold still. Allow me to soil myself upon you. Victory is mine!"

In the first of several attacks on another FNC host, Olbermann distorted the context of a comment from John Gibson in which Gibson was discussing the general principle of tolerating other religions on Earth and leaving it to God to decide which religion is right. But Olbermann twisted Gibson's words to portray the FNC host as intolerant, comparing him to "religious nutbag terrorists" and claiming Gibson had revealed "a very ugly side to himself." In a later show, the MSNBC host rationalized his "Worst Person" attack on Gibson by playing a clip of Gibson from the Janet Parshall Show, and compared the exchange with Parshall to "an all-access Al-Qaeda show on Al-Jazeera talking about infidels," before calling on the FNC host, whom Olbermann claimed was once a friend, to "leave the airwaves for good" because he has "forfeited his right to stay here." Perhaps the same could be said of Olbermann.