CBS Describes Bush Plan as 'Escalation,' Ignores Near Even Split In Its Own Poll 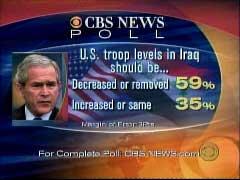 On Monday's CBS Evening News, White House reporter Jim Axelrod adopted Democratic terminology as he referred to President Bush's plan to call “for an escalation in the number of U.S. troops in Iraq.” Axelrod later applied the more Bush-friendly term of “surge,” but he also presumed the election was all about Iraq and not congressional Republican malfeasance in the Foley matter: “He'll be going against what voters said they wanted last November, and what the new Democratic leaders in Congress say they want right now.”

Axelrod soon highlighted how “a new CBS News poll out tonight indicates nearly six in ten Americans either want troop levels lowered or a full withdrawal." An on-screen graphic pegged the numbers at 59 percent wanting troops in Iraq “decreased or removed” and 35 percent wishing them “increased or the same.” But in citing only that one poll finding which combined answers, Axelrod skipped how the public is nearly evenly split on a “short term troop increase to stabilize Iraq,” with 45 percent in favor and 48 percent opposed. Furthermore, the PDF of the poll results reported that “those with friends and relatives who have served in Iraq are a bit more supportive of the idea than Americans overall” with 50 percent in favor and 44 percent opposed.

The CBS News poll was conducted January 1-3, last Monday to Wednesday, so CBS held it for several days. Neither ABC or NBC rushed polls for Monday night to show public opposition to Bush's expected plan scheduled to be announced during a Wednesday night speech at 9pm EST.

The MRC's Brad Wilmouth corrected the closed-captioning against the video to provide this transcript of the January 8 CBS Evening News story:

Katie Couric: "Jim Axelrod at the White House with the latest on the President's plan. Jim, this is one of the most important speeches the President has ever given, right?" 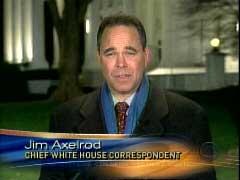 Jim Axelrod, on the White House lawn: "Well, Katie, in some form or fashion, this is a speech the President and his aides have been working on since last election day. And when the President calls for an escalation in the number of U.S. troops in Iraq, he'll be going against what voters said they wanted last November, and what the new Democratic leaders in Congress say they want right now. The President's plan will apparently include a surge of 20,000 troops, up to a billion dollars more for an economic jump start, and a set of benchmarks the Shiite-dominated Iraqi government must meet in reconciling with the Sunnis. But it's the idea of sending more troops that's most controversial. A new CBS News poll out tonight indicates nearly six in ten Americans either want troop levels lowered or a full withdrawal. [on-screen, decreased or removed: 59%; increased or same: 35%]"

Nancy Pelosi, House Speaker: "Congressional oversight is alive and well in the Congress of the United States."

Axelrod: "Nancy Pelosi, who became House Speaker due to voter dissatisfaction with the President's Iraq policies, is also turning up the pressure. She says Democrats would never cut funding for troops already there, but there's no blank check for an escalation."

Pelosi: "We must know what the ground truth is in Iraq before we lose any more lives, cost any more monies, have a cost to our budget, our reputation."

Axelrod: "The President may not see the midterm elections as a call to withdraw troops, but Gordon Smith, the Republican Senator who's critical of a surge, met with President Bush today, and says the President understands exactly what's at stake now."

Senator Gordon Smith (R-OR), outside White House: "Well, I think the President understands the gravity of it. I think he understands he's betting his presidency, his place in history, on this coming out well."

Axelrod: "The idea of sending more American troops to secure Baghdad has been tried before -- last summer 12,000 troops. But Operation Together Forward failed, largely because Iraqi security forces couldn't hold what American troops had cleared. Katie?"

Couric: "Jim, right after the President announces his new policy, what will he do to sell it?"

Axelrod: "Actually, the first place he's going to go is to Georgia. The sister installation of where you're at, Katie, Fort Stewart, is Fort Benning. One brigade of the Third Infantry Division is at Benning. They're set to ship out to Iraq next month. They could be part of the surge."