NBC's Tom Costello made a gaffe of planetary proportions on Saturday's Nightly News as he reported on the launch of NASA's latest Martian rover. The correspondent identified the rocket, which blasted the unmanned Mars Science Laboratory (MSL) probe into space for its eight month-plus journey to the fourth planet, as a "Saturn V." This is actually the name of the rocket that took Apollo astronauts to the Moon in the late 1960s and early 1970s. The last Saturn V flew in 1973.

The expendable rocket that actually blasted off on Saturday morning, taking MSL and its Curiosity rover beyond the Earth's atmosphere, is the Atlas V. It is the newest member of a rocket family that has been in service since the 1950s. John Glenn became the first American to orbit the Earth in 1962 after a modified first-generation Atlas launched his Mercury capsule into space.

With Poverty on the Rise, NBC Urges More Welfare Spending; No Blame for Obama

On Friday's NBC Today, correspondent Tom Costello described how "Nearly one in six Americans is living in poverty. 16 million are children. That's 3 million more than three years ago." However, nowhere in his report on the growing problem did he mention the Obama administration's failed economic policies as a cause.

Instead, Costello lamented over possible cuts to government welfare programs: "It was 50 years ago that Sergeant Shriver led President Johnson's war on poverty. Today his son, Mark, runs Save the Children in the U.S....[and] fears that programs like Head Start, which serve poor children, might face cuts in the next round of congressional budget cuts, just as more and more families find themselves struggling to put food on the table."

At the top of Wednesday's NBC Today, co-host Matt Lauer warned: "Record flooding in the wake of Irene leading to new evacuations and dramatic rescues across the Northeast....As FEMA's disaster fund runs dangerously low." Moments later he announced the agency was "running into a serious money crunch because of Irene and in-fighting in Washington."

In a later report, correspondent Tom Costello singled out those responsible for the "infighting": "You can blame politics and the new budget realities. The Republican-controlled House already voted to give FEMA another $1 billion this fiscal year, but that increase is tied to budget cuts elsewhere. So Senate Democrats haven't acted."

NBC Wonders: Can America 'Afford Not to' Spend Billions on High-Speed Rail?

On Thursday's NBC Nightly News, anchor Brian Williams praised China's high-speed rail system and lamented that United States had not done the same: "China is rocketing ahead of the U.S. with high-speed rail. And it has a lot of people wondering how long we can keep chugging along the same old track."

Touting the completion of a new rail line between Beijing and Shanghai, Williams proclaimed: "Which raises again the question, when it comes to trains, why is America, home of the iron horse and the golden spike, still on the slow track?" Correspondent Adrienne Mong filed a report riding the rails across China, touting the high-speed system as "smoother, sleeker, greener than a jet plane."

NBC Touts SUVs as Among Safest Vehicles to Drive

NBC's Saturday Today show ran a piece recounting recent car safety tests which find that large vehicles like SUVs are among the safest vehicles to drive. The same vehicles that used to receive much negative attention from the media because of rollover accidents and lower fuel efficiency seem to have seen improvements in the likelihood of rollovers. NBC correspondent Tom Costello on Saturday gave a positive review of SUVs and other large vehicles. Anchor Amy Robach introduced the report citing "surprising findings" of safety tests.

Costello soon informed viewers: "The Insurance Institute for Highway Safety reports today the overall safest vehicles on the road are minivans, with 25 deaths per million registered vehicles. SUVs are close behind with 28 deaths per million vehicles. And that's a surprise since just a few years ago, SUVs were prone to rollovers and considered dangerous."

An otherwise straightforward report on bad economic news on Friday's NBC Today cited economist Diane Swonk, who argued government stimulus prevented things from getting worse: "We basically had a massive coronary during the financial crisis....Financial stimulus and monetary stimulus, you know, got us to the stage where we're healing but we're in still in a lot of rehab."

Correspondent Tom Costello set up the sound bite by declaring: "To get things moving, the government has already cut payroll taxes while the Fed has  pumped in $600 billion of stimulus money." He lamented: "But more government spending is unlikely given the political battle over the debt ceiling in Washington."

On Friday morning, NBC's Tom Costello couldn't close his Today show report on high gas prices without airing the proverbial soundbite from an angry gas station customer accusing oil companies of gouging the consumer. Costello even managed to taint Big Oil with the Watergate scandal, in his set-up for the perturbed gas pumper, as he pointed out one of the highest prices he found in Washington D.C. was "right in the shadow of the Watergate" adding, "customers across the country are increasingly suspicious of the oil companies."

(video and transcript after the jump)

NBC's Today on on Monday offered the most sympathetic take on the growing outrage over invasive pat downs being conducted at airports by the Transportation Security Administration. While ABC highlighted "outrage" and CBS observed how some find the procedures "violating," Today host Matt Lauer worried about the government "caving" on the policy.

All three morning shows interviewed TSA Administrator John Pistole. But, only Matt Lauer fretted, "...I hate to even think of what happens if the government caves in on this, and relaxes these procedures, and someone manages to get something on board a plane and causes harm. Imagine the questions you'll be asked at that point."

Lauer asserted that with the comparatively small number of people complaining, the anger could be "overblown." While all three programs played a clip of Barack Obama critiquing the screening program, Today, Good Morning America and The Early Show failed to portray the controversy as a problem for the White House.

By Geoffrey Dickens | August 27, 2010 11:02 AM EDT
NBC's Tom Costello, on Friday's Today show, in previewing Glenn Beck's rally at the Lincoln Memorial this weekend, focused on the racial insensitivity of the Tea Partiers as he reminded NBC's viewers that at last year's  rally in Washington "there were a lot of signs that had rather racist overtones. The concern is that might be repeated this time. By the way, many Beck followers, who are coming, are being urged to avoid African-American areas and avoid conflict."

Costello began his story noting that while "Glenn Beck says that Dr. King is a hero of his" he is still "defiant in his right to be here" and then went on to cite political analyst Stu Rothenberg in insisting "this weekend's event could carry risk for Republicans."

The following is the full Costello story as it was aired on the August 27 Today show: 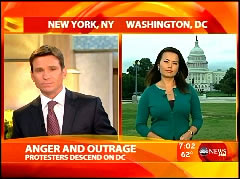 Over the weekend, ABC provided hyperbolic, worried reporting on the 9/12 protest in Washington D.C. And while the other networks had mixed results, Good Morning America co-host Bill Weir opened the program on Saturday by fretting, "This morning, outrage. Protesters descend on Washington to rally against the President's health care plan. As civility gives way to shouting, what's fueling all this anger?"

On Sunday’s GMA, Weir spun that the protesters were "rail[ing]" against higher taxes, government run health care and spending. Reporter Yunji de Nies highlighted a marcher who labeled Barack Obama a "communist." She then pounced, "Do you really believe the President is a communist?" Right after this exchange, de Nies told viewers that those rallying "insist they're not extremists."

"But on Wall Street today and overseas, travel-related stocks took a beating over flu fears," NBC correspondent Tom Costello said on the April 27 "NBC Nightly News," reporting that U.S. airline stocks were hit hard, down a little over 8 percent on the news.

Costello then ran video of Moody's Economy.com chief economist Mark Zandi, who lived up to his reputation for being very pessimistic in his economic forecasts and warned that things may get worse.

"If this lasts two months and spreads across the globe, then the global downturn will intensify," Zandi said. "Millions of more jobs will be lost, unemployment will rise, and this recession will last well into 2010."

Gibbs Does It Again -- Responds Directly to Media Criticism of Obama, This Time CNBC's Cramer

Here we go again - another Obama administration/media personality feud in the works.

During the March 3 White House press briefing, Tom Costello of NBC News asked Gibbs to respond to remarks from Cramer, who was described as "not a conservative," made on NBC's March 3 "Today" show that he "thought the president's policies, his agenda had contributed to the greatest wealth destruction he's ever seen by a president."