FNC’s Liasson: Send off Pelosi ‘In a Blaze of Glory’ Like Churchill After ‘Historic’ Accomplishments

On this past weekend’s Fox News Sunday, panel member Mara Liasson - also of NPR - invoked the name of Winston Churchill as she recommended that House Democrats send off Nancy Pelosi "in a blaze of glory" after having "accomplished historic things," rather than keep her on as party leader in the House. Liasson:

Nancy Pelosi did two things for which she will go down in history. She was an incredibly effective majority leader when, and Speaker, there was an opposition President. She helped make the majority. And when she was in the majority, she was the hammer that got through President Obama’s agenda and sent it to the Senate. However, that is a completely different role than what she wants to do now. For which, I think she’s kind of like Winston Churchill. I mean, she accomplished historic things for the Democrats, and they should be sending her off in a blaze of glory and adjusting for this new regime.

Panel member Brit Hume took exception with Liasson connecting Churchill and Pelosi. After Hume argued that "the difference between her and Winston Churchill is that Winston Churchill was turned out after he led his country to a great victory," leading Liasson to respond that she agreed Pelosi "should be turned out," the exchange continued: 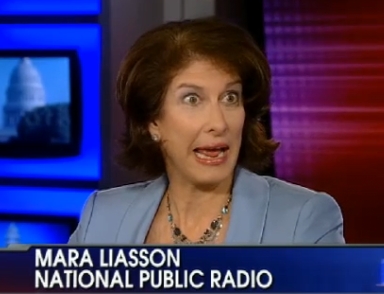 NPR's Mara Liasson on Thursday made a truly astonishing and frightening comment: the crisis in Greece, with the government slashing spending and raising taxes in such a fashion that people are rioting in the streets, could happen in America.

"Greece, whose debt is now I think 115 percent of GDP, ours is about 84 now, and they had to impose some tough austerity measures which means tax hikes and spending cuts, and the people of Greece as you can see didn't like it one bit and rioted," Liasson said on Thursday's "Special Report" on Fox News.

"This in a much more horrific way, much bigger way, is our problem," she continued.

"We have unsustainable deficits that are going to have to be cured with something similar" (video follows with partial transcript and commentary):

By Mike Sargent | December 7, 2009 11:29 AM EST
For the dog-bites-man news category: Joe Scarborough had a moment of intellectual schizophrenia today.

Scarborough pointed out the obvious:

The Obama Administration isn't the only government-funded entity campaigning against Fox News.  "NPR reporter pressured over Fox role" headlines an article by Josh Gerstein on Politico's Web site.  It begins:

Executives at National Public Radio recently asked the network’s top political correspondent, Mara Liasson, to reconsider her regular appearances on Fox News because of what they perceived as the network’s political bias, two sources familiar with the effort said.

According to a source, Liasson was summoned in early October by NPR’s executive editor for news, Dick Meyer, and the network’s supervising senior Washington editor, Ron Elving. The NPR executives said they had concerns that Fox’s programming had grown more partisan, and they asked Liasson to spend 30 days watching the network.

At a follow-up meeting last month, Liasson reported that she’d seen no significant change in Fox’s programming and planned to continue appearing on the network, the source said.

Juan Williams: Why Is Olbermann Allowed To Announce NFL Games?

In the midst of this week's controversy surrounding Rush Limbaugh's failed bid to become a part owner of the St. Louis Rams, one liberal media member has been pounding the table concerning some of the hypocrisy involved: National Public Radio's Juan Williams.

On Sunday, Williams continued to expose the media's double-standard by pointing out how absurd it is that Limbaugh isn't allowed to be an NFL team owner, but MSNBC's Keith Olbermann can be involved in "Sunday Night Football" broadcasts.

Williams made this marvelous point during the panel discussion segment of "Fox News Sunday" (video embedded below the fold with partial transcript, h/t Story Balloon):

Can you say "bitter"? That's the vibe Slate.com Editor-in-Chief Jacob Weisberg gave off in an Oct. 17 column, which will appear in the Oct. 26 issue of Newsweek, about Fox News headlined "The O'Garbage Factor."

Weisberg, who once diagnosed former President George W. Bush with a learning disability, contends the Fox News Channel goes beyond just making liberal media elitist like himself cringe - it's actually un-American. Weisberg alluded to the recent rift between the White House and the Fox News Channel.

He contended, with an almost-overdone effort to be self-righteous and snarky, that the analysis of the feud, done on a recent broadcast of "The O'Reilly Factor," was all just too slanted for his tastes. He went along with the left-wing noise machine's notion that Bill O'Reilly, who isn't exactly a Reagan Republican, is some sort of tool of the right-wing.

NPR ombudsman Alicia Shepard has focused again on what NPR reporters say on Fox News. Reporter Mara Liasson infuriated the liberal listeners of the taxpayer-funded network when she proclaimed on Tuesday's Special Report that "Cash for Clunkers is like a mini-Katrina here," Liasson said. "It's not good to start a government program and not be able to execute it." 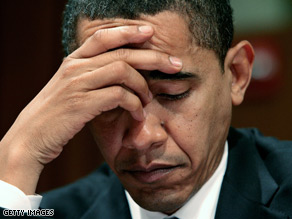 NPR on Wednesday released results of a new poll finding declining support for President Obama and his healthcare initiative while also showing a tightening in which Party folks plan to vote for in the 2010 elections.

Also of note was the glaring difference between those believing the country is going in the wrong track versus the right track with those feeling the former exceeding the latter by a greater margin than has been seen in over a year, and the highest since the financial collapse last September.

Though none of this is surprising given other polling data of late, it is interesting to see this coming from NPR.

The results were published in an online article as well as discussed on Wednesday's Morning Edition (audio embedded below the fold, h/t Soren Dayton):

Hume on Gates Affair: President Who's Always Apologizing For America Couldn't Apologize For Himself

"This president who travels the world apologizing for his country couldn't quite apologize for himself."

So said Brit Hume on the most recent installment of "Fox News Sunday" as the panel discussed Barack Obama's handling of the Henry Louis Gates affair.

Adding insult to injury, there was virtual unanimity that the President erred in this matter, and erred badly (video embedded below the fold with partial transcript):

For the second time in less than 48 hours, NPR's Juan Williams accused the press of not doing their job in properly reporting the deeds and doings of America's new President Barack Obama.

Having accused the news media of "kowtowing to the Obama administration" during Friday's "Special Report" on FNC, Williams went even further on Sunday's "Fox News Sunday" (h/t Jennifer Rubin):

[W]hat really, you know, strikes me is the celebrity nature of the treatment, the coverage of him as a celebrity versus the policy-maker...So you know, the problem here is he's not being treated as a politician. The press is not being sufficiently adversarial, which is its role, to hold him accountable.

What follows is an embedded video of this entire extremely candid discusion of the press's abdication of journalistic integrity along with a transcript:

Update: The highlight thus far is the testy exchange between Gibbs and Tapper. Checking the tape again it appears he did answer Tapper's second question, albeit tersely muttering the response, before turning to Chuck Todd of NBC.

Gibbs starting press conference about 10 minutes late, at 2:10. Says was late getting started due to news about Associate Justice Ginsburg's pancreatic cancer surgery.

14:14, female reporter notes more "combative" tone to Obama's talk on stimulus, asks if he's "given up on bipartisanship"

sorry for the gap, had Internet connection problems for a few minutes.

14:19, Ed Henry: President talked about the trillion dollar deficit, why then if that's a failure does he want to add $8 or $9 billion on top of that?

14:20, Henry: Paid for with a cigarette tax but we're not sure how many are going to buy cigarettes

14:24, Jake Tapper, ABC News: Can we get copy of the waivers for former lobbyists given by the OMB. It's not available by email or the Web, can we get them.

Once again I'm going to live-blog the daily press briefing. I'll be focused on the reporters' questions, not so much Gibbs's answers. I also caution this is a rough transcript and may contain errors. I hope to render as accurate a depiction as possible of the questions asked and who's asking them.

As a little twist, I'll also try Twittering some comments on my Twitter page, @KenShepherd.