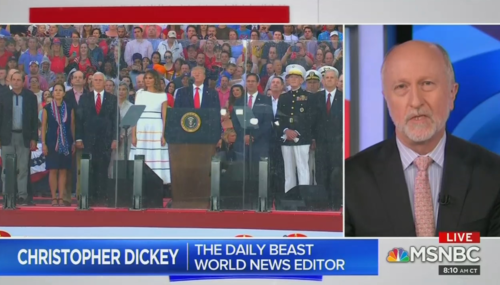 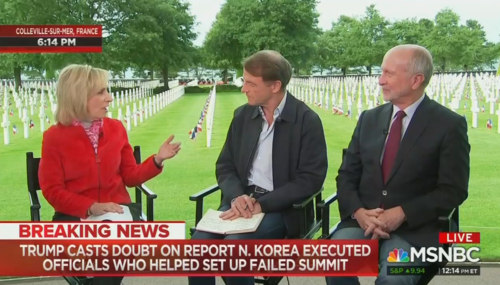 Kyle Drennen
June 5th, 2019 4:00 PM
Never wasting an opportunity to attack President Trump, on Wednesday, MSNBC anchor Andrea Mitchell and her guests did so as they sat alongside the military cemetery in Normandy, France, the final resting place of those who died in the 1944 allied D-Day invasion. Reporting from the site ahead of Thursday’s memorial service marking the 75th anniversary of the brutal battle, the panel of journalists… 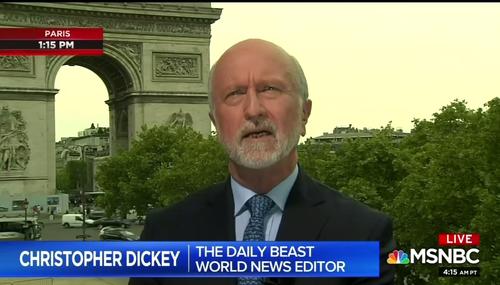 Brad Wilmouth
May 12th, 2018 3:46 PM
Appearing as a guest on MSNBC Live on Saturday morning, MSNBC contributor and Daily Beast world news editor Christopher Dickey blamed the recent exchange of fire between Israel and Iran on Israeli Prime Minister Benjamin Netanyahu believing that he has been given a "license to kill" by Trump pulling out of the Iran deal. Not mentioned was that it was the Iranian military that fired first from… 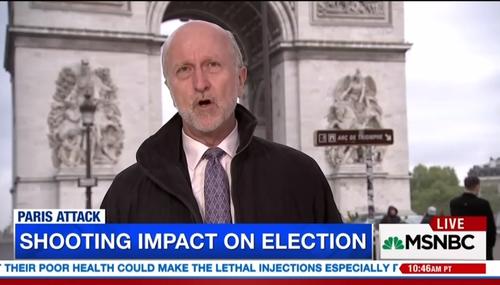 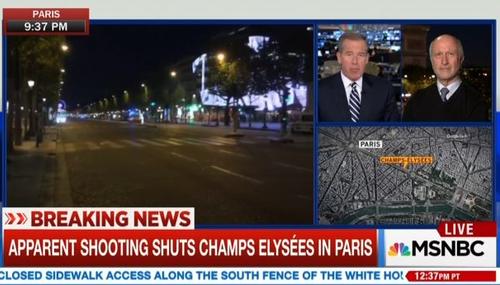 Kyle Drennen
April 20th, 2017 4:56 PM
Appearing on MSNBC in the 3 p.m. ET hour on Thursday, during breaking news coverage of a shooting along the Champs Elysees in Paris, Daily Beast World News Editor Christopher Dickey was more worried by the prospect of France’s “very far-right party” using the incident as an issue in the nation’s upcoming presidential election than he was with the welfare of people caught up in the violence. 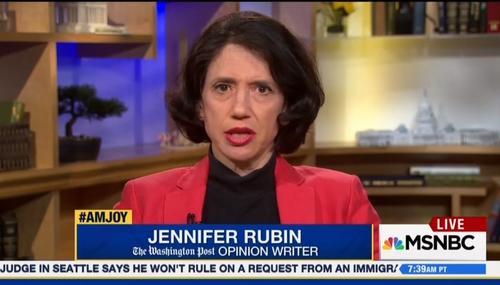 Brad Wilmouth
March 19th, 2017 10:44 PM
On Saturday's AM Joy on MSNBC, during a discussion of the defeat of right-wing politician Geert Wilders's political party in the Netherlands, MSNBC analyst Christopher Dickey derided Donald Trump as a "right-wing extremist" and "lunatic" who is "nuts" as he theorized that Europeans are rejecting such politicians because of the U.S. President. And recurring MSNBC guest and Washington Post… 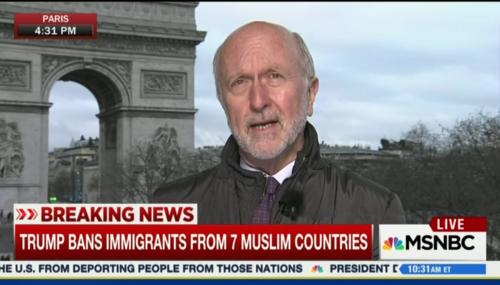 MSNBC's Dickey Likens Trump to 'Fascism,' EU Thinks 'Out of His Mind'

Brad Wilmouth
January 29th, 2017 10:07 PM
On Sunday's AM Joy on MSNBC, during a discussion of European reaction to President Donald Trump's ban on immigration from seven predominantly Muslim countries, MSNBC contributor and Daily Beast world news editor Christopher Dickey asserted that most Europeans believe Trump is "out of his mind," and charged that he is behaving like an "autocrat." 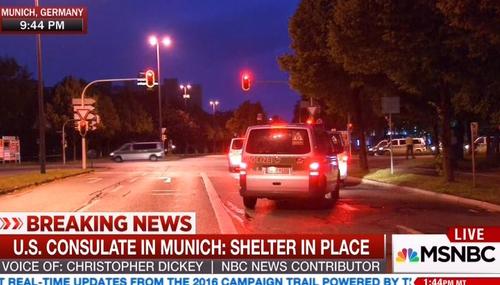 Scott Whitlock
July 22nd, 2016 4:45 PM
MSNBC on Friday used the unfolding shooting spree in Munich to bash the Republican Party and connect the GOP convention to it. Regarding terror, Daily Beast editor Christopher Dickey talked to Brian Williams and lectured, “What we're looking at now in Europe and, to some extent, at the Republican convention and in the discourse in the United States, is a lot of talk about war as if we're talking… 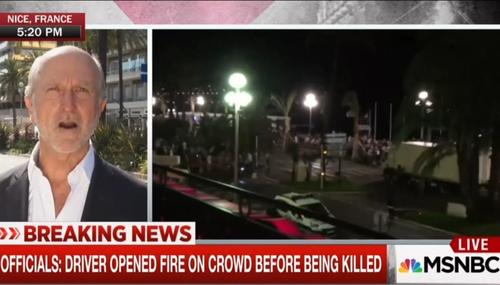 Dickey: France ‘Not Alabama,’ Can’t Get Guns ‘In Any Old Store'

Kyle Drennen
July 15th, 2016 1:44 PM
Appearing on MSNBC in the 11 a.m. ET hour on Friday, Daily Beast editor and NBC News contributor Christopher Dickey was confounded by the idea that the terrorist who launched Thursday’s attack on France was heavily armed: “...where the hell did he get those arms? I mean, this is not Alabama or South Carolina or Texas. You just can't go buy automatic pistols in any old store in town by showing… 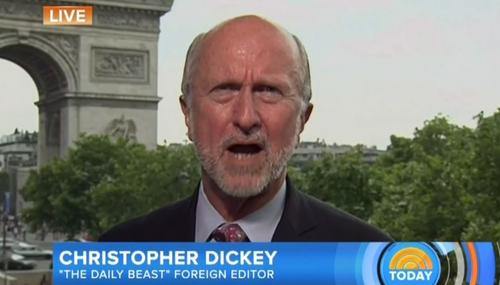 Kyle Drennen
June 24th, 2016 11:18 AM
Appearing on NBC’s Today, analyst and Daily Beast editor Christopher Dickey launched into a tirade against Britain’s vote to leave the European Union: “...they claim it says, right off the bat, is that they were tired of all the bureaucracy of the European Union, they didn’t want all the constraints, they want their sovereignty. But what this was really about is fear, xenophobia, in some cases,… 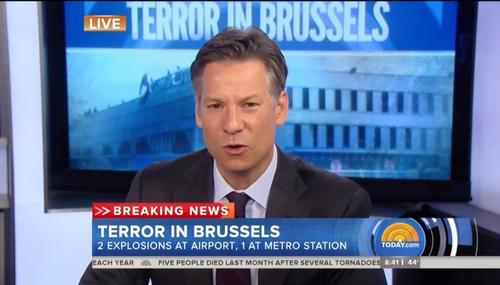 Brent Bozell and Tim Graham
March 22nd, 2016 10:40 PM
The smoke hadn’t cleared from the airport in Brussels and already the press was issuing its typical lament: This will only stoke Europe’s “right wing” and spread “rampant Islamophobia.” NBC’s Richard Engel complained on the “Today” program that “We're already seeing the rise of the right wing. We're already seeing rise of hate attacks, where people will use the kind of terrorist attacks, these… 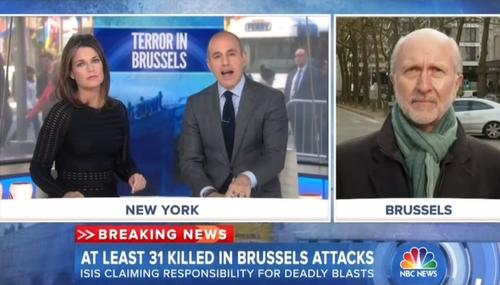 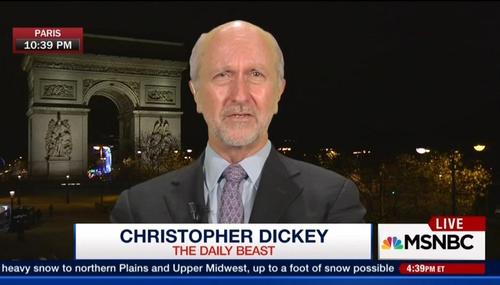 Matthew Balan
December 7th, 2015 4:45 PM
On Sunday, The Daily Beast's Christopher Dickey furiously tried to connect the Second Amendment to the protection of slavery before the Civil War. Dickey touted how Charles Dickens and "several British visitors to American shores...discerned... [that] people who owned slaves...wanted to carry guns to keep the blacks intimidated and docile." He also wildly claimed that "the Second Amendment...was… 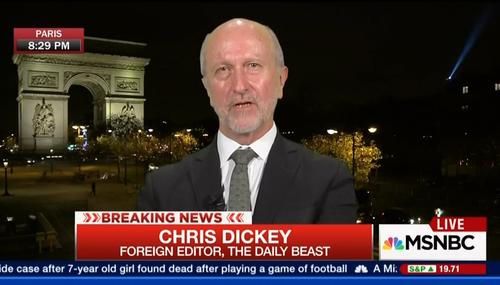 MSNBC Guest: 'Shameful' for US to Bar Refugees, Will 'Earn' 'Hatred'

Brad Wilmouth
November 17th, 2015 1:35 AM
Daily Beast Foreign Editor Christopher Dickey made another MSNBC appearance on Monday afternoon, this time on MSNBC Live with Thomas Roberts, where he again went after the "right wing" over negative reaction to taking in Muslim refugees in the aftermath of the Paris terrorist attacks. He also declared that it was "shameful" that some U.S. politicians are pressuring against Syrian refugees being…