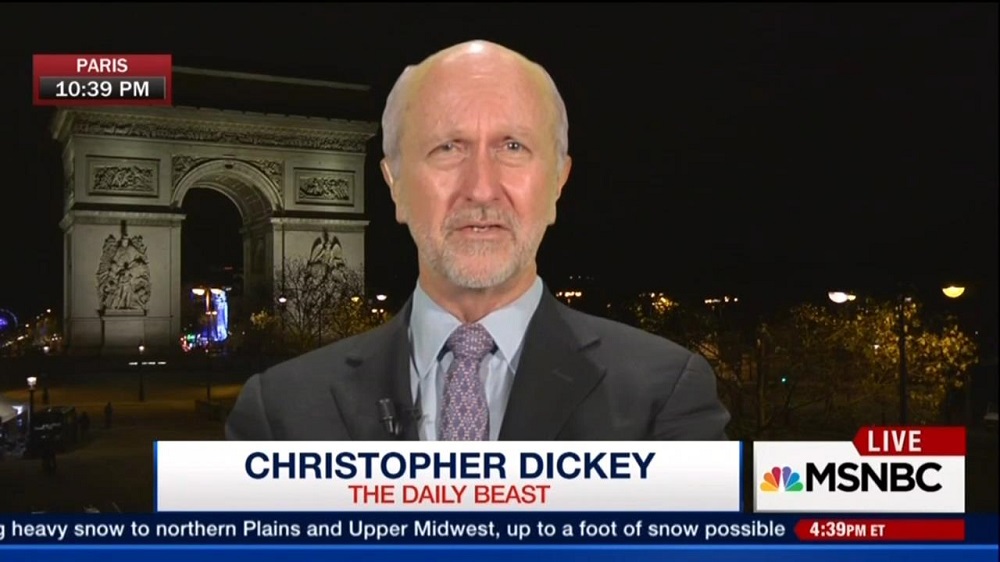 On Sunday, The Daily Beast's Christopher Dickey, a veteran of Newsweek and the Washington Post, furiously tried to connect the Second Amendment to the protection of slavery before the Civil War. Dickey touted how Charles Dickens and "several British visitors to American shores...discerned...[that] people who owned slaves...wanted to carry guns to keep the blacks intimidated and docile." He also wildly claimed that "the Second Amendment...was essentially written to protect the interests of Southerners" to crush slave revolts: "To keep slaves in slavery, you needed militias and they needed to be armed. Such is the fundamental 'right' assured by the Second Amendment."

The Paris-based news editor led his article, "The U.S. 'Right' to Own Guns Came With the 'Right' to Own Slaves" (which carried the sub-headline, "The grim history of gun violence in the United States goes way back, aided and abetted by the same monstrous reasoning that once defended slavery") by channeling Fareed Zakaria's point about people overseas being "alarmed" by guns in the U.S.: "For most of the last two centuries, Europeans have been puzzling over their American cousins' totemic obsession with guns and their passion for concealed weapons." He continued by citing Charles Dickens's commentary about his visit to the former colonies:

In 1842, the novelist Charles Dickens, on a book tour of the United States, saw a link between the sheer savagery of slave ownership and what he called the cowardly practice of carrying pistols or daggers or both. The author of Oliver Twist listened with a mixture of horror and contempt as Americans defended their utterly indefensible "rights" to tote guns and carry Bowie knives, right along with their "right" to own other human beings who could be shackled, whipped, raped, and mutilated at will.

Dickey added that "Dickens also compiled a list of several shooting incidents, not all of them in the South: a county councilman blown away in the council chamber of Brown County, Wisconsin; a fatal shootout in the street in St. Louis; the murder of Missouri's governor; two 13-year-old boys defending their 'honor' by dueling with long rifles, and other examples." He also cited Dickens's mocking of his American cousins on the issue of personal weapons:

What could one expect, he [Dickens] asked, of those who "learn to write with pens of red-hot iron on the human face" but that they carry guns and daggers to use on each other. "These are the weapons of Freedom," Dickens wrote with brutal irony. "With sharp points and edges such as these, Liberty in America hews and hacks her slaves; or, failing that pursuit, her sons devote themselves to a better use, and turn them on each other."

The Daily Beast editor used these Dickens references to set up his barrage on the Second Amendment:

When Dickens was writing in the 1840s, remember, keeping Negro slaves was defended as a Constitutional right with the same vehemence that we hear today when it comes to keeping and bearing arms, and perhaps with more foundation....The Second Amendment, adopted...as part of the Bill of Rights (of free white people), was essentially written to protect the interests of Southerners in the states that formed militias—often known as "slave patrols"—to crush any attempt at what was called, in those days, a "servile insurrection." That's why the full text of the Second Amendment reads:

"A well regulated Militia, being necessary to the security of a free State, the right of the people to keep and bear Arms, shall not be infringed."

To keep slaves in slavery, you needed militias and they needed to be armed. Such is the fundamental "right" assured by the Second Amendment.

Dickey never cited any of the American Founding Fathers or any historical analysis on the Second Amendment to support his contention that it was included "to protect the interests of Southerners." The survivors of the Massachusetts militias that participated in the early battles of the War for Independence certainly weren't protecting slavery when they resisted the British at Lexington and Concord. In fact, they were trying to stop General Gage's men from seizing the arsenal that the Minutemen had amassed at Concord.

Interestingly, Lysander Spooner, who was a noted abolitionist in the 19th century, also defended the Second Amendment, as a justification to arm slaves to revolt against their oppressors:

...These provisions obviously recognize the natural right of all men 'to keep and bear arms' for their personal defence; and prohibit both Congress and the State governments from infringing the right of "the people "...This right of a man "to keep and bear arms," is a right palpably inconsistent with the idea of his being a slave. Yet the right is secured as effectually to those whom the States presume to call slaves, as to any whom the States condescend to acknowledge free.

After citing two more 19th century British writers on "Southern paranoia" regarding slave revolts and the apparent commonality of duels in the South, the editor underlined that "it is a grim irony, therefore, that the legal precedents set in the antebellum South are still with us today, embedded in recent federal court rulings that make it easier and easier for more people to carry guns." He then cited a September 2015 article by two left-leaning academics in The Atlantic (titled, "The Slave-State Origins of Modern Gun Rights"), who asserted that "gun-rights advocates find themselves venerating a moment at which slavery, honor, violence, and the public carrying of weapons were intertwined."

Dickey ended his piece by paying tribute to the British writers that he cited:

Back in the day, what Dickens, Russell and Bunch understood was a basic truth that seems to have escaped our contemporary legislators and jurists, just as it did those of the slave-holding South. As Russell observed in Mississippi, the government seemed unable and unwilling to rein in gun violence, and the consequences would be inevitable. "The country in which it is tolerated," he wrote, "will become as barbarous as a jungle inhabited by wild beasts."

Day after day, week after week, we see in America the toll taken by gun "rights," whether the shooters wear beards and veils and murder colleagues in California in some bizarre Bonnie-and-Clyde version of jihad, or shoot people at a Planned Parenthood center in Colorado, or settle scores in Chicago, or slaughter children at a school in Connecticut.

The guns are still with us, and so are the beasts.

It should be pointed out that one of the reasons why Congress passed the Fourteenth Amendment, was concern over the draconian gun control measures in the Southern states that disarmed the newly-freed slaves. Thaddeus Stevens noted, "Disarm a community and you rob them of the means of defending life. Take away their weapons of defense and you take away the inalienable right of defending liberty...The Fourteenth Amendment, now so happily adopted, settles the whole question."

So essentially, Dickey, who went out of his way to put quotations marks around "rights" in reference to gun rights, is taking the same position as the segregationist Southerners, who saw no problem in violating the Constitution to disarm individuals.