On Saturday's AM Joy on MSNBC, during a discussion of the defeat of right-wing politician Geert Wilders's political party in the Netherlands, MSNBC analyst Christopher Dickey derided Donald Trump as a "right-wing extremist" and "lunatic" who is "nuts" as he theorized that Europeans are rejecting such politicians because of the U.S. President.

And recurring MSNBC guest and Washington Post columnist Jennifer Rubin declared that GOP ideology under Trump is "abhorrent" as she declared that "I don't consider myself a Republican any longer."

At 10:37 a.m. ET, after recalling Wilders's electoral defeat in the Netherlands, Dickey -- who is also an editor for the Daily Beast -- derided Trump as he opined on why Wilders lost:

And part of the reason is, not only is he extreme, but he's so closely identified with Donald Trump that I think that people look at Trump in Europe and say, "This guy's nuts running the United States. The last thing we want is a lunatic like that running our country."

After host Joy Reid asked a follow up question wondering how much impact Trump's election as President is having had on European voters, Dickey continued:

I think, when he was elected, I think the first reaction on the far right and among a lot of people was, "Okay, it's all right to elect a right-wing extremist to run a country." You know, all of a sudden, we don't have to worry about looking strange if we do that. But that dissolved very quickly -- that emotion -- and as people watched him in operation both as President-elect and now as President -- they say, "Wait a minute, we don't want this anymore."

After predicting that right-wing French politician Marine Le Pen would also be hurt by backlash to Trump, Reid turned to Rubin and suggested there were Trump administration members who were sympathetic to a neo-Nazi-like ideology. Reid began:

Steve Bannon who's been a proponent of moving Breitbart across Europe, of spreading this sort of ideology that he admits comes from his sort of love of this book, Camp of the Saints, this idea of this sort of mongrol horde sweeping over the West, sweeping over Europe, and if you don't literally kill them -- as the book sort of posits -- it has a Latin pope who has to make the decision of whether to just kill all of the people who are trying to come off the boats and take over Europe.

That ideology being on this side of the pond, what does it mean for the Republican party? And does it alarm you, all of these allusions to, you know, Sebastian Gorka maybe being tied to a group that's considered neo-Nazi. Your thoughts? 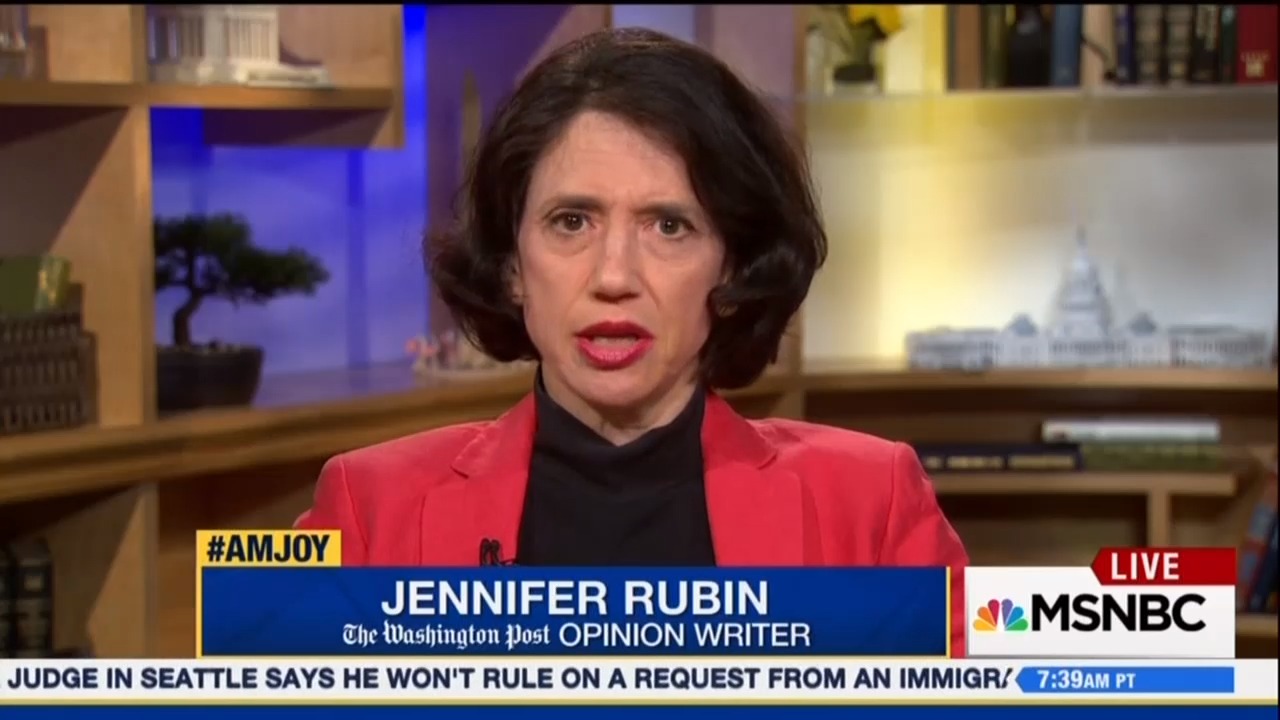 Rubin -- who has recently been a recurring MSNBC guest who has bolstered the network's anti-Republican commentaries -- declared that she is not a Republican any longer as she began:

It's destroyed the Republican party as I knew it. I don't consider myself a Republican any longer. I think it's morally abhorrent. I think it's in practice completely unworkable as we're seeing on a variety of fronts. I have to say, watching the first part of your show, I became depressed all over again watching the budget, watching foreign policy, watching all aspects of this.

It has destroyed the Republican party which was based on a set of principals frankly that abhors discrimination, that takes the Declaration seriously: "All men are created equal. All men are endowed with certain rights." Donald Trump and his sidekicks do not believe this. They have turned into this ethno tribalism. It's contrary to American expressions of history of law from its founding. And I think it's going to backfire domestically on the Republican party. And I think overseas, our correspondent is right. I think there is going to be a reaction. They don't want to be identified with him.

The Washington Post columnist then called Trump a "buffoon" as she concluded:

He's a buffoon. He's insulting our British allies. He's insulting our German allies. Angela Merkel -- who has an election later this year -- you could see she wasn't too pleased at the press conference yesterday. I think there's going to be reaction against him with their far-right party in Germany as well.