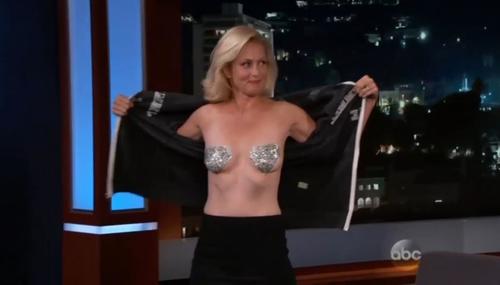 Jeffrey Meyer
August 27th, 2015 11:43 AM
During an appearance on ABC’s Jimmy Kimmel Live on Wednesday night, Ali Wentworth, wife of Good Morning America anchor George Stephanopoulos, flashed her breasts to the late night host and his audience. Wentworth said she decided to flash the audience after she saw Miley Cyrus do the same in the previous segment. Stephanopoulos’ wife described how she and Cyrus “just bumped into each other” and… 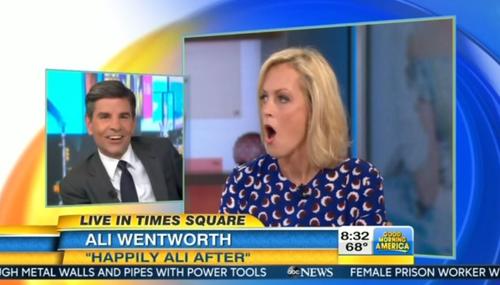 Scott Whitlock
June 8th, 2015 12:26 PM
Less than a month after being forced to apologize for a conflict of interest, George Stephanopoulos's Good Morning America on Monday devoted almost seven minutes of air-time to aggressively promoting the new book from the journalist's wife. Co-host Robin Roberts interviewed Ali Wentworth for six minutes and 39 seconds. In contrast, the latest details on the massive hack from the Chinese… 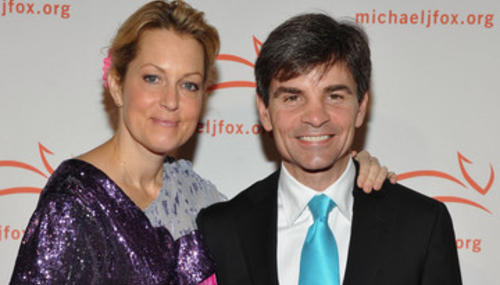 Jeffrey Meyer
May 21st, 2015 2:48 PM
In the wake of the ongoing controversy surrounding ABC News’ George Stephanopoulos and his failure to disclose $75,000 worth of donations to the Clinton Foundation, and now news of his $105-million contract with the network, Politico decided to tout the “frugal habits of his wife,” actress Ali Wentworth.

George Stephanopoulos's Wife On CNN: 'Is Monogamy Killing Your Marriag

Noel Sheppard
August 5th, 2010 6:47 PM
"Tonight - is monogamy killing marriage? If you let your spouse stray, will they stay? Rethinking wedded bliss in the 21st century."Believe it or not, that's how "Larry King Live" began on CNN Tuesday.Filling in for King was Ali Wentworth, comedienne, actress, and wife of ABC's George Stephanopoulos who in February did a striptease on the set of "Good Morning America" for her husband's 49th…

Behar: Bush Admin ‘Did Not Give a Damn About Poor People and Everybo

Brad Wilmouth
July 23rd, 2010 3:50 AM
On Thursday’s The View on ABC, as the group hosted former USDA official Shirley Sherrod to talk about her experience of being fired by the Obama administration, after co-host Elisabeth Hasselbeck got her to address comments she had made before the NAACP in which she accused Republicans of challenging President Obama on health care reform because he is black, co-host Joy Behar went on a tirade…

Brad Wilmouth
December 25th, 2009 3:49 PM
On Wednesday’s Good Morning America on ABC, after she talked about her latest film, It’s Complicated, actress Ali Wentworth subjected husband and new GMA anchor George Stephanopoulos to some jabs as she and co-anchor Robin Roberts spent a few minutes talking about him. Wentworth joked that as they were about to meet for the first time for a blind date, "I knew who he was and wasn’t interested…

Oprah Show Glows for Obama: 'The Light of the New Age Is Here

Tim Graham
January 24th, 2009 11:07 AM
Wednesday’s post-inaugural edition of The Oprah Winfrey Show, taped at a Washington restaurant, overflowed with strange and messianic notions about Obama and how the thrill over him is unanimous. Actor Forest Whitaker summed it up for Oprah: "The light of the New Age is here." Oprah pal Gayle King passed along her agreement with a message that "Not only does he hear us. He feels us. That when I…