Howard Wolfson has become the latest prominent Democrat to join forces with Fox News Channel during the general election, hailing it for its "comprehensive and fair and evenhanded" coverage during the primaries.

That's quite an endorsement coming from one of the Democratic party's biggest communications mavens, and not one known for being especially soft-gloved. It's the equivalent of MSNBC suddenly getting endorsed by the likes of Mary Matalin or Ari Fleischer, something which is far less likely to happen. New York Times reporter Jim Rutenberg broke the story:

Howard Wolfson, who was a top strategist for the presidential campaign of Senator Hillary Rodham Clinton, is going where some Democrats were unwilling to go during the early days of the election season: the Fox News Channel. [...]

Mr. Wolfson is joining a network that Democrats shunned for a time, complaining that its coverage was unfair. But aides to Mrs. Clinton came to view Fox News as distinctly fair to her in a news media climate that they believed favored Senator Barack Obama.

Ex-Journalist Linda Douglass: I 'Always' Had Problems With McCain

Ex-journalist Linda Douglass, now a spokesman for Barack Obama, admitted in a piece in Monday's Washington Post that she "always" had "fundamental differences" with Republican presidential candidate John McCain. The former reporter, whose long history of liberal bias has been chronicled by NewsBusters, also announced to the Post's Howard Kurtz that she believes "reporters are constantly struggling with themselves to suppress their own opinions," but Douglass personally finds working for Obama to be "really liberating."

The former correspondent for both CBS and ABC denied claims of media bias by oddly citing other journalists as proof she was objective: "It was no secret to the reporters around me that I have Democratic-leaning views. But they said I was always fair." Despite the vouching of other reporters, it should be pointed out that this is the same person who insisted on calling liberal Senator Jim Jeffords a "moderate," knocked President Bush for not being inclusive and opined that although (then) Congressman Bob Dornan was "extreme," he fit in well with the "increasingly conservative Republican Party:"

Ex-Journalist Linda Douglass Returns to ABC to Shill for Obama

Former journalist Linda Douglass returned to ABC and appeared on "Good Morning America" Wednesday in her new role as a strategist and spokesperson for Barack Obama. Expressing no surprise or conflict that a longtime reporter would segue from recounting the news to representing a Democratic presidential candidate, GMA news anchor Chris Cuomo breezily introduced, "We're going to begin with someone representing Obama, whom we know very well here at ABC News. Linda Douglass, a former, respected journalist, a longtime ABC News family member. But now Linda is an Obama campaign strategist and spokesperson."

Wednesday's GMA featured a gaggle of journalists turned Democrats, Democrats who became journalists and also those with famous liberal families. Cuomo is the son of a former Democratic governor of New York and the brother of the current Democratic Attorney General from that state. And his segment with Douglass followed one with "This Week" host George Stephanopoulos, a former top aide to Bill Clinton. Cuomo, provided some Democratic spin of his own when he asserted that Senator John McCain, by giving a tough speech on Tuesday, did not revel in Obama's history-making moment. In a tease early in the show, he lamented, "But on the Republican side, the nominee John McCain was all business. He was not basking in history last night." While interviewing Douglass, he reiterated, "On a night that was history-making for Obama, McCain did not dwell on history."

It's sort of like Linda Douglass but on the local level, I guess. I'll have to ask our Seattle-area readers to note in the comments section if KING's Robert Mak repeatedly displayed a penchant for gauzy coverage of liberal Mayor Greg Nickels (D).

The 10-time local Emmy-winning reporter is leaving TV news for a job that pays $10,000 more a year than his new boss.

From the Seattle Times (emphasis mine):

Mak, known to many viewers as host of the public-affairs program "KING 5 News Up Front," said he wasn't looking for another job when Nickels' office approached him a few weeks ago.

'I Hate to Keep Being in the Position of Defending Obama, But...'

Weeks before Linda Douglass announced she would be jumping aboard the Barack Obama presidential campaign as a senior strategist, the former CBS News and ABC News Washington correspondent was already aiding the Obama campaign. Back on the May 4 Reliable Sources on CNN, for instance, she became defensive: “I hate to keep being in the position of defending Barack Obama...” Yet that's exactly what she did on a panel with Amy Holmes and Joan Walsh. On that Sunday, the weekend after Obama held a press conference to denounce Jeremiah Wright, she pronounced media attention on Wright to have “been too much” and contended: “To make your judgments about how to cast a vote for President based upon the statements of this pastor seems to be a bridge too far.”

After host Howard Kurtz played a clip of Bill Moyers complaining that “white preachers are given leeway in politics that others aren't,” Douglass agreed: “That is actually a point that we should be discussing,” as she contended “Republican candidates have routinely associated themselves with white pastors who have made similarly incendiary statements.” As to attention to how Obama does not (at that time) wear a flag pin, a flustered Douglass countered:

As noted earlier by Brad Wilmouth, Marc Ambinder revealed today, on his blog for The Atlantic, that his colleague at National Journal, Linda Douglass, a long-time CBS News and then ABC News Washington bureau reporter until 2006, “will join Barack Obama's presidential campaign as a senior strategist and as a senior campaign spokesperson on the roadshow, a newly created position.” Ambinder, a colleague at National Journal, reported:

Douglass confirmed her new position when I walked up to the ninth floor, knocked on her door, and asked her about it. She informed National Journal President Suzanne Clark this morning of her impending departure. "I see this as a moment of transformational change in the country and I have spent my lifetime sitting on the sidelines watching people attempt to make change. I just decided that I can't sit on the sidelines anymore."

“Over 34 years in journalism,” Douglass told Ambinder, “she grew disillusioned with the partisanship she saw first-hand.” So, now she's joining a partisan campaign? 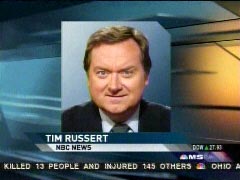 The Time 100 list of the most influential people is out, and MSNBC on Friday afternoon was touting its own designated power broker, NBC Washington Bureau Chief and Meet the Press host Tim Russert. There’s only one problem. The gooey profile is written by former New York Gov. Mario Cuomo. 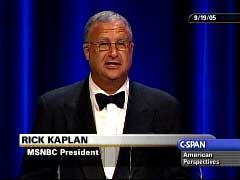 Essay: So Much More Than Just the New York Times

Standard-free journalism on parade all day on NBC's Sunday

It was another do-as-we-say, not-as-we-do day for the National Broadcast Company this past Sabbath.

Over the weekend NBC offered up their latest versions of Tim Russert's Meet the Press and the Chris Matthews Show -- the latter being political television's answer to Jerry Springer. In them we were treated to two more glittering examples of all that is wrong with the Jurassic Press.

That being the woeful lack of journalistic ethics demonstrated by those at the heights of the media mountain, and the utter shamelessness they and their colleagues exhibit upon their being outed as amoral hacks.

Koppel, the daughter of Ted Koppel, served as an international correspondent for CNN, then covered the State Department before spending her last months at CNN covering Capitol Hill. She proclaimed in the firm's press release that she wants to fight for “the voiceless in our society” as she embraced the “impressive roster of clients” and promised to help them “achieve their goals.”

And you thought only the New York Times was engaged in not-for-profit journalism.

Behold the Center for Public Integrity (CPI), who on Wednesday made headlines across the nation with their report -- co-authored with the Fund for Independence in Journalism (FIJ) -- entitled "Iraq - The War Card: Orchestrated Deception on the Path to War".

The Establishment Media hailed the study's lead "finding" -- 935 false statements by Bush Administration officials in the two-year period leading up to the launch of the War. The Associated Press, CNN, MSNBC, the Washington Post and -- of course -- the New York Times were all exhilarated to once again climb aboard the "Bush Lied - People Died" Express.

Journalist Moving from Paper to ACLU: A 'Continuation of Her Work'

This isn't The Onion; it's for real (HT Hot Air; bold after title is mine):

Terri Burke, former editor of the Abilene Reporter-News, has been named executive director of the American Civil Liberties Union of Texas.

Burke, 56, will begin work at the ACLU of Texas on Tuesday. Her duties will include lobbying, fundraising, administering the organization and communicating with the public.

Burke said her new job seems like a continuation of her work in the newspaper business.

"I wanted to be a journalist because I thought journalism was a way to further the democratic process," Burke said. "At its heart, journalism is about the First Amendment. All my life, I've been interested in those kinds of issues."

I will suggest that no one in Old Media will think of Burke's move as the least bit odd.

Funny, that's not how they saw it in 1998 when the late David Brinkley retired and became a spokesman for a large corporation.