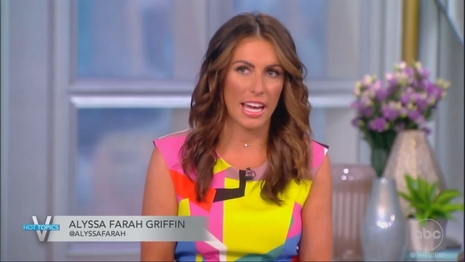 The rumors appear to be true that The View’s months-long search for a conservative to replace Meghan McCain is ending with the selection of faux conservative Republican Alyssa Farah Griffin. That’s according to the U.K.-based Daily Mail which reported on Tuesday that “ABC will announce her new position imminently.” They also have some purported outrage from inside the network that’s pretty hilarious.

“Farah Griffin, 33, will be named as Meghan McCain's full time [sic] replacement on the panel from September for the show's 26th season,” wrote senior reporter Claudia Aoraha. “Three insiders with knowledge of the discussions with Farah Griffin have told DailyMail.com that ABC will announce her new position imminently.”

The article also included quotes from those insiders critical of the pick and hilariously calling out Farah Griffin for the opportunistic operative that she is:

One source close to the discussions with her said: ‘My jaw dropped when I was told that she was the pick. It makes no sense.

'Part of me wishes they just leaned into MAGA and hired Kimberly Guilfoyle, at least it would better reflect part of the audience and there would be fireworks every day.’

Another insider told DailyMail.com: ‘Her soon to be [sic] co-hosts are very upset. They feel she isn’t authentic and changes her opinions based on who her paymaster is.

‘Ana Navarro especially feels let down as they are hiring someone who was an essential part of the movement that destabilized this country.

A source also found her family “problematic” because “her father Joseph founded WorldNetDaily a website that promotes conspiracy theories” and called it “terrifying.”

It’s obvious that Farah Griffin’s views and allegiances change based on who is lining her pockets. As NewsBusters reported in June, she was eager to learn which Democrat her future co-workers supported so she could push them too: “I’m curious. Like who are the Dems going to run? Where is like the Obama energy that we could bring?”

And she even walked back comments pointing out the apparent red wave coming in the November midterm elections when pressed by Whoopi Goldberg, who seemed to suggest she was trying to suppress Democratic voter turnout.

The behind-the-scenes animosity against Farah Griffin, as noted by The Daily Mail, has even spilled over onto air. “These people who are now all, like, recovering addicts – recovering addicts in the Trump world that come on, even on this show. They come on this show, they go on other shows and they're turning on Trump,” decried Joy Behar in June.

The 26th season of The View begins in September, so the announcement might come before the end of the current season.