By John Galt | December 7, 2005 12:22 AM EST
Recently I wrote about Law & Order's not-so-subtle agenda on the immigration issue. Now cometh ABC's Boston Legal, a show known for both entertaining and pushing the envelope. Let's start with a portion of the show synopsis on the ABC website:

LA Times columnist Joel Stein writes a column called Oy to the World where he ultimately says that he thinks there isn’t a war on Christmas . I find this ironic and also insulting as a Christian because all throughout his commentary he disparages Christians and what we believe.

New ABC "World News Tonight" anchor Elizabeth Vargas has long been a team player on the liberal-bias teams at ABC and NBC. One of her most unforgettable stints -- displaying ABC's cultural bias, not political bias -- was a one-hour special highlighting the "legends" behind the novel "The DaVinci Code," and novelist Dan Brown's claims that in our nonfiction world, the Catholic Church has tried to strangle the "truth" that Jesus Christ had sex with Mary Magdalene and she took their son to France after the Crucifixion.

Ken Shepherd alerted me to a story ABC's Dan Harris did on "World News Tonight" on evangelical Christian sensation Rick Warren ("The Purpose-Driven Life") and his new passion for an AIDS ministry. This Harris sentence really stuck out: "He's urging them to start serving people with HIV/AIDS — a disease that many evangelicals have either long ignored or called God's punishment of gays."

Misunderstanding Faith Through a Political Prism

George Korda, a columnist for the Knoxville News Sentinel, today memorializes former Southern Baptist Convention president Adrian Rogers, who passed away Nov. 15. Rogers helped to achieve a "Conservative Resurgence" in the denomination in the 1980s, but Korda says the MSM portrayed his life work in political terms rather than as one committed to his faith:

Hot NPR Commentary: "All Obscenity Is Less Insulting" Than Belief in God

Hot right now on the NPR website: Penn Jillette (the tall, loud half of Penn & Teller) expounding his atheism as part of "This I Believe" series on "Morning Edition." This is the hot paragraph:

In Newsweek: "You Have to Be Insane" To Disagree With Lennon "Peace" Anthems?

The 25th anniversary of John Lennon’s death in New York drew a big article in Newsweek by Jeff Giles, filled with all the normal liberal genuflections: "the man who wrote ‘Imagine,’ ‘Give Peace a Chance’ and ‘All You Need Is Love,’ which amount to the greatest ad campaign for brother- and sisterhood in history." In between that and Sinead O’Connor’s scary metaphors for Lennon ("He was my breast milk, you know?") was a series of rock star tributes to their favorite song 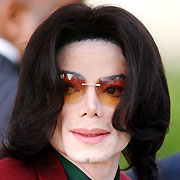 ABC’s “Good Morning America” on Tuesday broke a story about Michael Jackson that has received surprisingly little press. In a report about the pop star’s finances, as well as his relationship with financial advisors, an audiotape was played of a telephone message Jackson left for a former business associate:

Can AP Tell the Whole Truth?

The Associated Press is at it again. In its continuing crusade against the Catholic Church, Richard Ostling has come up with a piece titled, “Catholics Disagree Over New Vatican Decree,” in which he attempts to use priests to chastise the church for the Vatican’s decree forbidding gay men to enter seminaries. A few samples:

WashPost's Dana Milbank Even Gets Snarky With Popes

Dana Milbank's snarky "Washington Sketch" column in the Washington Post Tuesday employs a bad, even mildly offensive, analogy in comparing Bush and Cheney to the last two Popes: "As vice president, Cheney has always played the hard-line Cardinal Ratzinger to Bush's sunny John Paul II. Before the war, Cheney asserted that Iraq had 'reconstituted nuclear weapons.' Since the invasion, he has gone further than others in the administration in asserting Iraq's ties to the Sept.

Left-wing media bias certainly isn't a problem restricted only to the United States. According to the London Guardian, one of France's top TV bosses admitted earlier this month that his network deliberately refrained from showing burning cars in its coverage of France's domestic rioting for fear that doing so would help "right-wing" political parties.

One of France's leading TV news executives has admitted censoring his coverage of the riots in the country for fear of encouraging support for far-right politicians.

Jean-Claude Dassier, the director general of the rolling news service LCI, said the prominence given to the rioters on international news networks had been "excessive" and could even be fanning the flames of the violence. [...]

"Politics in France is heading to the right and I don't want rightwing politicians back in second, or even first place because we showed burning cars on television," Mr Dassier told an audience of broadcasters at the News Xchange conference in Amsterdam today.