After falsely claiming that oil companies pay no federal royalties for offshore drilling, an assertion later undermined by one of her own guests, Rachel Maddow rewrites the history of the oil industry's last 40 years.

"We've had a lot of response to the NBC News archival footage that we played this week showing just how much hasn't changed in the past 30 years of oil drilling disasters," told her MSNBC viewers May 28. "You may recall that we played news coverage this week of the 1979 Ixtoc oil well blowout in the Gulf of Mexico. And that footage made clear that from failed blowout preventers, to junk shots, to top kills, to booms, to dispersants, to undersea plumes of oil, oil disasters and oil disaster response looks the same now as it did 30 years ago."

"The only real technological progress the oil industry has made in the past 30 years is figuring out how to drill in ever deeper water," Maddow claimed. "It was unsafe in 200 feet of water 30 years ago. Now the progress is that today it's unsafe in 5,000 feet of water. ... No one in the oil industry wants to say it and no one in America wants to believe that it is true and I include myself in this. But honestly, we have no idea how to drill safely offshore. We know how to drill offshore, but we do not know how to drill safely offshore. Because the oil companies have never been made to care too much about that before."

Not only that, I would hasten to add, we have "no idea" how to send human beings safely into space. Even after losing three astronauts in the Apollo 1 fire of January 1967, seven more perished nearly 20 years later on the shuttle Challenger, followed by another seven fatalities on the Columbia in 2003. 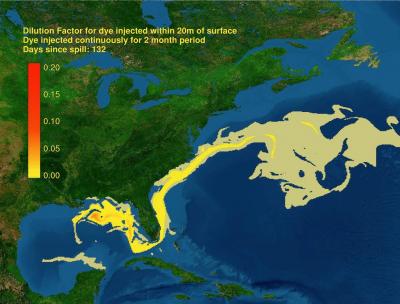 The National Center for Atmospheric Research believes that oil from the leaking deep water rig in the Gulf of Mexico could impact much of America's East Coast by summer.

As reported by the University Corporation for Atmospheric Research Thursday, scientists using a detailed computer modeling program have created a video image of what they feel is possible in the coming months.

"'I've had a lot of people ask me, ‘Will the oil reach Florida?'" says NCAR scientist Synte Peacock, who worked on the study. 'Actually, our best knowledge says the scope of this environmental disaster is likely to reach far beyond Florida, with impacts that have yet to be understood'" (video follows with more of this report and commentary):

MSNBC's Morning Joe on Thursday touted Barack Obama's handling of the BP oil spill and enthused, "I think they're doing better now, right? I think the past couple days have been great." It was left to Time magazine's Mark Halperin to offer the non-White House spin. He deadpanned, "Except the hole's not plugged." [Audio available here.]

Reversing the usual positions of a conservative and a member of the mainstream media, Halperin derided, "As long as the President's doing important things like going to rock concerts, I think everybody will understand." A defensive Scarborough shot back, "Nah, that's a cheap shot."

The Morning Joe host, supposedly the voice of conservatism on MSNBC, proclaimed, "...Nobody, when they go to the polls this fall, voting for a Democratic or Republican candidate, are [sic] going to blame Barack Obama and Democrats for not plugging a hole, I don't think."

British Petroleum's (BP) reputation has been marred by the April oil rig explosion and subsequent oil spill which is still gushing more than 40 days later. But according to The Washington Post, the reputation of some left-wing environmental groups has also been polluted by the incident.

"[T]he Nature Conservancy lists BP as one of its business partners. The Conservancy also has given BP a seat on its International Leadership Council and has accepted nearly $10 million in cash and land contributions from BP and affiliated corporations over the years," Joe Stephens wrote for the Post May 24.

It's not just Nature Conservancy either, the Post found $2 million in donations to Conservation International and relationships between BP and other lefty activist groups Environmental Defense Fund (EDF), Sierra Club and Audubon.

"The crude emanating from BP's well threatens to befoul a number of alliances between energy conglomerates and environmental nonprofits. At least one group, Conservation International, acknowledges that it is reassessing its ties to the oil company, with an eye toward protecting its reputation," the Post said.

This was front page news at The Post on May 24, but received only silence from other mainstream media outlets including the three broadcast networks.

CNN's Griffin to Reich on Idea to Seize BP: 'Illegal;' 'Smacks of Venezuela'

By Matthew Balan | June 2, 2010 7:45 PM EDT
On Wednesday's Rick's List, CNN's Drew Griffin pressed former Clinton administration official Robert Reich on his call for a federal takeover of BP and its efforts against the Gulf oil leak. Griffin first questioned Reich if his proposal was serious, and later stated that the Democrat's idea "sounds not only highly illegal...but seems to me to smack of something that we might see in Venezuela" [audio clips available here].

The CNN personality, who was filling in for anchor Rick Sanchez, brought on the current University of California, Berkeley professor to discuss his proposal, which he first made in a May 31 column (as noted by Jeff Poor at MRC's Business and Media Institute). After summarizing Reich's position, that it was "time for the government to seize control of BP and take over the company's oil spill recovery efforts in the Gulf," Griffin bluntly asked the former labor secretary, "I've got to tell you, I have always considered you a very serious person, but this doesn't sound serious to me at all. Are you serious about this, or was this some kind of a joke to get things going?"

Scarborough was irate at the “hypocrisy” of the statement because during his time in New Orleans in the middle of Katrina, he recalled, “a lot of people keeping their mouths shut because they didn't want to criticize President Bush.” [MP3 audio available here; WMV video for download here]

This outburst was in response to Karl Rove’s statement on Fox News that, “The president and his people are in charge of this under the Oil Spill Liability Act and they don’t have a plan.” Scarborough then hastily asserted, “Just keep your mouth shut. I'm not saying don't criticize the president, but if you were involved in Katrina, keep your mouth shut.”

Of course, during a post-Katrina interview with “NBC Nightly News” anchor Brian Williams, Scarborough felt no compulsion to keep his mouth shut in deference to the president. At the time, Scarborough asked if Williams found it an "ironic choice" to report “from a major American city where young children died of dehydration out on sidewalks, and now you've got the President of the United States delivering a speech to the nation from Jackson Square, an area largely untouched by Katrina's devastation.”

It was bound to happen and no one can really blame them for doing so, but someone eventually had to determine who the political winners and losers are for the tragic circumstances surrounding the BP Gulf of Mexico oil spill.

Looking forward to the upcoming election cycle, MSNBC "Morning Joe" host Joe Scarborough determined the time was right to take a stab at it, although reluctantly on his June 2 broadcast.

"[W]e will stay with BP for one second but talk about presidential politics and I know this will be offensive to some people but it's just a reality that there is somebody in the White House, somebody in the Democratic Party, somebody in the Republican Party that's trying to figure out the political impact of this environmental tragedy. And we were talking with Chuck Todd last hour about how it ramps up when the oil starts washing on Florida shores, Chris. That makes this a much bigger political event in terms of presidential politics, like it or not."

The mainstream media is of course replete with liberal opinionistas who criticize Republicans far more harshly than Democrats. That is nothing new. It is truly shocking, however, when supposedly "objective" news outlets employ even more egregious double standards than the openly-biased commentators.

The Wall Street Journal's James Taranto caught the Associated Press employing one such double standard over the weekend. The AP's Ben Feller penned quite a sob story about the president's response to the Gulf spill, saying that Obama is "having to work through unforeseen problems" and made sure to note that his "ability to calmly handle many competing issues simultaneously is viewed as one of his strengths."

A contrast with the AP's rheotroic on the Bush administration's response to Hurricane Katrina reveals quite a discrepany in the organization's views on the executive's accountability for natural disasters. That New York Times columnist Frank Rich and uber-liberal mudslinger Bill Maher have both had harsher words for the current president and his response to the Gulf spill speaks volumes.

“I really believe that this what is happening in the Gulf is a classic [example] of how we do need campaign finance reform,” implored Schultz. “It’s all interconnected.”

“One of the things you talk about a lot on your show and write about in the book is the relationship between money and politics,” declared Geist. “So what you have essentially, you could say, is a form of legalized bribery. I contribute to you, Senator Schultz, and you carry out my interests in Washington. What do we do to change that? We all know that’s the problem. We all know people are acting on behalf of corporations and not people.”

By NB Staff | June 1, 2010 1:15 PM EDT
"It took about three days" after Katrina's landfall in New Orleans for the media to attack the Bush administration for acting &qu

With the Gulf Coast oil spill appearing to spin out of control, the Obama-loving media are now working overtime to shelter the President from any possible blame.

Almost incomprehensibly, "Obama's Katrina? Maybe Worse" is more of hit piece on the Bush administration than a serious analysis of the failings of the current White House to do anything to prevent the environmental disaster slamming the Gulf Coast after that oil well exploded almost six weeks ago. 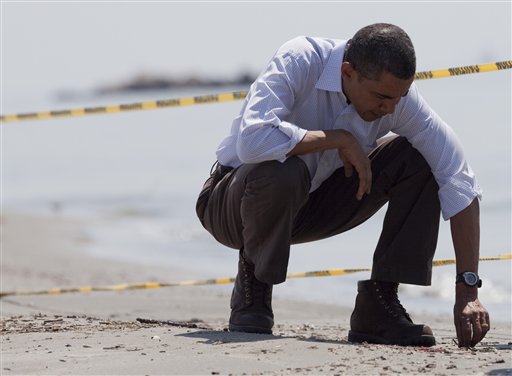 On Saturday, the Associated Press informed its readers that President Obama cannot be expected to focus all of his attention on the Gulf Coast oil spill.

The reason? Presidents have to juggle a number of pressing issues at a time, and what with America being in a recession, Obama simply can't afford to give sole focus to this disaster.

Too bad the AP wasn't so understanding in 2005 when President Bush was perceived as being detached from the suffering in New Orleans after Hurricane Katrina. Back then, the wire service was quick to mention vacation plans and peddle accusations of the federal government not caring about the poor.

But what a difference with a Democrat in the White House: as BP's efforts to plug the leak continue to fail, there is increasing danger of Americans putting partial blame on an ineffective government - and we just can't have that.

The AP's Ben Feller helpfully published a reminder that there's more going on in the world than oil pumping into the water in the Gulf: