Scarborough: On Voting Rights, GOP Like Wallace 'In Schoolhouse Door'

Joe Scarborough has a bad habit of riding verbal hobbyhorses into the ground. As we've often documented, as here and here, once Joe gets what he thinks is a catchy phrase into his noggin, he repeats it—ad nauseum. This morning, Scarborough's hobby horse o' the day was "schoolhouse door," with an explicit reference to George Wallace, who infamously blocked desegregation in such manner.… 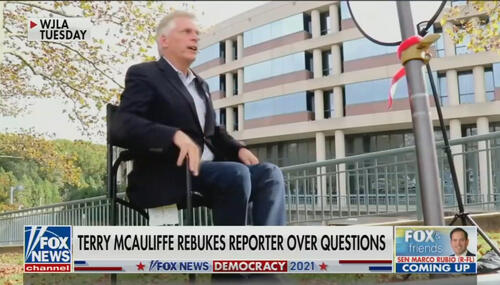 On Tuesday, FoxNews.com’s Joseph Wulfsohn reported on Virginia Democratic gubernatorial candidate Terry McAuliffe storming off in the middle of an interview with a local reporter and telling the journalist: “You should’ve asked better questions.” The sit-down exchange was set to last 20 minutes, but the frustrated Democrat abruptly ended the interview after only 10 minutes.

As news broke Monday morning of the passing of former Secretary of State and Joint Chiefs Chairman Colin Powell, on NBC’s Today show, correspondent Andrea Mitchell jumped at the chance to exploit his death to bash Republicans. However, in her ghoulish rush to do so, she got her facts wrong when she falsely claimed he was “booed” at the 2000 GOP National Convention.

Washington -- Several years ago, while perusing material for my favorite department of “The American Spectator,” the Current Wisdom, I came across an obvious lie perpetrated by Terry McAuliffe, this season's Democratic candidate for governor of Virginia. It was a pretty bold lie, too, and he was quite proud of it as you will see. The Current Wisdom is a department of “The American Spectator”…

MSNBC’s The ReidOut host Joy Reid has built a career on rhetoric full of incitement and truly hideous rhetoric against tens of millions of conservatives and Republicans or anyone who dares to stray from her worldview, so it was no surprise on Tuesday when she warned that, unless they’re put down, “[w]e may be in the waning years of America as a democracy” as the “Jonestown”-like right…

A day after promoting a party-switching former Republican who is running for Oklahoma as a Democrat, on Tuesday, CNN's New Day devoted a segment to a pair of disaffected Republicans who are encouraging members of their party to vote Democratic and keep Democrats in control of Congress.