CNN’s senior political correspondent Candy Crowley, during a report on Thursday’s "The Situation Room," must have thought it was a foregone conclusion that Barack Obama would give up on his pledge that he would accept public financing for his presidential campaign. "If you raised more than a quarter billion dollars in the primary season, would you limit yourself to $85 million in the fall campaign? Duh!" While she did point out Obama’s previous statements affirming his dedication to public financing, both she and Wolf Blitzer used subdued language to describe this broken promise, and tried to spin how this might be a potential issue in the campaign.

Olbermann: 'Awol' McCain 'Supporting Himself Instead of the Troops' 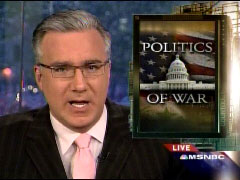 On Thursday's Countdown show, MSNBC host Keith Olbermann seemed to mock John McCain's military service as he quipped that McCain was "awol" for not showing up for a Senate vote on providing college tuition to American troops, and further accused McCain, whom he called "Senator 'I Support the Troops,'" of "supporting himself instead of the troops." The MSNBC host also mocked McCain as being at the "front lines" of a fund-rais

US News’s Zuckerman: I Don't Give to Politicians; Records Show He Has a Dozen Times

It's not unusual for journalists to attempt to distance themselves from the appearance of political ties, especially when trying not to be perceived as biased. But saying you do and actually doing are two separate things.

"I wish I could make a contribution, but I'm in the world of journalism and I can't, but thank you for the offer," Zuckerman said.

..... and waits until the 30th paragraph of its online story to reveal it.

The feds seem to be closing in on Illinois Governor Rod Blagojevich -- and at least one Chicago television station seems determined to minimize exposure not only of his party affiliation, but of others who have received tainted campaign contributions.

CHICAGO (CBS) ― In an explosive development reaching to the state's highest office, a former high-ranking state official claimed Tuesday that Gov. Rod Blagojevich was on hand when he presented $25,000 in campaign money to now-indicted fundraiser Antoin "Tony" Rezko.

Ali Ata, 56, a former executive director of the Illinois Finance Authority, said Blagojevich then asked Rezko if he had talked to Ata about a job on the state payroll.

Ata said later, after he made a second $25,000 campaign contribution, Blagojevich again brought up the subject of a job and said it should be one in which Ata "could make some money."

Time magazine is using the fact that the Democrat presidential candidates are currently being forced to raise more money to battle each other as evidence that the Democrats are much better at online campaign fundraising than the Republicans.

Hillary Has Raised Only 5% of Pa. TV Airtime Goal

As a loyal Clinton campaign email subscriber, rarely a day goes by that I don't hear from Hillary or Bill. It's good to know they're thinking about me. But today brings some very troubling news: Hillary is WAY behind on her fundraising goal for TV airtime in Pennsylvania. [screencap below page break]

The gist of today's message from Hillary is that we supporters are being given a cafeteria list of PA campaign expenditure needs, and get to designate exactly where we want our contribution to go.

I had been torn between door hangers and yard signs, when I decided to check out some of the other options, and . . . YIKES! As you'll see from the image, the budget for TV airtime in Pennsylvania is $2.5 million, but Hillary has raised only $129,947. That works out to only 5.1% of the goal!

The title to this article is exactly how I'd write it if I were a political hack trying to drum up a faux controversy for use by other political hacks in the mainstream media. Which is exactly what Sam Stein of the Huffington Post did on February 12th as he broke out the yellowkid journalistic mold for a fantasy leftist hack attack on John McCain headlined in giant font, McCain Received $100,000 From Firm Of Abramoff Notoriety.

Before I comment further on the idiocy of Stein's assertions it is only fair that I mention that there is nothing in his article that isn't true just as there isn't anything untrue in mine here. Barack Obama did in fact receive over $80,000 from the same firm that Stein tries to hang John McCain with. In addition both John McCain and Barack Obama were eclipsed by the $162,450 amount received by Hillary Clinton from employees of the same jaded firm.

As media digest the recent John McCain sex scandal allegations by the New York Times, one side of the story seems destined to get ignored: one of the four co-authors took money from a liberal activist group to fund a hit piece about Sen. Mitch McConnell (R-Kent.) in 2006.

Before becoming an investigative reporter for the Times, Pulitzer Prize winner Marilyn W. Thompson was editor of the Lexington Herald-Leader in Kentucky.

As Howard Kurtz reported in October 2006, Thompson was in the middle of what one might call a pay for play hit piece against that state's leading Republican figure (emphasis added):

The New York Times's John McCain "bombshell" story, hinted at since December, was unloaded on Thursday's front-page -- and promptly fizzled out among conservatives and liberals alike, who dismissed the story from a four-person team as a strained mix of sex innuendo and old news (The Keating Five?).

It's no wonder if you take a look. This story is all hype and no substance:

File under Law of Unintended Consequences . . .

There has been significant speculation in the MSM that an upshot of the NYT's McCain piece could be to rally support for McCain from conservatives like Rush Limbaugh who heretofore have been, shall we say, less than enthusiastic about the Arizona senator.

Typical was this exchange from today's Good Morning America, which followed an appearance by McCain campaign advisor Charlie Black.

I was offered the privilege on Friday of introducing Congressman Mike Pence of Indiana at CPAC, who gave a nice, staunch speech about conservatism and urged John McCain to "embrace the Right and the Right will embrace you." In my introduction, I noted that Brent Bozell said it used to seem like many Republicans on the Hill were conservative leaders when Reagan was president, since they were carrying out Reagan's work. But now, when Republicans are back in the minority and conservatives are discouraged, there might be five people you can identify as conservative leaders on the Hill. You might debate the other four, but nearly everyone nods their head at the mention of Mike Pence. You can see the Pence video at TownHall.

On one of our issues in Medialand -- the reimposition of a "Fairness Doctrine" to clamp down on conservative talk radio -- Pence has been a stalwart. He received several standing ovations, including these lines on freedom of speech:

In ackowledgment of what he says is the Republican Party's counting on "fear and loathing of Hillary Clinton" to bring together Conservatives and Establishment Republicans behind now presumptive Party nominee John McCain (now that Mitt Romney has suspended his effort), Rush Limbaugh this afternoon announced that he is considering raising coin to assist her in her attempt to win the Democratic nomination over Illinois Senator Barack Obama.