Larry King, best known recently for his scintillating interviews with thinkers such as Paris Hilton, proved that he can still ask tough questions, to conservatives that is. In an interview with Vice President Cheney about Guantanamo, he wondered, "You have to torture them when they’re there?" Former VP Al Gore, on the other hand, received puff questions about Madonna and penguins.

The French Fries of Enduring Love

Speaking of media coddling, "Good Morning America" anchors Diane Sawyer and Robin Roberts appeared to be infatuated with the story that 2008 Democratic candidate John Edwards and his wife Elizabeth spend their wedding anniversaries at Wendy’s. Roberts even promoted the former senator by referring to him as "Presidential nominee" John Edwards. 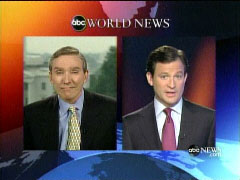 ABC's World News Sunday featured a report about the upcoming meeting between President Bush and recently elected British Prime Minister Gordon Brown, which included speculation about how Bush's relationship with Brown will compare to that with Tony Blair. Between anchor Dan Harris and correspondent John Cochran, the derogatory charge by Blair critics that he was Bush's "poodle" was mentioned three times. 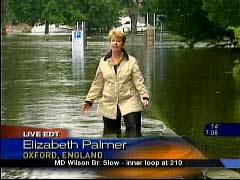 With any weather related disaster, the mainstream media typically blames it on "global warming." This was no exception on the July 26 edition of "The Early Show." Upon reporting on the flooding in Britain, correspondent Elizabeth Palmer concluded her report blaming the disaster on global warming and predicting more to come. 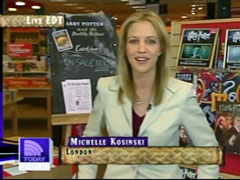 See Update below: Michelle back on the flooding beat!

If Neal Gabler had been around in the late 1930s, would he have been praising Neville Chamberlain's complacency toward Hitler while condemning Churchill and FDR for their "hysteria"? Maybe so, judging by the liberal Fox News Watch panelist's comparison of the reaction of the British and the Americans to terror.

FOX NEWS WATCH PANELIST NEAL GABLER: The [British] coverage was I think very responsible, very even-tempered, very fact-based, very cool, and I'm wondering if this isn't a function of the way the British government responded, which was very even-handed, very temperate, very cool . . . When we get terrorist threats in this country, I mean they are hyped, there's hysteria, and is that a function of the fact that the admistration hypes these things?

'Those Who Cure You Will Kill You'

Contrast that thought with the eerie statement told to Canon Andrew White , a senior British cleric working in Baghdad, by an al-Qaeda leader in Iraq – “Those who cure you will kill you,” according to the Times (U.K.)

The Times said that the eight suspects involved in the recent British terror plots, “are all young, Muslim and connected to the medical profession. But they come from Jordan, Iraq, other Middle Eastern countries and India …”

AP Forgets One Thing Britain's Bombers Had In Common

The AP's David Rising discusses the diverse backgrounds of the British bombers:

Keith Olbermann, the same guy that pooh-poohed the seriousness of the terror plot of the so-called Fort Dix Six, hinted on his "The News Hole" blog last night that he had a similarly dismissive attitude about the London bomb attempts of June 29.

[Olbermann covered the story on his program, but I have not had a chance to review the tape]

Here's the pearl of moonbattery from Olbermann's blog last night (portion in bold my emphasis):

I'm Going with the Gut on London Bombings

By Ken Shepherd | June 29, 2007 6:10 PM EDT
Fox News Channel's late-night host Greg Gutfeld has a blog entry up at Huffington Post (also cross-posted to his DailyGut.com Web site) that mocks the insane moonbattery of leftist blog commenters who can't possibly accept that today's attempted bombings in London were part of a terrorist plot.

Gutfeld has a wicked sense of humor, so I snipped a little excerpt below. You can catch "Red Eye w/Greg Gutfeld" at 2:00 a.m.