Brian Williams Treats Obama as Oracle of Wisdom, Wonders: ‘How Are You Thinking About Your Job These Days?’ 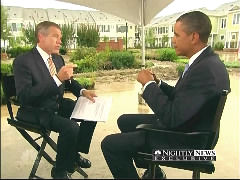 Interviewing President Barack Obama in New Orleans on Sunday afternoon, Brian Williams treated Obama with a level of deference he didn’t afford to President George W. Bush as he treated Obama as a great oracle of wisdom to pluck. “Katrina was about so many things. It was about class and race and government and the environment,” Williams told Obama in the except aired on the NBC Nightly News, yearning for guidance: “Whatever happened to that national conversation we were supposed to have about it?”

Williams raised how “it's getting baked in a little bit in the media that BP was President Obama's Katrina. And it's also getting baked in that the administration was slow off the mark,” but only to cue up Obama: “Is that unfair?” As the economy continues in dire straights and Obama’s economic policy of “stimulus” spending has obviously failed, all Williams could ask was: “Do you have anything new on the economy?”

Williams fretted that though “you're an American-born Christian...significant numbers of Americans in polls, upwards of a fifth of respondents are claiming you are neither.” The “question” from Williams: “This has to be troubling to you. This is, of course, all-new territory for an American President.”

On July 27th and 28th, the New York Times published the following headline: "The oil slick in the Gulf of Mexico appears to be dissolving far more rapidly than anyone expected." In the story that followed the headline, readers were informed: "The immense patches of surface oil that [once] covered thousands of square miles of the gulf after the...oil rig explosion are largely gone."

Ironically, the man who predicted this would be case was the much-maligned Tony Hayward, former Chief Executive of British Petroleum (BP). While being grilled on Capital Hill about the oil spill earlier this year, Hayward described it as a "relatively tiny" one in comparison to the "very big ocean" in which it had occurred.  Although the backlash Hayward faced by Democrats was nasty, Rush Limbaugh concurred with the BP boss, and stories like the one I cited from the New York Times seem to demonstrate that Hayward and Limbaugh were both correct.

Yet, not only does BP continue to be the target of heavy criticism by Democrats and environmental groups, it has even found itself in the crosshairs of Brad Pitt, who recently "said he would consider the death penalty for those to blame for the Gulf oil spill crisis." According to the UK's Daily Mail, Pitt's exact words were: "I was never for the death penalty before - I am willing to look at it again." 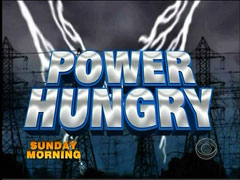 At the top of CBS's Sunday Morning, host Charles Osgood proclaimed: "From sky-high air-conditioning bills to gasoline-fueled vacations in the car, there's nothing like summer to remind us that we Americans are power hungry." In the story that followed later, correspondent Seth Doane declared: "In the wake of the Gulf oil disaster, calls for cleaner, greener energy, are growing louder."

Doane lamented: "America is still powered by the energy of yesterday. 95% of our electricity comes from an aging network of coal, natural gas, nuclear, and hydroelectric plants. Despite decades of promise, today less than 5% of our electricity comes from all other forms of alternative energy combined." He then turned to "Nobel Prize-winning physicist" and Obama administration energy secretary, Dr. Steven Chu: "Secretary Chu sees the oil spill as a tragedy, of course, but also as something else." Chu argued: "The United States has an opportunity to lead in what I consider to be essentially a new industrial revolution."

After detailing different forms of alternative energy, Doane moved on to liberal advocacy. He warned:"But agreeing on a national energy policy won't be easy....And the coal and petroleum lobbies spend millions to protect the status quo." Doane then cited the head of the left-wing group Environmental Defense Fund, Fred Krupp, who whined: "You know, we've passed three energy bills in the last ten years and none of them has done a damn thing to get us a brighter energy future." 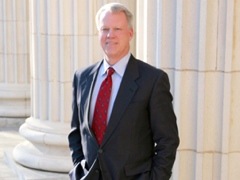 It has become clear that the Democratic establishment does not have as much of an interest in press freedom as they would have the public believe. But what is even more telling is the media's spotty response to censorship efforts in the Gulf of Mexico.

On Wednesday, House Natural Resouces Democrats rejected an amendment that would ensure press transparency in the Gulf. The amendment came mere days after the Coast Guard rescinded a policy keeping journalists at least 65 feet from "essential recovery efforts."

Offered by Rep. Paul Broun, pictured right, the amendment stated: "Except in cases of imminent harm to human life, federal officials shall allow free and open access to the media of oil spill clean up activity occurring on public lands or public shorelines, including the BP Deepwater Horizon oil spill.”

Since the amendment's defeat, the response from the mainstream press has been a deafening silence.

Most Transparent Administration Ever Makes Effective Reporting from Gulf a Felony 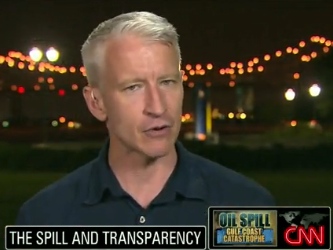 Effectively reporting on the Gulf oil spill is now a Class D felony, punishable by a fine of up to $40,000.

That's right, the most transparent administration in history has made it a felony, effective July 1, to get within 65 feet of what the Coast Guard determines are essential recovery efforts. According to Anderson Cooper, officials tried to up that number to 300 feet.

Cooper, who claimed federal officials prevented CNN on two occasions from taking photographs in the gulf, seemed frustrated when he reported on the new laws the day they went into effect. The press is "not the enemy here" he pleaded. The new policies, he said, make it "very easy to hide failure, and hide incompetence."

The Washington Post put the bad news for liberals right at the top of Monday's front page, left side: "Climate debate unmoved by spill." Reporters David Fahrenthold and Juliet Eilperin lamented that "great change" is not following the "great tragedy" of the BP oil spill. We haven't had an "awakening" to our wasteful ways:

Environmentalists say they're trying to turn public outrage over oil-smeared pelicans into action against more abstract things, such as oil dependence and climate change. But historians say they're facing a political moment deadened by a bad economy, suspicious politics and lingering doubts after a scandal over climate scientists' e-mails.

The difference between now and the awakenings that followed past disasters is as stark as "on versus off," said Anthony Leiserowitz, a researcher at Yale University who tracks public opinion on climate change.

Only liberals are "awake," while the public is "asleep." They wonder why newspaper readership is declining. Here's how the story started: 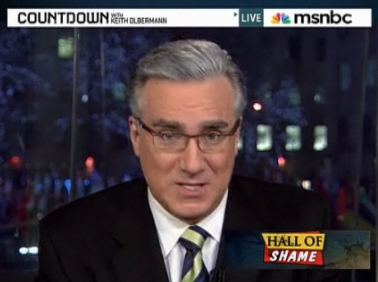 Keith Olbermann had a terrible day on Tuesday.

In baseball terminology, he went 0 for 3.

After NewsBusters reported two segments from his low-rated "Countdown" program that either included selectively edited transcripts to mislead viewers or material misrepresentations contradicted by numerous sources, the fact-checking website PolitiFact determined another statement made by MSNBC's hottest property was "False".

So egregious were Olbermann's comments that Politifact almost gave them their lowest rating, "Pants on Fire," which readers should recall from their youth always came after "Liar, liar."

Before we get to PolitiFact's analysis, let's witness Olbermann at his worst (video follows with transcript and LOTS of commentary, h/t Lachlan Markay):

Tavis Smiley: Just Because Gulf Residents Depend on Oil Drilling as Part of Their Economy 'Doesn't Make It Right'

Smiley hosted a Wednesday night interview with Rep. Henry Waxman (D) on his show, where the liberal Californian admitted that while alternative energy sources need to be explored and developed, America still needs to drill for oil, albeit safely.

But Smiley wondered aloud how American can move beyond politics and transcend its oil-dependent energy policy. He thought Obama's Oval Office speech was one that "most people, left and right, seem not to like."

"How do you move beyond the politics to make that happen?" Smiley then asked Waxman, even though, as he himself claimed, most of the country was not enamored with Obama's words.

Smiley also brought up the Gulf residents' clamors to keep oil drilling alive there. "I say this respectfully, because I understand how their economy works down there," he said, before asking why Gulf residents are hesitant to "move beyond oil drilling."

While the media have apparently given up -- if they ever seriously attempted -- on holding the Obama administration to account for its handling of the Gulf oil spill cleanup, Republican governors in the Gulf are a different story, particularly Louisiana's Bobby Jindal, a potential 2012 presidential hopeful.

In a short post at Time.com entitled "Battlefield General: Is Bobby Jindal Making Sense?", writer Alex Altman cast doubt on Jindal's handling of the oil spill cleanup while suggesting the conservative governor is hypocritical for his complaints about Obama's handling of the disaster at the federal level:

Underreported: The Irony of BP's 'Beyond Petroleum' PR Crusade

One narrative the liberal media has strenuously failed to develop is the incredible irony of BP presenting itself as the greenest oil company, the "Beyond Petroleum" folks who recognized they were boiling the planet with oil. In Friday's Wall Street Journal, Mark Mills reviewed a new book, Oil, by Tom Bower:

But the most interesting figure in Mr. Bower's narrative is not Mr. Putin but BP's Lord Browne, who understood cultural politics better than his peers. In the 1990s, BP launched what was arguably the oil industry's most successful public-relations campaign, for all the good it is doing the company now. The campaign transformed BP into a shining example of a progressive company—one supposedly "Beyond Petroleum."

It is clear from Mr. Bower's account that, while BP remained first and foremost an oil company, Lord Browne drank his own Kool-Aid, basking in encomia from the media and green mavens. He gave lectures at Stanford, appeared on "Charlie Rose," cozied up to Greenpeace and promised to spend $1 billion on solar technology.