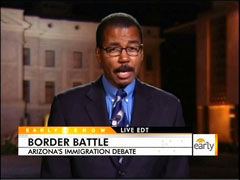 On Friday's CBS Early Show, correspondent Bill Whitaker reported on protests against Arizona's new immigration law, citing several opponents of the new measure, but failing to feature a single supporter. On Thursday's Evening News, Whitaker filed a nearly identical report that included a clip of at least one proponent of the legislation.

In the Early Show report, footage was show of an immigration law protestor declaring: "We are America. Get over it." Whitaker followed by proclaiming: "Opponents say requiring police to demand proof of citizenship from anyone they suspect is un-American. Even the mayor of Phoenix is suing to have the law overturned." A clip was played of Mayor Phil Gordon ranting: "Arizona and Phoenix is not the Arizona or Phoenix that you have seen portrayed by some individuals that have brought this racist, this hateful law to the state."

Whitaker noted how "protesters turned up the star power. Pop star Shakira voiced her opposition." A clip was played of the singer fretting: "I'm worried about the impact that the implementation of this law will have on hard working Latino families." Whitaker added: "Mexican American singer Linda Ronstadt spoke out, as well." Ronstadt remarked: "Gee, I better pack my passport, you know, coming to Tucson."