Early Wednesday morning, liberal CNN political commentator Cornell Belcher groaned during CNN’s midterms elections coverage that the Democratic Party’s top campaigner in President Barack Obama was unable to defend attacks against his record and help Democrats on the campaign trailer because he “was basically locked away in the White House."

At the Associated Press on Friday, Chris Tomlinson wrote a story of national significance ("State officials investigating Democratic activists") which the wire service appears not to have ever carried at its national site.

It is nationally significant because the establishment press, both in print and over the airwaves, has chosen to make the Lone Star State gubernatorial candidacy of Democrat Wendy Davis a national matter. However, continuing a pattern going back several months (examples here and here), when negative matters relating to her campaign or to those assisting it surface, all of a sudden we're supposed to believe nobody outside of Texas cares.

Voter Fraud is Awful, Ed Schultz Complains, Unless By Him to Stop GOP

Time for Ed Schultz to hire someone to vet what he says to make sure it doesn't embarrass him when juxtaposed with something he's previously said.

NYTimes' Carr: 'For Good or Ill (and Most Would Say Ill), No One Did It Like Mr. Breitbart'

New York Times media reporter David Carr's profile of the late Andrew Breitbart, "The Provocateur" was a slightly hostile look at the life and influence of the sleepless conservative activist, that included this unnecessary and petty parenthetical stab: "For good or ill (and most would say ill), no one did it like Mr. Breitbart."

Powell, a well-known opponent of former New York City Republican Mayor Rudy Giuliani as a Metro reporter, portrayed methods that have an honored place in investigative journalism as "dirty tricks" when done by young conservative activists. While admitting ACORN did wrong, he chalked it up to stupidity, as if there was nothing sinister about giving a pimp advice on how to falsify taxes to conceal a prostitution ring.

Former Catholic seminarian and left-wing radio host Bill Press took to his eponymous program today and devoted significant attention to the death of conservative blogger and author Andrew Breitbart. It was not all positive, although he did feature guests who had kind things to say about Breitbart's impact on Internet journalism.

"Raised a Catholic, I was taught the great phrase 'Necal [sic] nisi bonum*' you don’t say anything about the dead unless you’re saying good things about the dead. Well, then I should say nothing about Andrew Breitbart because I can’t think of one good thing to say about him." [MP3 clip here]

Anyone who saw what the Associated Press wrote when former Bush 43 press secretary Tony Snow died in 2008 (original AP article; related NewsBusters post) knew that the wire service would do what it could to subtly distort Andrew Breitbart's considerable accomplishments in exposing leftist hatred, duplicity, and criminality. The only question was what form(s) it would take.

Not surprisingly, reporters/distorters Philip Elliott and Sue Manning misrepresented or omitted key elements of the three episodes for which Breitbart will be best remembered -- the James O'Keefe-led ACORN stings; Shirley Sherrod, Pigford lawsuit opportunist; and his exposure (so to speak) of former Democratic Congressman Anthony Weiner's sleazy online escapades. The 11:44 a.m. version of their report (saved here for future reference, fair use and discussion purporses) was bad enough. In their 1:56 p.m. revision (saved here), perhaps egged on by the vitriol which has been posted all day at leftist sites, they descended into cheap-shot name-calling adjectives which would rarely if ever be used to describe activist leftists. In his opening hour today, Rush Limbaugh covered some of what happened during the three key episodes; I will expand on them later in the post:

Despite slipping mostly under the radar, John Stossel disclosed something on his FBN program last Thursday that should have garnered a lot more attention.

As he chatted with guest Andrew Breitbart, Stossel admitted that the conservative publisher had offered him the James O'Keefe/Hannah Giles/ACORN scoop, but the former ABC Newser declined due to politics at the network he used to work for (video follows with transcript and commentary):

Leftist community organizing group ACORN "should pay back $3.2 million in federal funding, mostly because it hasn't shown that its lead-removal work was performed at a reasonable cost," the Associated Press's Kevin Freking reported today. "The auditors also said that some of the grant money was spent inappropriately."

"Congress has cut off ACORN's federal funding after allegations of voter registration fraud and embezzlement. The group began closing its operations in March," Freking noted.

After Railing About Secret GOP Money Buying the Election, the NY Times Dumps on GOP Claims of Dem Vote Fraud

After all the front-page caterwauling about “anonymous donors” supposedly “buying the election” by running ads favoring the GOP this election cycle, the New York Times isn’t showing itself overly concerned about actual cases of potential vote fraud involving Democrats.

In his Wednesday story “Fraudulent Voting Re-emerges as a Partisan Issue.” reporter Ian Urbina quickly dismissed concerns about vote fraud from “conservative activists,” claiming that 2006 accusations from the same quarters “turned out to be largely false.”

In 2006, conservative activists repeatedly claimed that the problem of people casting fraudulent votes was so widespread that it was corrupting the political process and possibly costing their candidates victories.

The accusations turned out to be largely false, but they led to a heated debate, with voting rights groups claiming that the accusations were crippling voter registration drives and squelching turnout. 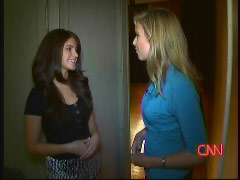 CNN's Abbie Boudreau omitted the left-wing ideology of discredited organization ACORN in her hour-long documentary on young conservative activists, "Right on the Edge," which aired Saturday evening. Boudreau also labeled Ryan Sorba, one of the subjects of her documentary, "anti-gay," and gave an overgeneralized account of an incident which Sorba took part in.

The correspondent profiled Christian Hartsock, who "directs films with a conservative message;" author Jason Mattera; "anti-abortion activist" Lila Rose; Sorba; and Hannah Giles and James O'Keefe, who "dressed up as a prostitute and a pimp to expose ACORN." Seven minutes into the 8 pm Eastern hour, as Boudreau introduced Giles, she noted that "there's a reason Hannah Giles became an overnight sweetheart of the conservative Movement. In September 2009, she and James O'Keefe used hidden cameras to expose ACORN." The CNN correspondent then gave a very sparse and favorable description of the group: "ACORN helps low-income people register to vote, find housing, and file taxes."

By Matthew Balan | September 30, 2010 5:07 PM EDT
On Wednesday's Rick's List, CNN's Rick Sanchez implied that Fox News played some kind of part in James O'Keefe's attempted "punk" of correspondent Abbie Boudreau: "The same right-wing videographer, who entrapped and embarrassed innocent people in the past, tries it again- this time on a CNN correspondent....How could he try something so stupid, and what was Fox News's role?" [audio clip available here]

Sanchez made this parting shot at his longstanding nemesis on the last prime time edition of his show, as the 8 pm time slot on CNN is being taken over on October 4 by a new program featuring former New York governor and "Client Number Nine" Eliot Spitzer and pseudo-conservative Kathleen Parker. The anchor raised his implying question about the apparent "role" of Fox News during the lead-in to his program. Instead of making a direct accusation against Fox News, as he did in the aftermath of the murders of three Pittsburgh, Pennsylvania police officers in April 2009, he replayed an earlier interview with Boudreau from the top of the 4 pm Eastern hour of his program.