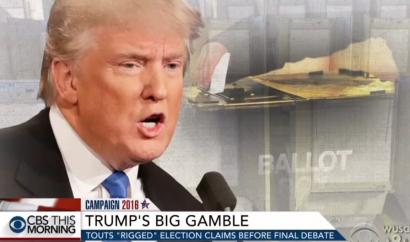 Saturday’s New York Times attacked Republican positions on voting from two angles. Reporter Yamiche Alcindor responded to Donald Trump’s refusal to say he would accept the election results with typical liberal hyperbole, in the second Times article in two days that compared Trump’s comments to actual dictatorships abroad: “For Some Immigrants, Trump’s Warning on Election Results Sounds All Too Familiar.”

Many voters saw it as a historic breach of tradition when Donald J. Trump refused to say this week that he would accept the result of the election if he lost.

For Maria Julia Echart, who grew up in Argentina, it felt historic in another way.

She said it reminded her of how her native country’s military ousted its democratically elected president in 1976, and how after the ruling junta began to kill activists, her family went into hiding. She remembered sleeping on the floor in a bare apartment with her mother, and being so scared that she once wet her pants.

“I never thought in a million years this country would go through this after coming from Argentina,” said Ms. Echart, 62, who moved to the United States in 1987.

Fairly or not, Mr. Trump’s critics have painted him as being unwelcoming to immigrants, dating back to his calls for mass deportations and for building a wall along the border with Mexico. But his most recent comments about the legitimacy of the election, with their whiff of third-world tumult, have perversely made some immigrants feel right at home.

But it was precisely America’s reputation as a role model for democracy that made the candidate’s comments so jarring for some naturalized citizens. In their minds, they said, questions about a president’s legitimacy were inseparable from chaos and bloodshed, and thus they could not stop themselves from thinking the worst.

Alcindor brought in a Democratic hero to chide Trump.

Former President Jimmy Carter, whose organization the Carter Center is known worldwide for election monitoring, has gone so far as to assure people that Mr. Trump’s complaints about the American voting process should not cause worry.

Reporter Michael Wines took another angle, dismissing the danger of vote fraud as a false campaign tactic by Republicans in “How Citing Voter Fraud Became a Political Tactic.”

In asserting that the presidential election has been rigged against him and casting accusations of widespread voter fraud, Donald J. Trump has tapped deep into an increasingly prevalent theme of Republican Party politics: that Democrats try to steal elections, not win them.

It is the culmination of roughly two decades of alarms, investigations and political gamesmanship in which remarkably little voter fraud has been documented, but the conviction that it is widespread has gone from a fringe notion to an article of faith for many Republicans.

And issues of race, often a subtext in Republican charges of fraud, were accentuated by the election of the nation’s first black president in 2008. Republican accusations of voter fraud, as in St. Louis, have frequently been directed at minority groups in cities such as Philadelphia and Chicago. The issue now thrives in the hothouse of the internet, where corrections of fact and debunkings rarely catch up with the claims they address.

The notion of widespread fraud has also become a potent political weapon: Since 2010, 16 states have placed new identification requirements on voting in the name of security. Increasingly, they have required voters to produce proof of identification that young, poor and minority voters -- often Democrats -- disproportionately lack.

And, perhaps most important, the principal fraud that Mr. Trump and most Republicans assail, and the only one that voter identification laws address -- voters who intentionally misrepresent themselves at polling places -- is exceedingly rare, experts say. They add that it is almost impossible to perpetrate on a scale that would affect the results of a national election. Democrats also note that with Republican domination of state governments, voting nationwide is increasingly overseen by Republicans.

The possibility that fraud or incompetence could change the outcome of a close presidential contest, as some claim happened when John F. Kennedy took the White House on the strength of an 8,000-vote margin in Illinois, is at least conceivable, experts say. But even other Republicans have scoffed at Mr. Trump’s claims that this year’s election could be rigged by voter fraud. Gov. John Kasich of Ohio, a Republican primary opponent, likened them on Wednesday to “saying we never landed on the moon, frankly. That’s how silly it is.”

(Strange, then, how seriously the Times took charges of vote fraud after John Kerry lost to George Bush in 2004.)

Yet the charges by Republicans that fraud is pervasive have grown in the last 15 years, driven both by the party’s rightward shift and by national events.

Again the Times came to the defense of the far-left housing activist group ACORN, which collapsed under the weight of scandal:

Investigations suggested that the group’s greatest crime may have been sloppiness, not intended fraud. But the charges added to a snowballing public conviction that fraud is rife....

“The frame is being controlled here by those who are promoting the idea that fraud is the problem,” said Lorraine Minnite, a Rutgers University professor of political science and author of the book “The Myth of Voter Fraud.”

“If we shifted the framework to people who are trying to vote but don’t get their votes counted,” she said, “we’d be having a different discussion.”

Try as our Democratic friends might, there is no denying that fraudulent voting happens. Illegal immigrants and other non-citizens cast votes: Research from politics professors Jesse Richman and David Earnest finds that one in six non-citizens are registered to vote, and many of them report voting illegally. Legal U.S. voters have been found illegally voting in multiple states. Efforts to purge voter rolls of ineligible voters, e.g. dead people, have been resisted strongly by Democrats, as have efforts to see to the enforcement of laws against voting by felons. It is easily within the realm of statistical possibility that these votes have been decisive in at least two elections: Al Franken’s 2008 Senate election and Barack Obama’s 2008 victory in North Carolina.