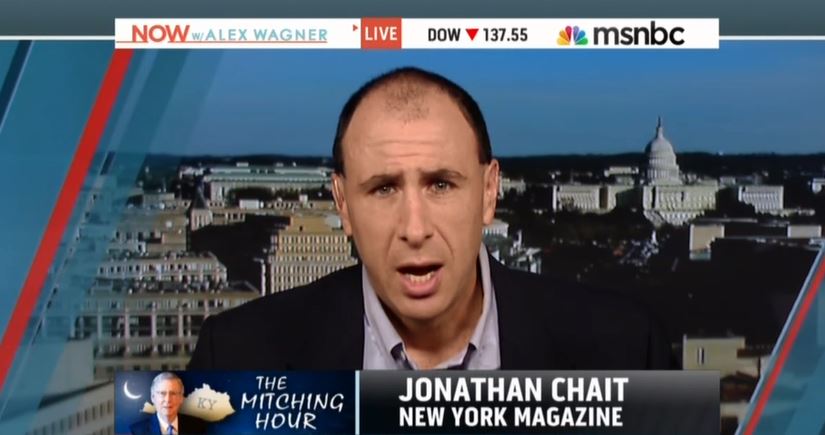 Certain outlandish ideas, such as Holocaust denial or a belief in UFOs, tend to keep those who hold them from political office. In a Thursday post, New York magazine blogger Jonathan Chait suggested another “completely disqualifying position”: the one most Republicans have regarding climate change.

Chait trashed the “bizarre ramblings of climate-science skeptics” and the “primitive” mind of Sen. James Inhofe as part of the buildup to his conclusion that GOP thinking on climate change is in the same league as ignorance of basic arithmetic: “If a candidate for a managerial job at your office insists that two plus three equals seven, it wouldn't matter how well-qualified this candidate may be at any other aspect of the job. Even if you agreed with everything else the Republicans stood for, how could a party so obviously unhinged be entrusted with power?”

[Wednesday] night, an event rapidly transpired in Washington that, while routine, was also so utterly lunatic it bears reconsideration. During a series of votes on the Keystone Pipeline, Senate Democrats proposed an amendment affirming that “human activity significantly contributes to climate change.” The amendment failed because only five Republican Senators supported it…[T]he outcome of the vote reveals something profound and disturbing.

The Senate drama revolved around the Republican plan to hold a vote conceding that climate change itself is real, but — in keeping with the bizarre ramblings of climate-science skeptics — that it is all happening naturally. “Man cannot change climate,” James Inhofe declared. “The hoax is that there are some people that are so arrogant to think that they are so powerful that they can change climate.”

It is familiar, and yet worth reemphasizing, that Inhofe is not a random kook wearing a sandwich board who managed to slip past the Senate’s security guards, but a senator and the chairman of the Environment and Public Works Committee…

It is hard to imagine how such a bizarre conclusion could survive even a mind as primitive as Inhofe’s. To believe that human activity contributes to climate change, you need to believe two things. One, that certain gases trap higher levels of heat than other gases. Second, that burning fuel containing those heat-trapping gases releases them into the atmosphere. Which one of those beliefs is arrogant?

Inhofe not only maintains control of the chief environmental committee in the upper chamber, but also managed to hold 90 percent of his party with him on a vote to affirm his deranged beliefs…

The media’s instinct is to dismiss votes like those from last night as mere gestures in empty symbolism. Yet, while the vote did not change any policy outcomes, it ought to carry far more weight than a simple message vote. Or, rather, the message is of the highest importance. The Republican Party confidently and forthrightly rejects the firm conclusions of science on a major public-policy question. Isn’t that a completely disqualifying position? If a candidate for a managerial job at your office insists that two plus three equals seven, it wouldn't matter how well-qualified this candidate may be at any other aspect of the job. Even if you agreed with everything else the Republicans stood for, how could a party so obviously unhinged be entrusted with power?