Linda Greenhouse covered the Supreme Court for the New York Times for 30 years until accepting a downsizing buyout in 2008. She continues to write bi-weekly columns there.

Greenhouse is absolutely appalled that the King v. Burwell lawsuit has gotten to the Supreme Court. As will be seen, she's also quite selective in her outrage.

King is one of several Affordabale Care Act-related litigation in which plaintiffs insist that health insurance premium subsidies should not be available the large majority of states which chose not to set them up, because such subsidies are, according to the plain language of the law, available only to citizens who purchased policies on exchanges "established by the State."

In August, Greenhouse railed against the related Halbig lawsuit as an exercise in "raw judicial politics" (bolds are mine throughout this post):

... this latest round, catapulted onto the Supreme Court’s docket earlier this month by the same forces that brought us the failed Commerce Clause attack two years ago, opens a window on raw judicial politics so extreme that the saga so far would be funny if the potential consequences weren’t so serious.

... Nor is the creativity and determination of the Affordable Care Act’s opponents any great revelation — not after they came within a hairsbreadth of getting the law’s individual mandate thrown out on a constitutional theory that would have been laughed out of court not too many years ago.

Reader will recall that the "commerce clause" argument was so "extreme" that Chief Justice John Roberts had to call the Obamacare individual mandate penalty — the amount a citizen must pay if they choose not to carry health insurance coverage — a "tax." He did so because it was the only way to he could uphold the law, which he was clearly determined to do, in the face of the commerce clause's obvious legitimacy and relevance.

So it's already more than clear that Greenhouse's definition of "extreme" is "anything to the left of my own personal opinion, regardless of what the law and the Constitution say."

Continuing from that August column, with Greenhouse's go-to excuse for why Halbig and similar cases should fail:

Of course there are ambiguities and inconsistencies in a 900-page bill that never went to a conference committee for a final stitching together of its many provisions.

In other words, Greenhouse has gone beyond Nancy Pelosi's infamous statement before the Act's passage that "We have to pass the bill so that you can find out what is in it." In Greenhouse's world, now that they've passed it in an irresponsible, furious rush which bypassed much of the normal legislative process, anything that isn't clear must be interpreted in a way which keeps the law intact.

In her most recent column ("Law in the Raw"), the poor woman is absolutely beside herself that the Supreme Court chose to take on the King case: 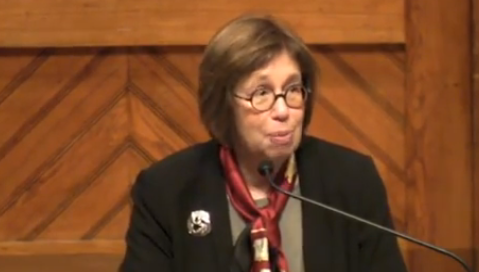 Nearly a week has gone by since the Supreme Court’s unexpected decision to enlist in the latest effort to destroy the Affordable Care Act, and the shock remains unabated. “This is Bush v. Gore all over again,” one friend said as we struggled to absorb the news last Friday afternoon. “No,” I replied. “It’s worse.”

There was no urgency. There was no crisis of governance, not even a potential one. There is, rather, a politically manufactured argument over how to interpret several sections of the Affordable Care Act that admittedly fit awkwardly together in defining how the tax credits are supposed to work for people who buy their health insurance on the exchanges set up under the law.

... the case the court agreed to decide, King v. Burwell, doesn’t fit the normal criterion for Supreme Court review. There is no conflict among the federal appellate circuits. ... In the King case, a three-judge panel of the United States Court of Appeals for the Fourth Circuit, in Richmond, Va., unanimously upheld the government’s position that the tax subsidy is available to those who buy insurance on the federally run exchanges that are now in operation in 36 states.

A panel of the United States Court of Appeals for the District of Columbia Circuit ruled 2-to-1 the other way, accepting the plaintiffs’ argument that the language of the statute limits the tax subsidies to those who buy insurance through the state exchanges, which only 14 states have chosen to set up. The full appeals court quickly vacated the panel’s judgment and agreed to rehear the case. The new argument was set for next month, and the briefs were already filed. The absence of a circuit conflict and an imminent rehearing by the country’s most important court of appeals would, in the past, have led the Supreme Court to refrain from getting involved.

So no, this isn’t Bush v. Gore. This is a naked power grab by conservative justices who two years ago just missed killing the Affordable Care Act in its cradle, before it fully took effect. When the court agreed to hear the first case, there actually was a conflict in the circuits on the constitutionality of the individual insurance mandate. So the Supreme Court’s grant of review was not only unexceptional but necessary: a neutral act. The popular belief then that the court’s intervention indicated hostility to the law was, at the least, premature.

Not so this time. There is simply no way to describe what the court did last Friday as a neutral act. Now that the justices have blown their own cover, I notice the hint of a slightly defensive tone creeping into the commentary of some of those who have been cheering the prospect of rendering the Affordable Care Act unworkable ...

Actually, Linda, the tone I notice is that of intense hypocrisy on your part.

I suspected that Greenhouse's contention that the court, to quote Taylor Swift, "never-ever-ever-ever" takes a case where there is an "absence of a circuit conflict and an imminent rehearing," was dishonest bluster.

... Finally, I find Greenhouse’s stated rationale puzzling because there are instances of the Court granting cert absent a split or an emergency when Greenhouse apparently hasn’t found the grant at all objectionable. Consider the cert petition in Lawrence v. Texas, which did not allege a split or claim an emergency. The Court granted cert even though the petition did not meet the usual criteria for cert. When Greenhouse has written about Lawrence, she hasn’t lamented the cert grant as a “power grab” (naked or otherwise) that ruined her faith in the Supreme Court. Instead she has celebrated what a wonderful moment it was when the Court handed down its opinion.

Kerr does not exaggerate when he writes that Greenhouse celebrated the Lawrence decision, which "invalidated sodomy laws in 13 other states, making same-sex sexual activity legal in every U.S. state and territory":

I think that was probably the most gripping scene I ever witnessed at the Court—when Kennedy read the majority opinion in Lawrence v. Texas. Usually, when you go up to the Court, you don’t know what’s coming that day. But it was the last day of the term, and Lawrence was the last undecided case. So everybody knew, and the Court was filled with gay and lesbian members of the Supreme Court bar. When Kennedy got to where he said Bowers v. Hardwick was wrong when it was decided, it’s wrong today, and we hereby overrule it, all these lawyers in the bar section started crying. It was just a wonderful scene. It was great.

Gosh, how could Linda Greenhouse "forget," in a case sooooo personally memorable, that Lawrence was a situation where "the Court granted cert even though the petition did not meet the usual criteria for cert"? And how could the New York Times allow Greenhouse to push such an important falsehood in her column?

The response is that the Court's decision to take on King v. Burwell is not "extreme," and that therefore Linda Greenhouse needs to get over herself, and be honest with her readers.

In the interest of self-preservation, I'm not holding my breath until that happens, because I don't expect that it will. As Instapundit wrote in reaction to Kerr's post, "Remember, for many years she was seen as a trustworthy source of objective information." It would appear that this never should have been the case.