The April 13 edition of People magazine displays the usual liberal bias – trashing Gov. Mike Pence on religious freedom with attack-quotes from Hillary Clinton and the policy genius known as Miley Cyrus. (College: None.)

But they also published a gushy two-page spread on “Ted Kennedy’s Treasures.” Geared like everyone else in the liberal media to the opening of the new Teddy shrine. A subheadline noted "The late Senator's office -- from photos to letters and dog bowls -- has been re-created at Boston's Edward M. Kennedy Institute." 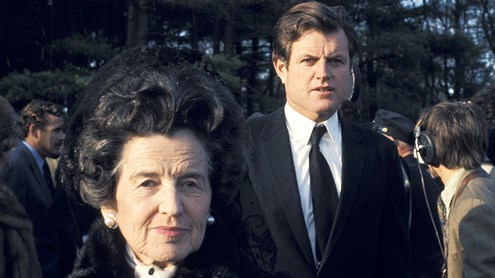 For almost 47 years he was known as the Lion of the Senate. Yet anyone calling on Sen. Ted Kennedy at his Capitol Hill office was greeted by a sentimental lamb.

“Teddy would put visitors at ease by showing them all these things from the people and the places he loved,” his widow, Vicki Kennedy, tells People...

[T]he collection includes a scolding from matriarch Rose Kennedy when he was 40 [in 1972]. “I noticed...you are quoted using the word ‘ass’....I am sure you realize it does not really look good in print. Love, Mother.”

Says Vicki: “He was a family man. And he could really laugh at himself.”

One hopes People is proud of burying the reality of Kennedy’s decades of boozing, drug use, and womanizing beneath this propagandistic photo collection.

One wonders what “Mother” thought of Chappaquiddick in 1969, when Sen. Kennedy left the scene of an accident and left Mary Jo Kopechne behind to suffocate in the car. That won’t be in the “family man” collection of “Treasures.”

On pages 56-58, in the "Passages" section, under "Controversy," they copied the negativity around Mike Pence:

Indiana governor Mike Pence, 55, sparked outrage on March 26 when he signed the Religious Freedom Restoration Act into law. The legislation allows any individual or corporation to refuse service to gay, lesbian, bisexual and transgender individuals on religious beliefs. 'Sad this new Indiana law can happen in America today,' Hillary Clinton tweeted. Miley Cyrus, writing on Instagram, said politics is 'the only place that has more idiots than Instagram.'"

On page 14, in the “StarTracks” section, they celebrated Ben Affleck speaking on Capitol Hill – with the headline “BEN TAKES CAPITOL HILL.”