Some of the nation's most influential newspapers sympathetically broke out the euphemisms for Obama as he prepares for unilateral executive action to "shield" some illegal immigrants from the rule of law, which they call "deportation relief." He's "cheered by reform advocates." Here's the roundup for November 20 front pages, beginning with the Obama publicists armed with happy words:

Obama to unveil immigration order: Millions could get deportation relief

Obama to Act on Immigration: Executive Order to Shield More Than Four Million From Deportation Sets Up Bitter Fight With GOP

Obama set to give millions a reprieve

Some papers were more neutral. 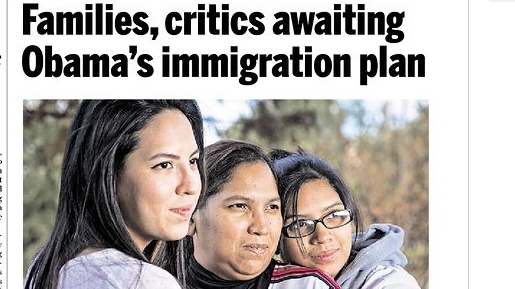 Immigration overhaul to touch many in state

The Denver Post won for vagueness, over the Washington Post account: “Obama set to unveil action: The president’s use of executive powers is likely to spark a political fight”.

The Washington Times sounded like, well, a conservative paper, focusing on the Democratic-base politics:

The Milwaukee Journal-Sentinel surprisingly went to Paul Ryan for criticism.