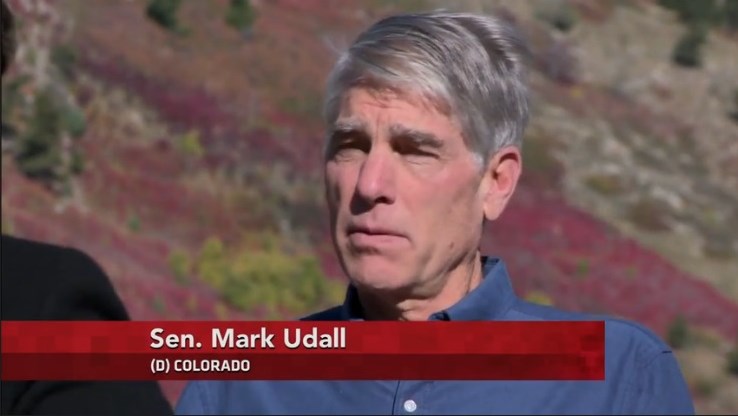 In a Tuesday night segment on Colorado’s Senate race on the PBS NewsHour, anchor Gwen Ifill spurred liberal Sen. Mark Udall to trash the left-leaning Denver Post for endorsing his Republican opponent Cory Gardner for being Johnny One-Note on abortion.

Ifill said “Udall shrugs off the hometown rebuke.” He complained: “If the Denver Post doesn’t think women’s reproductive rights are important, that’s their decision, but that’s an important part of my campaign.”

There was also an (unintentionally) hilarious point when Sen. Udall, who’s voted for Obamacare and with Obama 99 percent of the time, proclaimed he was fiercely independent and a libertarian, like the rest of Colorado:

UDALL: He’s saying that I’m a social issues warrior. In fact, he is. I’m an economic issues warrior. You talk to women, this is about economics. It’s also about respect. And Colorado’s fiercely independent. We’re libertarians. And we respect our freedoms. And we think government, above all, shouldn’t be involved in these really private decisions.

It was nice to see that Ifill interviewed women on both sides of the abortion debate, and let a pro-life woman say that the pro-abortion women aren't all women. Briana Johnson, who "describes herself as pro-life," declared "It’s hard when a group of women is going on and claiming to speak for the entire population of women, because, yes, I don’t — I don’t relate to that. They say you know [Republican candidate] Cory Gardner’s too extreme for women of Colorado. Well, that’s not what I believe, and that immediately alienates me."

In the fuller interview online, Ifill noted that so-called libertarian Udall has campaign with lefties like Elizabeth Warren and Hillary Clinton, but not President Obama (not that PBS would ever call them lefties). Udall said he was excited for Michelle Obama to come to Colorado, so Ifill asked if he would show up for that, unlike when President Obama came to the state.

But Ifill also displayed a flash of liberal disappointment, asking “Why isn’t this a cakewalk for you?”