Sunday's New York Times Magazine includes an interview with former "American Idol" runner-up Clay Aiken, now running against Republican Rep. Renee Ellmers in North Carolina's 2nd district. Aiken's getting national media despite the hopelessness of the race: The Cook Political Report has ranked the 2nd District a "plus-10" - meaning residents vote Republican at a rate 10 percent higher than the rest of the country.

Late in the interview, Times reporter Jim Rutenberg brings up the dangerous question: How favorably do you view Barack Obama? Clay got out the ten-foot pole -- Aiken fans might hear him singing "From A Distance" by Bette Midler. 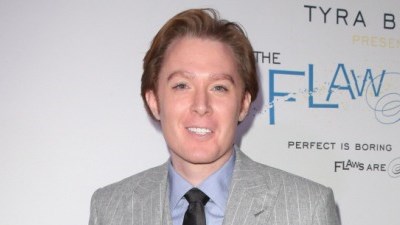 Do you think Obama has been a good president?

I think every president is on a sliding scale somewhere. There are certainly areas where I disagree with him.

Do you want him to come campaign for you?

You’re good at staying on message.

Years of being told: “When you get on that talk-show couch, make sure to plug your album.” That’s why.

On September 19, The Washington Post put Aiken on the front page, and Post reporter Ben Terris even quoted the Cook Political Report only to highlight Aiken’s policy wonkery:

There have been plenty of celebrities, from lists A through C, who have made their way into elected politics. Ronald Reagan and Arnold Schwarzenegger went from acting careers into executive offices, Jim Bunning and Heath Shuler left behind a life in sports to serve in Congress, and today there is a congressman from Wisconsin who got his start in the public eye on MTV's "The Real World." But Aiken knows that to be successful means looking more Carolina and less Hollywood.

This means that despite being in the public eye there are certain things he is very private about. If he were in a relationship, for example, he would not talk about it. ("It's been a long time since I've been in one though," he says. "I tell people I'm 'in dry dock.' ") He also does not talk about his son, Parker. Aiken became a father in 2008 after he and his best friend, Jaymes Foster, conceived [?] via in vitro fertilization. Parker lives with his mother in Los Angeles but recently spent the summer with Aiken.

"I chose a life in the public; he did not," the candidate says. And whether it comes naturally or not, his choice to lead a public life has left Aiken well-prepared for retail politics.

During a steamy mid-September weekend two months before the election, Aiken stopped at a VFW, where he impressed volunteers at a car show with his knowledge of Veterans Affairs programs and which community colleges give credit for military involvement. He talked about the need to secure our borders with a woman at a street festival and name-checked the conservative think tank the Heritage Foundation and Republican Sen. Richard Burr and former senator Jesse Helms in a local television interview (it's important for Aiken to make clear that he is a moderate [?] Democrat).

It's not necessarily that Aiken has an encyclopedic knowledge of the issues - though the Cook Political Report, a hard-to-impress bunch, said he was "better-versed and more in-depth than plenty of state legislators we have met" - it's that he's an incredibly good listener.

"Oprah said something to me years ago, one of the first times I met her," Aiken says, aware that stories like these don't necessarily help his cause as just a regular Joe. "She said being a good talk show host isn't about being a good talker, it's about being good at listening. It's a misnomer. I think a lot of politicians think being a good one is knowing the right thing to say. I think it's knowing when to shut the hell up."

That would explain the scampering away from Obama.