In a shocker, New York Times TV critic Alessandra Stanley panned the latest cast of “The View” on ABC with the headline “After 17 Years, ‘The View’ Isn’t So Clear Anymore.”

Stanley found she missed Elisabeth Hasselbeck – “opinionated, emotional, and easily drawn into ideological spats – and dismissed Nicolle Wallace, who “didn’t say a word when Ms. Perez joked about Mitt Romney having a vagina.” To be fair, she wasn’t on camera. But Wallace clearly has to toe a line drawn by the new queen of the show, Rosie O’Donnell.

“The View” was once distinctive mostly because the hosts argued — sometimes at the highest decibels — over news events, politics and social issues. Nicolle Wallace, a political consultant and communications director in the George W. Bush White House, took over the spot once occupied by Ms. Hasselbeck, the lone conservative. Ms. Hasselbeck, now at Fox News, was a television personality (she was a contestant on “Survivor”) who happened to be conservative. On “The View,” she wasn’t a political expert but she was opinionated, emotional and easily drawn into ideological spats that were often fraught and sometimes instructive.

She spoke from the heart, not from articles in The Weekly Standard, and brought an opposing view to daytime television debate that all too often falls into two extremes: the lively, giggly, fake showbiz intimacy of shows like CBS’s “The Talk,” or the amped-up confrontation-as-entertainment of “Dr. Phil” or Maury Povich.

Ms. Wallace, who was also a consultant to the 2008 campaign of John McCain and Sarah Palin, is a smooth political operator who prefers to finesse differences rather than strip them bare.

On Monday she didn’t disagree with anyone in a discussion of the N.F.L.’s handling of the Ray Rice scandal. She didn’t say a word when Ms. Perez joked about Mitt Romney having a vagina. Dodging questions about her rocky working relationship with Ms. Palin, Ms. Wallace implied that the ill will came entirely from that politician. 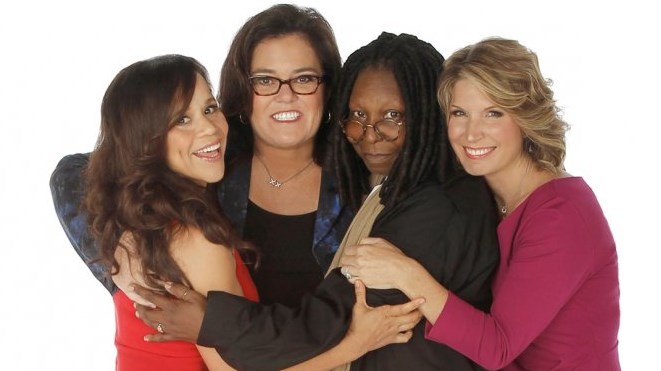 But Ms. Wallace did artfully signal her distance from the mistakes of the Bush administration.

She gave an amusing account of the day in 2006 when Dick Cheney, then vice president, shot a friend in a hunting accident, and she let on that she had nothing to do with Mr. Bush’s decision to fly over the area devastated by Hurricane Katrina rather than visit. On that day, she said blithely, “I was in Mykonos getting married.”

Ms. Hasselbeck didn’t know a lot, but she would say almost anything. Ms. Wallace knows plenty and prefers to keep her feelings to herself. That’s a good strategy for a political strategist, but it’s not the strategy that made “The View” a hit.

Ken Tucker of The Hollywood Reporter (like Stanley, a liberal) was also bored by the lack of real disagreement:

Wallace is a very different kind of Republican View host from Elisabeth Hasselbeck. Serene where Hasselback was bubbly, silent during the domestic-abuse "Hot Topic" where Hasselbeck would have jumped into the fray, Wallace may have been merely gauging the temperature of the studio audience, but she didn't provide the necessary sparks required as contrast to the strident liberalism of O'Donnell or the grumpy contrarianism of Goldberg.

Perez' best moment came when she asked Wallace of Sarah Palin, "When did you wanna just pop her?"

To be sure, that comment and well as nearly everything the other Rosie said, when combined with Wallace's moderate-Republican positions, are going to give Fox News and other conservative outlets the opportunity for many faux-appalled conniption fits. But for anyone else watching, the controversy factor was pretty nil.