ABC and CBS on Wednesday night and Thursday morning ignored Democratic Senator Dick Durbin's smear that Republicans are keeping attorney general nominee Loretta Lynch in the "back of the bus." NBC mentioned the liberal politician's attack, but featured no critical analysis or questioning of the remark.

Instead, Kelly O'Donnell explained, "Today, a top Senate Democrat compared Lynch's treatment by Senate Republicans to civil rights icon Rosa Parks." She then featured Durbin assailing, "The first African-American woman nominated to be attorney general is asked to sit in the back of the bus when it comes to the Senate calendar."

O'Donnell noted it has been "130 days" since "President Obama chose Loretta Lynch to be attorney general." For emphasis, the journalist added, "Lynch has waited longer than the past five attorneys general. In that span, Boston was buried in more than 100 inches of snow, and the Kentucky Wildcats had enough time to win 34 straight basketball games."

Of course, there was no mention of the fact that Durbin actively opposed George W. Bush's nomination of the African American Condoleezza Rice for Secretary of State. 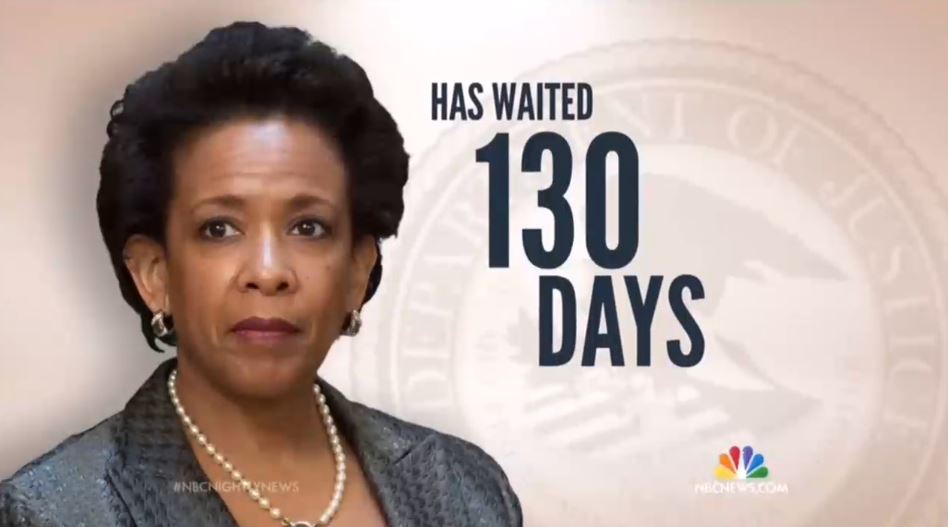 On June 16, 2005, Durbin took to the Senate floor for a comparison that linked U.S. troops to mass killers like Pol Pot and the Nazis:

Durbin read from an FBI report that included descriptions of one case at Gitmo in which a detainee was held in such cold temperatures that he shivered, another in which a prisoner was held in heat passing 100 degrees, one in which prisoners were left in isolation so long they fouled themselves and one where a prisoner was chained to the floor and forced to listen to loud rap music.

"If I read this to you and did not tell you that it was an FBI agent describing what Americans had done to prisoners in their control, you would most certainly believe this must have been done by Nazis, Soviets in their gulags or some mad regime — Pol Pot or others — that had no concern for human beings," Durbin said last week. 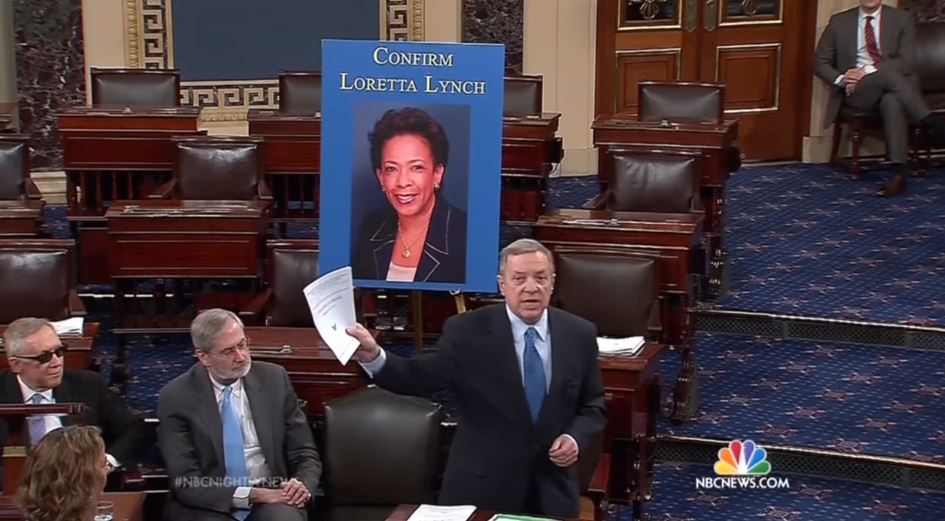 For that smear, only NBC bothered mentioning Durbin's comparison. According to a June 17, 2005 CyberAlert from the Media Research Center, the network painted the Bush White House as the aggressor. Then guest-anchor Campbell Brown asserted:

CAMPBELL BROWN: And the war of words over the prison camp at Guantanamo Bay, Cuba, continued today with the White House attacking a Democratic Senator for comparing interrogation tactics at Guantanamo Bay, which were contained in an FBI report, to those used by the Nazis, the Soviets, and the Khmer Rouge. Press Secretary Scott McClellan calls Senator Richard Durbin's remarks 'beyond belief,' and said U.S. soldiers go out of their way to treat prisoners humanely. Durbin said not only will he not apologize, but the administration should apologize for the situation at Guantanamo.

A transcript of the March 18, 2015 Nightly News segment is below: 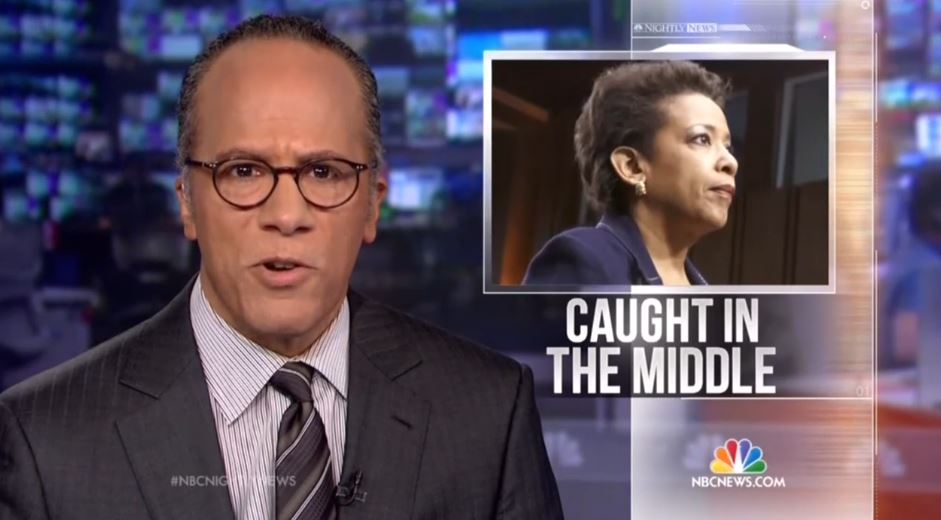 LESTER HOLT: High drama in Washington where tonight, the latest tug of war involves a bill to combat human trafficking that somehow spiraled into an argument over abortion and a President’s nominee for attorney general is caught in the middle with tempers beginning to flare. NBC's Kelly O’Donnell is on Capitol Hill.

KELLY O’DONNELL: Caught in a Washington waiting game. [TO LORETTA LYNCH] Good morning Ms. Lynch, are you concerned about your confirmation?

O’DONNELL: 130 days after President Obama chose Loretta Lynch to be attorney general, still no vote to confirm her. Lynch has waited longer than the past five attorneys general. In that span, Boston was buried in more than 100 inches of snow, and the Kentucky Wildcats had enough time to win 34 straight basketball games. [INAUDIBLE] Today, a top Senate Democrat compared Lynch's treatment by Senate Republicans to civil rights icon Rosa parks.

DEMOCRATIC SENATOR DICK DURBIN (Ill.): The first African-American woman nominated to be attorney general is asked to sit in the back of the bus when it comes to the Senate calendar.

O’DONNELL: Republican leaders say Lynch will get her confirmation vote, but not before the Senate passes a bill to help survivors of human trafficking. Many Democrats supported that bill, but last week claimed they did not know it contained a provision that blocks government funds for most abortions, language Republicans say was in the legislation for months.

REPUBLICAN SENATOR JOHN CORNYN (Tex.): They didn't know it was there. They didn't read the bill apparently.

O’DONNELL: Democrats refuse to move forward unless that provision is dropped. So for now, Loretta Lynch is left waiting. Kelly O’Donnell, NBC News, the Capitol.