Journalist Ezra Klein on Monday pronounced that if economic conditions continue, Hillary Clinton will win "42 states" in 2016. The former Washington Post columnist, now the editor at Vox.com, appeared on MSNBC's All In to prognosticate. [MP3 audio here.]

In 2010, the liberal blogger lamented the "confusing" nature of the U.S. Constitution. He complained, "The issue of the Constitution is that the text is confusing because it was written more than 100 years ago and what people believe it says differs from person to person and differs depending on what they want to get done." 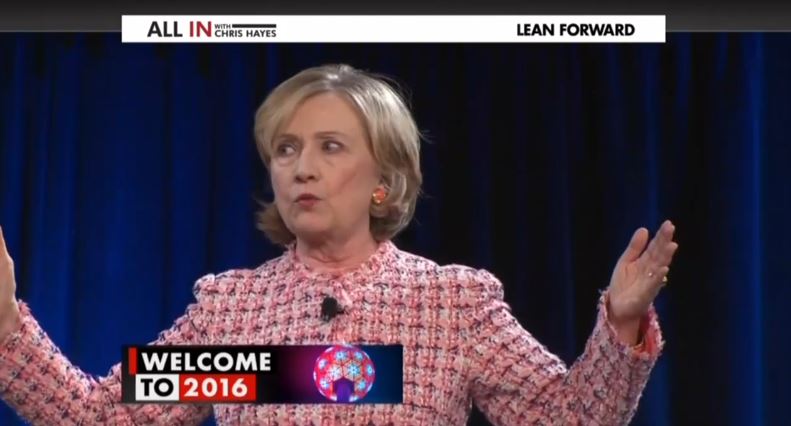 (In fact, the Constitution was actually written almost 228 years ago. Slightly more than "100.")

Regarding the "political science literature" that Hayes and Klein cited for the 2016 call, it should be noted that Ray Fair, a Yale economist who pioneered predictive data for presidential elections, confidently declared that George H.W. Bush would be reelected in 1992. 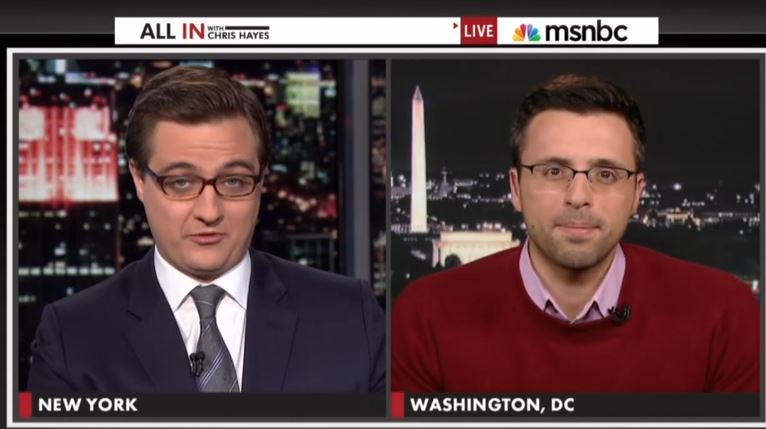 According to the September 6, 1992 Boston Globe:

Ray Fair is a Yale economist who looks at the economy of production levels and prices. His study of presidential elections in this century also leads him to emphasize incumbency's importance. His data point to a Bush landslide, with a margin of 55 percent.

Bush ended up with 38 percent. Will Klein do better with his prediction? Will Hillary Clinton win 42 states? Check back on November 8, 2016.

A partial transcript of the January 5 segment is below:

CHRIS HAYES: Joining me now, Ezra Klein, editor in chief of Vox.com, MSNBC policy analyst. So, Ezra, I think what is driving people's ideas about the political season taking shape or even the next Congress has to do with kind of the last political moment we had, which was this moment of, like, dyspeptic bad mood. And I think there's a genuine chance the trajectory continues in such a direction we're dealing with just entirely new terrain economically by the time 2016 rolls around. 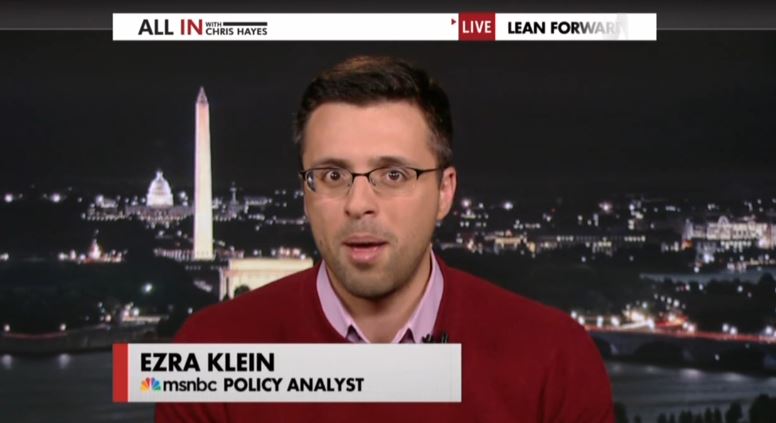 EZRA KLEIN: I think the bad mood in politics is going to remain believe pretty powerful. But I agree with what you're saying about the Obama administration. I think another way to think about this is actually to go back to 2012 and think about what Mitt Romney was promising to do. Prior to Romney winning the nomination, Michele Bachmann was talking about $2 a gallon gas. People laughed at her. I laughed at that. It seemed completely impossible at the time. Mitt Romney talked about, I believe, it was 4 percent growth he was looking to get. We're now at 5 percent annualized growth as of last quarter. We'll see what the entire year looks like when we get there. He was talking about getting unemployment under 6 percent.

HAYES: Paul Krugman had a column about this, about the degree to which we sort of assign credit or blame for the economy to the person in office. But we do know from research, right, from the political science literature, is that presidents are, particularly in re-election years and in election years of a new president in terms of the incumbent party, that's the standard that they're judged by whether fairly or not, and that's what totally orders the political terrain upon which the battle is waged.

KLEIN: If this was one year from today, if this were 2016, Hillary Clinton would be about to carry 42  -- or not about. But we'd be a ways away from the election -- But if it continued on, Hillary Clinton would be looking to carry 42 states, right? If you can have this kind of economy, whoever is coming out of the incumbent party, the party that is going to get credit, as you say, that is the President's party, they get everything. The blip in that political science research, right, if you're Hillary Clinton strategist, what you're terrified of is the economy peaking too soon.

KLEIN: So, there is -- if it continues, Clinton is in great shape, but it could turn around at some point.

HAYES: And having lived through the crisis, which now sort of remarkably is six years ago, but having lived through it, you always feel a little bit like you're standing only the bow of the Titanic, right? Which is what is the iceberg that we're not seeing. Today, you know, there's worries about Greece. There's worries that oil price go too low, that you have financial instability in Russia.