The women of The View returned on Monday to reminisce about the legacy of the late Mario Cuomo and to praise the "smoking hot" Cuomo family. Rosie O'Donnell, mourned the death of the liberal New York governor: "It feels like the end of an era, Right? Like when the Kennedys gone and Tip O'Neill. He was part of the kind of group of Democrats that gave everybody hope. Right?" (Does Barack Obama no longer give O'Donnell hope?)

Actress and guest Tracey Wigfield (30 Rock, The Mindy Project) described son Andrew Cuomo as "smoking hot." She enthused, "And Chris Cuomo on 20/20. Let's not forget about him." (Cuomo actually hasn't been on 20/20 or ABC since February 2013. He's currently an anchor on CNN.)

After playing a clip of Mario Cuomo assailing Ronald Reagan over income inequality at the 1984 convention, O'Donnell lectured, "But it still resonant what he's saying today. Yeah. Isn't that crazy?" 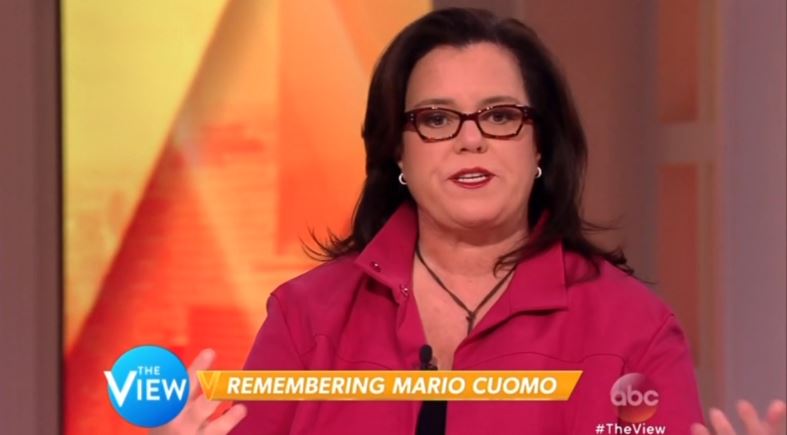 ROSIE O'DONNELL: Very sad news. Former Governor Mario Cuomo passed away at 82 years old. And he became a superstar in the Democratic Party for going after President Reagan at the 1984 Democratic convention. We have a little piece of his speech. Take a look.

MARIO CUOMO: Mr. President, if you ask a woman who had been denied the help she needed to feed her children because you said you needed the money for a tax break for a millionaire or for a missile we couldn't afford to use.

MARGARET CHO (comedienne): He was really one of the good guys. I mean, he was really, really spirited. He really cared about people. 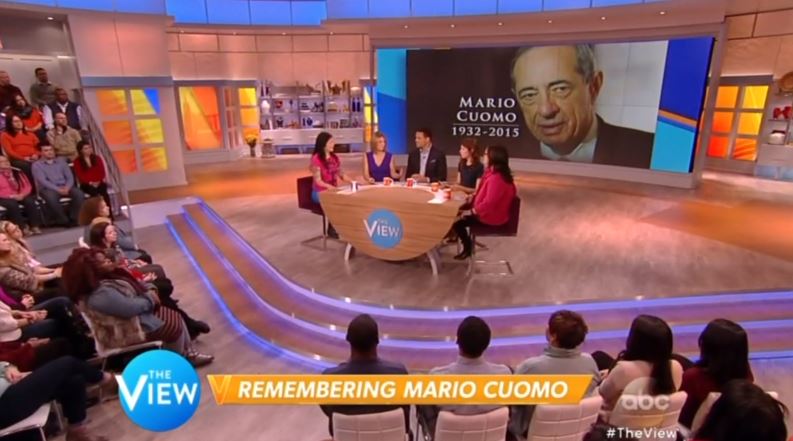 NICOLLE WALLACE: His son, obviously, is the governor of our state of New York.

TRACEY WIGFIELD (actress/writer): And smoking hot. Chris Cuomo on 20/20. Let's not forget about him.

O'DONNELL: It feels like the end of an era, Right? Like when the Kennedys gone and Tip O'Neill. He was part of the kind of group of Democrats that gave everybody hope. Right?

WALLACE: Well, I think even if you're on the other side, you could appreciate a family that was so devoted to service, that, you know, their children saw their father serve and decided to serve. So, even f you don't agree with him, you on nor and respect a spirit of public service that transcends generations.

WINGFIELD: You watch that Obama speech, man, there's so much that rings the same. There's so many parallels between that 1984 speech all about the wealth gap and we're all kind of one and, you know, the poorest people's problems are our problems.