According to MSNBC, as long as you tout left-wing talking points, it doesn't matter what kind of conspiracy theories you subscribe to. Ronan Farrow on Wednesday hyped the "fascinating" views of Jesse Ventura on Wednesday, including his opposition to building the Keystone pipeline. [MP3 audio here.]

Farrow delicately ignored Ventura's long-standing embrace of 9/11 trutherism, his support for the idea that the CIA (or LBJ) killed John F. Kenedy and his contention that American citizens are about to be rounded up in prison camps. Instead, regarding Keystone, Farrow enthused over the former Minnesota's "strong take" on the Keystone vote, adding, "I'm actually fascinated to hear [this]."

On the subject of Keystone, Ventura railed, "I hope [the efforts to get it build] fail because the first thing, for me, is why aren't we leading forward in alternative energy?" 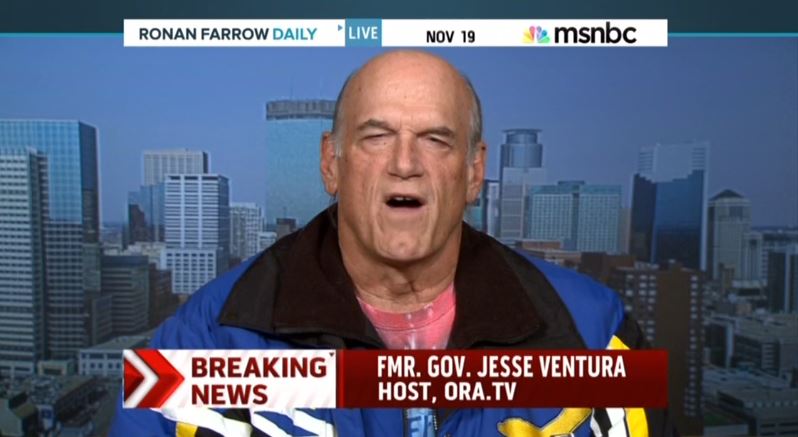 During that answer, the conspiracy theorist offered a possible allusion to his belief that 9/11 was an inside job and that a missile hit the Pentagon. While discussing the impact of building the pipeline, he sarcastically mocked, "They've [the government[ got us all living in fear that terrorism's going to get us and there's a terrorist behind every tree."

Farrow ignored this potentially tricky subject and politely steered the conversation back to standard liberal talking points: "I think one interesting point you made there is this has as a potential diversion from the push of alternative energy sources."

MSNBC hosts, such as Chris Matthews, have been obsessed with the birther conspiracy theory – and of mocking Republicans for any association with it. But apparently Ventura's bull embrace of numerous conspiracy theories is just fine.

Oddly enough, it was Ronan Farrow in March of 2014 who sounded like a birther. Reporting from Kenya, he said of Obama: "But out in the wide world, there is one place he can always call home."

A transcript of the November 19 Ronan Farrow Daily segment is below: 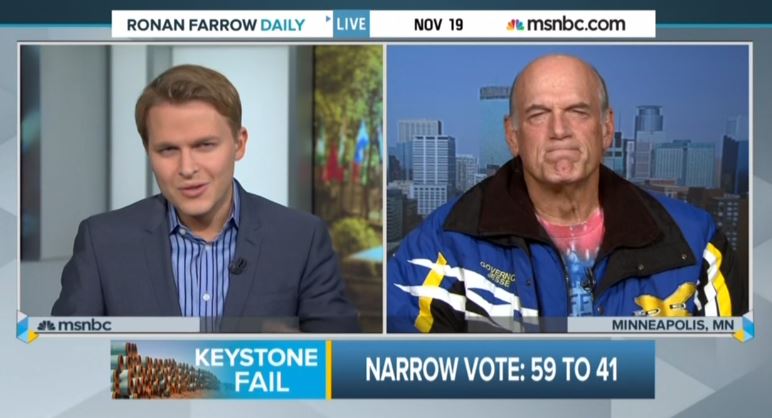 RONAN FARROW: Republicans, today, vowing to fight for that keystone pipeline bill to be quickly resurrected.

MITCH MCCONNELL: This will be an early item on the agenda in the next Congress. And I'm very confident that Senator Hogan's bill will succeed and we'll be able to get it down to the President.

FARROW: Mitch McConnell kicking off those calls for a resurrection early after last night, the bill fell one vote short of the 60 it needed to pass the senate. Fourteen Democrats joined all 45 republicans in voting for the pipeline, 59-41.

SENATOR MARY LANDRIEU: There's no blame. There's only joy in the fight. Where I come from, we just never talk about quitting.

FARROW: Joining me now, an interesting and unexpected voice on this, Jesse Ventura, former governor of Minnesota and host of Off the Grid on Ora TV. Thanks for coming back on the program, sir. Governor, before we get into this Keystone vote, and I know you've got a strong take on this, which I'm actually fascinated to hear, I want to get your reaction to the executive action on immigration that the President is now starting to roll out.

JESSE VENTURA: Well, you know, it's interesting because it's whoever doesn't have the presidency always cries foul on executive orders. I believe Ronald Reagan and George Bush, both Republicans, signed executive orders dealing with immigration during their times in office. So it's nothing new. Now, if they're saying the President's going too far or whatever it might be, well, that's the system and then they need to correct the system in some manner, but that'll take time to do so in which to do so, in which to do it. But it's all political to me. Because one side cries foul when the other side does it. And then, they're hypocrites, because when they do it, it's perfectly fine.

FARROW: Well, one thing's for sure, this fight is nowhere near ending on immigration. We'll be keeping tabs on that. But on this Keystone vote, you as a former state official have navigated some of these thorny economic versus environmental issues. What's your reaction to this vote?

VENTURA: Well, I'm -- I hope it fails because the first thing, for me, is why aren't we leading forward in alternative energy? The United States doesn't lead anymore, we follow. We should be the country that gets -- that is looking beyond old oil and looking to alternative energy methods and be going out and getting them. Oil? Why do they need a pipeline from Canada to the gulf? Well, because British Columbia wouldn't allow it. There's plenty of oil in the gulf. Talk to British Petroleum, they spilled a bunch down there. It's only being taken down there so they can put it on ships and sell it throughout the world. Be it China or whoever the highest bidders and buyers are. We -- now, let's look at it from a security standpoint. Isn't this a natural target? They've got us all living in fear that terrorism's going to get us and there's a terrorist behind every tree. Well, wouldn't this be a natural target? This big old pipeline of oil that is allegedly going to dissect our whole country? Things to think about, aren't they?

FARROW: They are definitely things to think about. I think one interesting point you made there is this has as a potential diversion from the push of alternative energy sources. When you look at the political landscape right now, what are the strongest voices actually calling for that kind of an investment in alternative energy on either side of the aisle?

VENTURA: I don't. Because they're all bought and sold by the powers to be, the big corporate donors. That's why I've always said the point, the only way you're going to get true change in this country is to stop voting for Democrats and Republicans. But good luck. I did it with great pride this year. But they're going to who pays the freight for them. They talk about this creating jobs. Yeah, it'll create temporary jobs building it. Then where are the jobs? The security to protect it? And is that going to fall on the United States of America to protect this pipeline so the oil companies can profit from it? Or will the oil companies provide their own protection and security through the hiring of Blackwater, things like that. Their own security. Who knows all this stuff? They want to build this. I say, let's quit fighting for oil in the Middle East and take all that money and start developing technology that can take us into the future and wean us off oil.

FARROW: And governor, I think whatever people at home think of Keystone, that message of corporate interest buying and selling a lot of these issues is something resinating with a lot of people right now. Former Minnesota governor Jesse Ventura, always fascinating to get your take on this.