Rachel Maddow: Limbaugh’s ‘Washed Up,’ Obama’s a ‘Centrist,’ and the NRA Is ‘Embarrassing’ 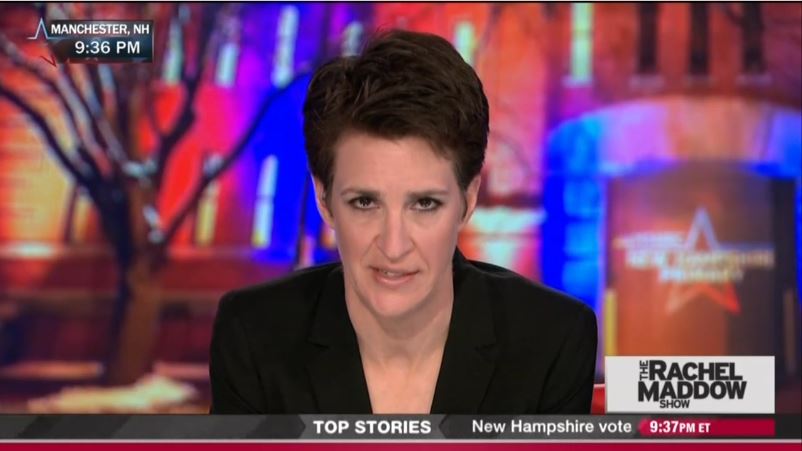 Playboy has jettisoned the nudity, but the Interview remains, and its subject in the new issue is MSNBC’s Rachel Maddow, who discusses topics including her fondness for the music of Thelonious Monk; the recipe for a cocktail called an Aviation; and (mostly) politics.

Maddow declares that she’ll never run for office and says an imaginary Maddow presidency would consist of her “getting sworn in and handing it over to my vice president, Amy Klobuchar, before immediately resigning.” Other highlights (bolding added):

-- On Obama’s domestic policy: “Obama will go down as one of the more consequential and good presidents in American history, mostly because of what he did with what he was handed. Recovering from the Great Recession alone made me glad Paul Ryan wasn’t in the vice president’s office trying to make economic policy and going, ‘Hey, we’ve got to cut taxes for the rich!’”

-- On Obama’s foreign policy: “The closest we got to an Obama doctrine was what Secretary Clinton articulated in the first term, which was that we’re going to remake the world diplomatically. We’re going to up our soft-power capability…That didn’t work. Partly it’s because Obama wasn’t a progressive. He was a centrist. We need an aggressive progressive national security agenda.”

-- On the GOP: “It’s fascinating how Republicans pick their candidates. Honestly, I think the Republican Party’s voters are drunk. I’m sure they’re having a great time and they feel euphoric, but you can’t eat a ton of greasy food and not feel terrible in the morning. I mean, Ben Carson!”

-- On Bernie Sanders: “That sort of economic populism is a tough sell. The diagnosis is right; the cure isn’t easy. My prediction for Bernie: populist hero forever but hard to imagine him still being there at the convention.”

-- On the NRA: “As recently as the Bill Clinton era and even after, in the George W. Bush era, a considerable number of Democrats used to compete on the basis of their good standing with the NRA. Democrats now compete on the basis of who is the most aggressive against the NRA…I think Wayne LaPierre made them into an embarrassing organization that no Democrat wants to be a part of now. That’s really going to hurt them, but it will require raw Democratic political power. If the Democrats use their political might in the 2016 election, within four years the NRA could be effectively dead in terms of strangle-holding those federal issues.”

-- On conservative media: “The commentary industry on the right makes zillionaires out of these people. That gives them tons of incentive to be outrageous and provocative. Watch Rush Limbaugh, who is really washed up at this point as a radio host. He’s been around too long and he says too many of the same things. But every once in a while he makes a calculated decision to say something to get himself in trouble. It’s his little cry for attention. He trolls everybody, everybody’s outraged, and people pay attention to him for another week. Then he disappears again…

“If you tell people, ‘Don’t listen to anybody else. You can trust only me. Everybody else is out to get you,’ not only do you get them to listen to you, but you get them to listen to you exclusively. That’s how Fox News is so dominant in cable news. It’s not that a majority of the country watches it. It’s just that it has locked up all the conservative audience. Frankly, that creates real problems for conservative politicians in that their feedback loop is closed in terms of outside information and which stories are relevant, including understanding how their rhetoric is going to be heard…We on the left have never made that case: Don’t watch anybody else, or everybody else is terrible and part of a conspiracy and lying to you and against you. Maybe we should have.”