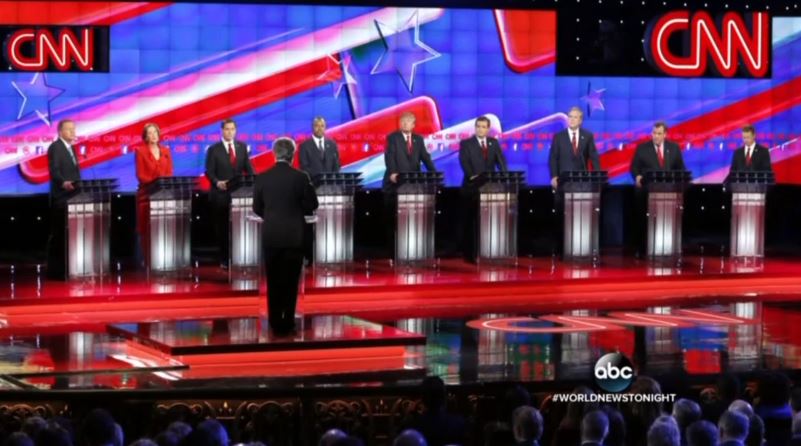 Many of the lefty writers who analyzed Tuesday night’s Republican presidential debate at the Venetian suggested that had the event been promoted as if it were a Vegas show, the marquee might have read “Fright Night,” or perhaps “Be Afraid…Be Very Afraid.”

The New Republic’s Jeet Heer claimed that while conservatives scoff at student demands for so-called safe spaces, they like the concept when it comes to sealing themselves off from jihadists:

The Republicans might consider themselves as the party of freedom, but their true identity, as Tuesday night’s debate made clear, is the party of fear…

The best articulation of this culture of fear…can be seen in the 1 percent doctrine as articulated by Vice President Dick Cheney…In effect, Cheney was calling for the United States to become one giant safe space, even if it meant massively overreacting to threats abroad.

Heer stated that hyping concerns about terrorism has worked before for the GOP: “With both academia and journalism cowed, the years after 9/11 were a golden age for Republicans, when they were able to push a large part of their agenda, not just in foreign policy but often domestically as well. So it’s no surprise that Republicans keep returning to the well: Stirring up anxiety in the electorate has been so profitable for them.”

[T]he first half of the debate was roiled by repeated invocations of fear, the celebration of fear, the demand that people feel and react to their fear. This was logically joined to hyperbolic and ridiculous claims about ISIS…

Politically, the GOP has an interest in whipping up this kind of hysteria. But a substantial number of people in this country also clearly need this fantasy vision of a great clash between good and evil which is in its own way only slightly less apocalyptic and unhinged than the philosophy of ISIS itself. We hear these slogans again and again about World War III and the rest. So we become acclimated to them. But they are really quite nuts. We've somehow been transported back a decade, zeroed in on the small magazine and blog right wing fever swamp of 'Islamofascism' and World War III. But now that's the mainstream GOP.

Amanda Marcotte of Salon opined that amidst all the fearmongering and warmongering, Republicans also smuggled in some sexism:

The candidates didn’t even bother to conceal their glee at having an opportunity to play at being caveman, bragging about how they were going to beat their vaguely defined enemies with very big sticks.

Terrorism isn’t just an excuse to let the war braggadocio out, though. Being big caveman also means giving up the pretense that you think women are equal. Wallowing in retrograde fantasies of masculine toughness and feminine weakness was the order of the night, for both politicians and pundits. If any of you feminists dare say boo about it, they will no doubt be happy to remind you that this is WWIII we’re facing. No time for your fancy ideas about women’s equality when there’s a war going on!

As for the night’s winners, Dylan Matthews of Vox picked both Ted Cruz (who “promised an ‘America first’ foreign policy, in a hopefully unintentional echo of the Charles Lindbergh–backed, Germany-sympathetic anti-war movement in the late 1930s and early 1940s”) and Hillary Clinton, since GOP frontrunners Cruz and Donald Trump “are extremely potent boogeymen to get base Democrats enraged/energized…When Trump and Cruz win a debate, Clinton implicitly wins the debate as well.”

The Washington Monthly’s Nancy LeTourneau asserted that Tuesday night’s “real winner” was ISIS, which “got an awful lot of air time…One can imagine ISIS members erupting into a standing ovation at being elevated to that level of threat from a Republican presidential candidate and a debate focused almost entirely on how Americans as so afraid of them.”

I know there are a multitude of inputs into the decision making process for these things - including, of course, ratings - but it's hard to imagine a world in which there were so many "serious" Democratic candidates that any news network planning to broadcast a debate would just shrug its shoulders and say, "oh well, I guess we gotta have two." They'd choose the "top" 5 (however they would decide to choose them) and tell the rest to piss off. Related, most of the candidates would be complete[ly] ignored by the Sunday shows instead of each one getting multiple turns.