Despite relatively recent Associated Press Stylebook changes mandating that elected officials' political party "should be routinely included" in stories about them, the wire service appears to be backsliding.

On Saturday, I noted the wire service's failure – before being shamed into a partial remedy — to tag DC politicians engaged in public anti-Semitic outbursts and conspiracy theories as Democrats. Now it turns out that the AP's Scott Bauer, in a Saturday dispatch, failed to apply the Democratic Party tag to Lena Taylor, a Wisconsin State Senator charged with disorderly conduct in a racially-charged incident at a Milwaukee bank. 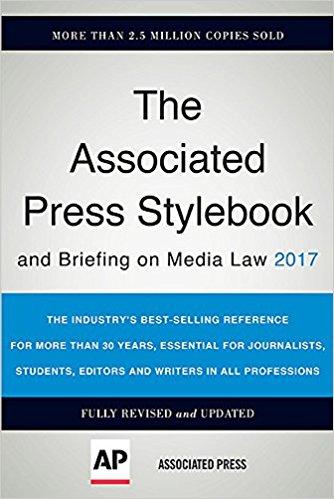 Is the AP Stylebook genuine guidance, or a $22-per-copy exercise in pretense?

Once again, here are the Stylebook rules which became effective in either 2016 or 2017:

A political figure’s party affiliation should be routinely included in stories" (Page 213 of 2017 edition).

There's no wiggle room, especially with any "elected officeholder."

The new guidance should have signified the end of the wire service's decades-long habit of omitting the party of Democrats involved in controversy — particularly egregious examples of AP failures covered at NewsBusters in the past three years are here, here, here, and here — while seldom if ever failing to apply the party tag to Republicans in similar circumstances.

Bauer's report (h/t Powerline) on Lola Taylor's alleged misdeeds missed at least a dozen opportunities to tell readers that she is a Democrat, including four in the first three paragraphs alone (bolded):

State Sen. Lena Taylor used a racial slur against a Milwaukee bank teller and was acting aggressively before being cited for disorderly conduct, according to police reports released Friday.

The reports released to The Associated Press and other news organizations quote multiple witnesses saying they heard Taylor, who is black, call a Wells Fargo bank teller, who is also black, a “good house (N-word).”

Taylor refuted those accounts, telling police she called the teller a “house negro,” the reports said. Police also said they had to step between Taylor and the teller for fear Taylor would “strike out” at her.

Bauer wrote in the final paragraph of his 400-plus word report that "Taylor, 51, has been in the Legislature since 2003" — and still didn't identify her party.

Additionally, Bauer claims that Taylor "refuted" the allegations against her. Based on the definition of "refute" ("to prove to be false or erroneous"), she has not done that. She has only disputed them.

By contrast, the local Milwaukee Journal Sentinel tagged Taylor as a Democrat in the first and second paragraphs of its related May 4 coverage.

The AP's 2018 Stylebook, to be released in June, promises purchasers that "you can learn how to write and edit with the clarity and professionalism for which their writers and editors are famous."

That might conceivably be true if the wire service's reporters consistently followed their own Stylebook's guidance. But they clearly don't.