The political career of California State Senator Leland Yee, a Democrat who had been running for Secretary of State, came to an abrupt end in March 2014 when the strident gun-control advocate was arrested and charged with "six counts of depriving the public of honest services and one count of conspiracy to traffic in guns without a license."

Last week, Yee, who pled guilty last year to "one count of conspiracy to engage in racketeering," begged for a relatively lenient sentence of five years and three months. Yesterday, he got sentenced to five years. Separate Associated Press stories in these two instances each failed to identify Yee as a Democrat.

The AP's February 18 unbylined AP story failed to even name Yee in its headline or first paragraph — thus ensuring that smartphone, tablet and computer users only seeing headlines and teases wouldn't even know the name of the disgraced Democrat:

An attorney for an ex-California state senator convicted of racketeering asked a judge to consider the senator's long history of public service and his wife's illness and sentence him to no more than five years and three months in prison, below the 8-year sentence recommended by prosecutors.

Leland Yee has accepted responsibility for his crime and has otherwise led an exemplary life, his attorney, James Lassart, said in a sentencing memorandum filed Wednesday.

It also did not identify Yee's crimes until the sixth of seven paragraphs, and that it involved helping a leading organized crime figure until the last paragraph: 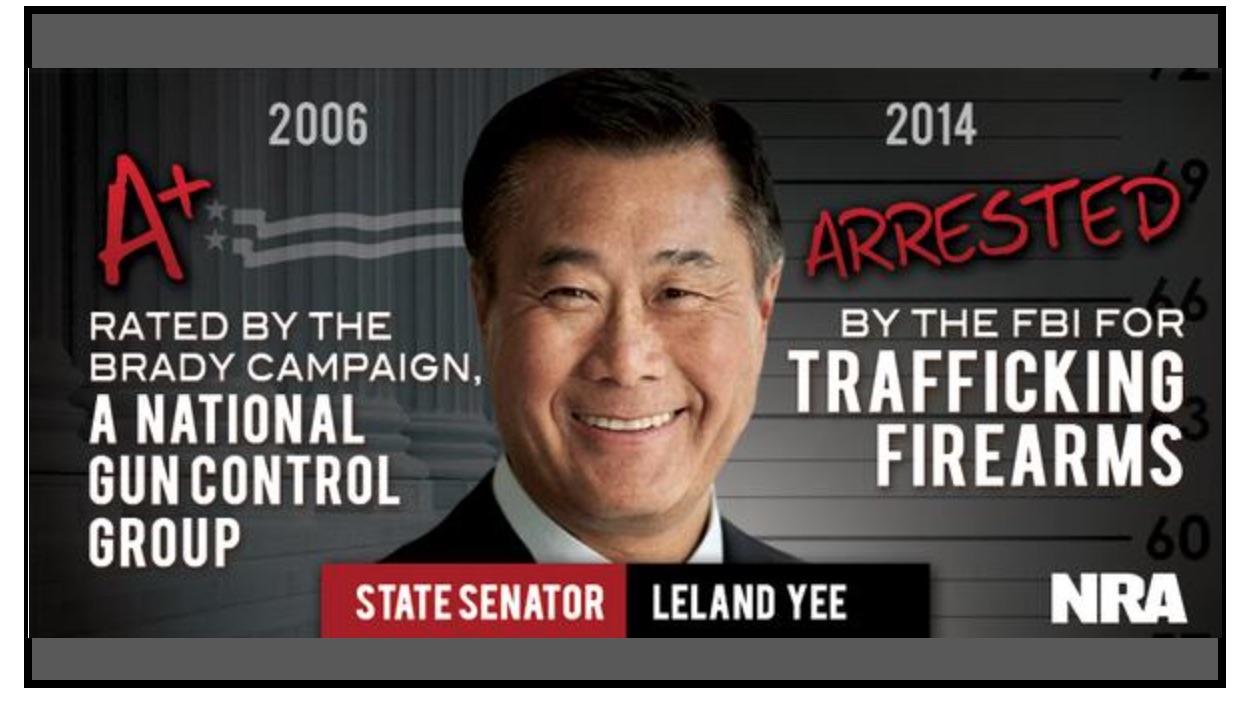 Yee is scheduled to be sentenced on Feb. 24 after pleading guilty in July to one count of conspiracy to engage in racketeering. He was convicted of soliciting and accepting bribes in exchange for providing help from Sacramento and conspiring to import weapons and ammunition into the U.S.

Yee was arrested in 2014 as part of an organized crime probe centered in San Francisco's Chinatown that ensnared Raymond "Shrimp Boy" Chow, the head of the Chinese fraternal organization the Ghee Kung Tong, and others. A jury convicted Chow last month of racketeering, murder and scores of other crimes.

Yesterday's AP story by Sudhin Thanawala did a far better job with the details — except for the one about Yee being a Democrat:

A federal judge sentenced former California state senator Leland Yee on Wednesday to five years in prison after he acknowledged in a plea deal that he accepted thousands of dollars in bribes and discussed helping an undercover FBI agent buy automatic weapons from the Philippines.

Senior District Court Judge Charles Breyer called the weapons allegations against Yee — a gun control advocate —unfathomable and said it was frightening that Yee would be willing to go entirely against his public position on guns in exchange for money.

"I don't feel I should be lenient," Breyer said during the hearing. "The crimes that you committed have resulted in essentially an attack on democratic institutions."

Still, Breyer's sentence fell on the low end of guidelines that called for a prison term of between four years and 9 months and six years.

Prosecutors had recommended an eight-year sentence.

Thanawala was particulary "conscientious" in avoiding a party tag in the story's eighth paragraph:

Yee is a long-time politician who also served in the state Assembly and on the San Francisco Board of Supervisors.

That was Thanawala's most obvious chance to include party affiliation in the story — and, from all appearances, the AP reporter, who has been with the wire service for eight years, consciously refused to do so.

There isn't a chance in Hades that the AP would fail to tag a Republican or conservative with his or her party affiliation, and frequently, in similar circumstances.

Two years ago, CNN took almost two weeks to report on Yee's arrest, and was quite snippy when people complained about its failure to cover it. A more timely AP report on the arrest waited 24 paragraphs to tag him as a Democrat.