On Tuesday, Maine Republican Senator Susan Collins bitterly attacked the press's coverage of her decision to vote for the GOP's tax bill.

Though Collins didn't name a media outlet in her criticism, the New York Times has been the primary purveyor of now-popular leftist memes, which Collins characterized as "unbelievably sexist," that she was "duped" by party leadership, and that she was so hard-hearted that she wasn't "brought to tears" by protesting Mainers who met with her last week.

The Senate passed the tax bill early Wednesday morning by a 51-48 vote.

Times columnist David Leonhardt, who devoted his December 11 syndicated column to the topic, is the most influential purveyor of the "duped" meme.

The Times removed the "(not) brought to tears" claim from its original report only after Collins complained.

As reported by Jacqueline Thomsen at The Hill, here is what Collins had to say about the press's tax bill-related coverage of her (bolds are mine throughout this post): 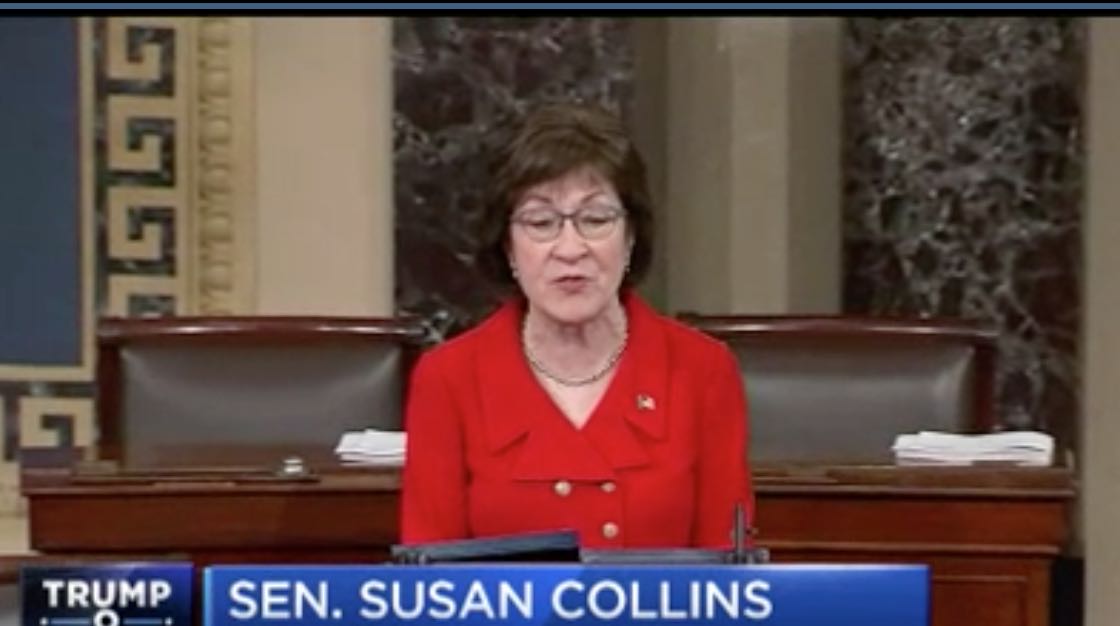 “They’ve ignored everything that I’ve gotten and written story after story about how I’m 'duped.' How am I duped when all your amendments get accepted?”

... Collins agreed to back the tax plan after Senate Majority Leader Mitch McConnell (R-Ky.) promised that the Senate would pass two bills to stabilize ObamaCare, among other things.

She also ripped a report that said Collins “didn’t cry” while meeting with protestors suffering from medical conditions. The line was removed after the senator objected.

“I can’t imagine a reporter writing that about a male senator meeting with the same group, and in fact I have proof because they met with Jeff Flake,” Collins said.

Leonhardt complained in his column that "in exchange for her vote, Collins received, at best, a cosmetic fix that she will have to pretend is something more." Hardly.

On Monday, David Catron at the American Spectator explained the primary reason why Collins voted for the tax bill, which is that the Obamacare individual mandate, which is being repealed, has been especially hard on her state's residents. He also identified other last-minute concessions the Maine senator won:

... Senator Collins plans to vote for the Tax Cuts and Jobs Act when it reaches the Senate floor, probably tomorrow. But Collins is no dupe. Her support for the legislation is clearly the right position for any member of Congress purporting to represent the best interests of Maine’s 1.3 million residents. That the bill repeals Obamacare’s individual mandate is not a betrayal of her constituents, as some have suggested. It will instead remove a significant tax burden that falls disproportionately on the shoulders of Maine voters. ... Mainers pay a larger than average share of the individual mandate’s tax penalty.

... The citizens of Maine are lucky to escape with their shirts once the federal, state, and local governments finish with them.

This is why Senator Collins insisted on an amendment to the tax bill that would permit taxpayers to itemize deductions up to $10,000. ... Collins also extracted an amendment that would reduce the threshold for medical expense deductions from 10 percent to 7.5 percent of gross adjusted income, and a commitment from the Republican leadership to forestall any cuts to Medicare that would be automatically triggered by deficits.

If, after reading the above paragraph, you’re wondering how Collins was “duped,” the answer is that she wasn’t. That tale is nothing more than a propaganda campaign conducted by the Democrats and the media to the effect that the GOP leadership will welsh on their deal. This is, of course, a classic case of projection. It is what the Democrats would do in the same situation to any Republican foolish enough to accept verbal assurances from people like Chuck Schumer.

... (Mitch) McConnell and (Paul) Ryan need Collins too badly to double-cross her. And Collins has constituents in desperate need of relief from the Beltway vampires.

Rappeport's Thursday story on Collins' meeting with protesters still opens by noting that they consciously planned to use "tears" as a strategy:

As a group of progressive activists and constituents prepared for a 15-minute meeting on Wednesday with Senator Susan Collins, Republican of Maine, they sat in the lobby of her office and developed a last-ditch strategy to persuade her to vote against the $1.5 trillion tax bill barreling through Congress: tears.

“If Senator Collins actually saw you as a human, saw me as a human, then she wouldn’t pass any of this,” said Ady Barkan, a member of the Center for Popular Democracy, who recently learned he had amyotrophic lateral sclerosis, or A.L.S., and uses a wheelchair.

Especially after 20 years in the Senate, it seems likely that Collins, like so many other Americans, has tired of the ginned-up, uninformed leftist histrionics which appear whenever any even remotely center-right idea appears to gain traction. Catron at American Spectator says as much: "Democrat intimidation tactics and verbally abusive protesters will only harden her resolve."

It's certainly understandable that Collins objected to Rappeport's now-deleted sexist claim. But we shouldn't forget that it passed editorial muster before it was published, that it was live for almost ten hours before it was removed, and that it's obviously still in the print edition.

At the Times, there is apparently no line of personal attack which is out of bounds if the target is someone with a different opinion.