CNN Plays Up Schumer's Call For Order, Ignores His Lies About the Tax Bill 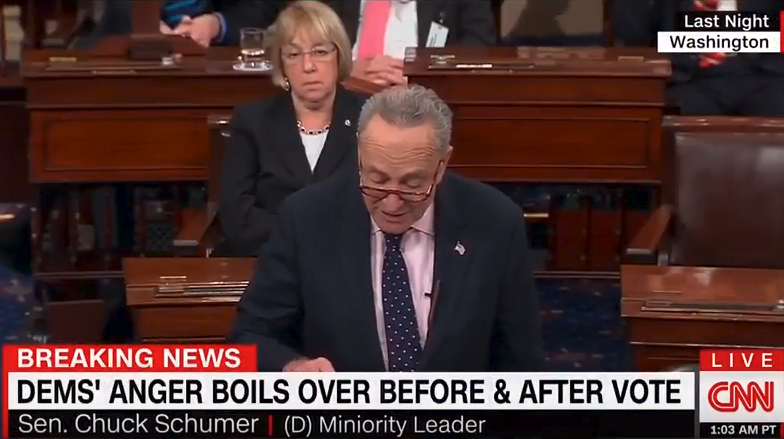 On Tuesday night, Senate Democrat Minority Leader Chuck Schumer got upset because too many other people were allegedly talking while he was making a speech on the Senate floor.

CNN turned Sen. Schumer's complaint into a rude-Republicans moment, and failed to note that the supposed substance of Schumer's speech was a laughable crock.

Schumer tried to act as if he believed that imparting his alleged wisdom at the last minute might stop the law, which got through the Senate in the wee hours Wednesday morning on a strict 51-48 party line vote.

As readers will see in the network's chyron in the video which follows, CNN tried to turn this incident into an example of Republican rudeness generating justifiable "Dems' anger," even though viewers will have a hard time detecting much if any noise from others in Senate as Schumer spoke (HT Washington Free Beacon):

(cut to Schumer speaking on the Senate floor)

SENATOR CHARLES SCHUMER: Nearly 145 million middle-class families under $200,000 will either get tax hikes —

Can we have order, Mr. President?

SENATE "PRESIDENT": The Senate will be in order.

SCHUMER: This is serious stuff. We believe you're messing up America. You could pay attention for a couple of minutes.

Since CNN wasn't up to the task, someone else might want to let Chuck Schumer know that the entire United States had only 82 million families and only 126 million households in 2016.

Subsequent footage not included above indicates that CNN also wasn't up to correcting the first half of Schumer's claim seen in the video about "middle-class families," namely that most of them will "get tax hikes." Even if he ended up adding "or save very little" to his screed, he's wrong. Economic analysts on the left, right and center agree on this.

Guy Benson at Townhall commented on this consensus on Tuesday (links are in original):

... The Democrats' central attack against the GOP tax reform bill is all too familiar:  It's a giveaway to corporations and "the rich" that hurts the middle class.  They've falsely called the plan a tax increase on the middle class, and demagogued it as a "massive attack" on middle income taxpayers -- not to mention the "end of the world."  Throughout this debate, we've shared data-driven analyses from three separate nonpartisan organizations: The Joint Committee on Taxation (JCT), which is an official Congressional scorekeeper, the Tax Foundation (which leans to the right), and the Tax Policy Center or TPC, (which leans to the left).  In spite of the deceptive rhetoric flying around social media and the airwaves, all three outfits agreed that the GOP proposal would, on average, reduce the tax burdens of every income group in America.

We've showcased the TPC findings because that group is typically home to Democrats' preferred experts.  Well, TPC is out with their fresh analysis of the finalized tax bill, and guess what?  As we've been saying for weeks, it will slash taxes for the vast, vast majority of American taxpayers ...

... The average tax cut will be $1,600, according to TPC's data (Republicans cite a different statistic: A tax cut of more than $2,000 for a median income family of four).  Let those numbers marinate for a moment.  We've been caught in a blizzard of misinformation claiming that this bill hurts the middle class.  But even the Republican-hostile Tax Policy Center couldn't escape the empirical conclusion that 80 percent of all Americans will see their taxes reduced under the bill -- and the "losers" are limited to just five percent (largely upper income filers from high-tax blue states).  And no, the "one-percenter" rich do not disproportionately benefit from the cuts ...

Schumer, his partisan colleagues, and the establishment media-assisted Democratic Party noise machine has have been falsely predicting Armageddon any time a center-right idea gains any kind of traction for so long and with such frequency that the nation, and perhaps some Republicans in the Senate who might have been a bit inattentive early Wednesday morning, are simply getting tired of having to listen to it.

Here, via Fox News, are just a few samples of the overwrought, hysterical lies Republicans have had to endure about the tax bill from their Democratic Party counterparts in the past several days:

NANCY PELOSI, HOUSE MINORITY LEADER: This is the worst bill to ever come to the floor of the House, with stiff competition for some of the things they've tried to do. The worst bill in history, because of the number of people it affects, the money it sucks up to the higher incomes —

CHARLES SCHUMER, SENATE MINORITY LEADER: How can Republicans defend this? The only people who want it are their very wealthy paymasters who seem to run the Republican Party these days, and they're running it into the ground.

This over-the-top, end-of-the-world hysteria concerns a bill which, even under static analysis, is forecast to reduce federal government tax collections in fiscal 2018 by a "whopping" 4 percent ($144 billion divided by originally projected receipts of $3.531 trillion), according to the Congressional Budget Office.

As columnist Lance Dutson at the Bangor Daily News observed last week: "No one buys this nonsense anymore."