You had to figure that the Associated Press would at some point finally recognize the existence of the nation's "booming economy," at least compared to the historically weak 7-1/2 years of post-recession malaise which preceded it.

Well, they're finally doing it — and erroneously tagging it with sole blame for the fast-growing homelessness problem in the nation's three West Coast states.

The wire service suddenly rediscovered homelessness in early November when it began a series on West Coast homelessness after a virtual national reporting blackout on the topic during the Obama era. Lo and behold, the "booming economy" put in its first appearance in an AP report in memory on November 8. The report by Janie Har featured a paragraph which directly and bitterly indicted certain of those who have shelter for the plight of those who don't (bolds are mine throughout this post):

... Homeless advocates and city officials say it’s outrageous that in the shadow of a booming tech economy - where young millionaires dine on $15 wood-grilled avocado and think nothing of paying $1,000 for an iPhone X - thousands of families can’t afford a home. Many of the homeless work regular jobs, in some cases serving the very people whose sky-high net worth is the reason housing has become unaffordable for so many.

That's an outrageous smear on the rich. The AP's Har acknowledged the existence of another key factor in a later paragraph:

... along the West Coast ... many cities and counties have seen a surge in the number of people living on the streets over the past two years. Counts taken earlier this year show 168,000 homeless people in California, Oregon and Washington - 20,000 more than were counted just two years ago.

The booming economy, fueled by the tech sector, and decades of under-building have led to an historic shortage of affordable housing. It has upended the stereotypical view of people out on the streets as unemployed: They are retail clerks, plumbers, janitors - even teachers - who go to work, sleep where they can and buy gym memberships for a place to shower.

Florida and Texas have booming economies too, and rich people there also live relatively luxurious lifestyles. Somehow, those states don't have anything resembling the problem with homelessness seen in California, Oregon, and Washington. Why? Because homes and apartments are being built in those states. Har never explored why the three West Coast states have seen "decades of under-building." 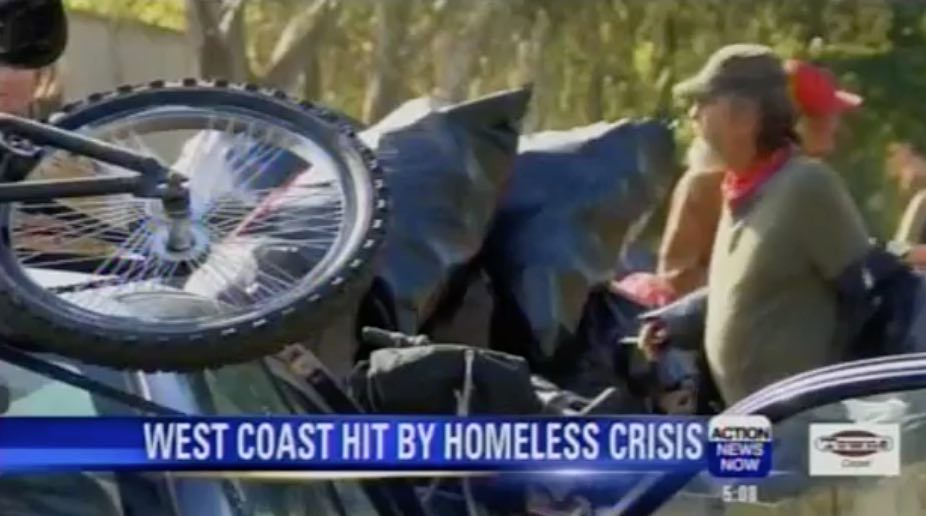 The "booming economy" put in another appearance in a November 9 AP item, again blaming it for homelessness:

Amid booming economy, homelessness soars on US West Coast

A homeless crisis of unprecedented proportions is rocking the West Coast, and its victims are being left behind by the very things that mark the region’s success: soaring housing costs, rock-bottom vacancy rates and a roaring economy that waits for no one. All along the coast, elected officials are scrambling for solutions.

Earlier this week, the U.S. Department of Housing and Urban Development released its Annual Homeless Assessment Report to Congress. Naturally, AP reporters Christopher Weber and Geoff Mulvihill brought up the "booming economy" in their Monday coverage, and blamed it for the West Coast's homelessness problem. They also engaged in a bit of statistical sleight-of-hand which blurred the contrast between the West Coast and the rest of the nation:

The nation’s homeless population increased this year for the first time since 2010, driven by a surge in the number of people living on the streets in Los Angeles and other West Coast cities.

Let's stop there for a moment. The bolded assertion is horribly misleading. The actual point-in-time homelessness counts were done during the last week in January 2017. The vast majority of the increase the reporters cited occurred last year, not "this year." Additionally, except for a very few days, the period covered by the government's report coincided with the final year of Barack Obama's presidency.

The U.S. Department of Housing and Urban Development released its annual Point in Time count Wednesday, a report that showed nearly 554,000 homeless people across the country during local tallies conducted in January. That figure is up nearly 1 percent from 2016.

... Increases are higher in several West Coast cities, where the explosion in homelessness has prompted at least 10 city and county governments to declare states of emergency since 2015.

City officials, homeless advocates and those living on the streets point to a main culprit: the region’s booming economy.

... Excluding the Los Angeles region, total homelessness nationwide would have been down by about 1.5 percent compared with 2016.

The AP pair certainly was justified in concentrating much of their work on the dreadful situation in LA. The city has a breathtaking 10 percent of the entire U.S. homeless population; its rate of homelessness is now higher than former longtime leader New York City. 80 percent of LA's homeless are unsheltered; only about 5 percent are unsheltered in Gotham. They weren't justified in using LA's situation to guilt-shame the rest of the nation. But they did, with the help of LA's mayor:

Since last year, voters in the city and Los Angeles County have passed a pair of tax-boosting ballot initiatives to raise an expected $4.7 billion over the next decade for affordable housing and services for the homeless. HUD Secretary Ben Carson praised the region for dealing with the issue and not relying solely on the federal government.

“We need to move a little bit away from the concept that only the government can solve the problem,” he said.

But Mayor Eric Garcetti said that insufficient federal funding for affordable housing and anti-homelessness programs are part of the reason for the city’s current crisis.

That's rubbish. Unfortunately, the 1.5 percent "other than LA" nationwide reduction cited by Weber and Mulvihill masked how relatively well the country is doing in addressing homelessness. Here's how things look when all of the trouble spots — California, Oregon, Washington State, and New York City — are subtracted from the nationwide totals for the January 2017 and January 2016 counts:

While the rest of the nation made decent headway in reducing homelessness last year, the three West Coast states and New York City, which has had a disproportionately high percentage of the nation's homeless population for decades, saw significant increases.

The AP has very selective in when and where it will call the U.S. economy, or parts of it, "booming."

On November 14, the wire service wouldn't concede that Florida has a booming economy, even though employment in the state has increased by almost 200,000 in the past year and over 1.5 million (an increase of over 21 percent) since the Obama-era jobs recession ended in February 2010. When Governor Rick Scott made that reference to the Sunshine State's economy in unveiling its next budget, reporter Gary Fineout put the word "booming" in quotes.

As to why the three high-homelessness states have seen "decades of under-building":

Finally, all three states have been indifferent or hostile to attracting and keeping the kind of middle-class jobs which used to be plentiful (think: logging in Washington and Oregon, and oil refineries in California).

A column by Steve Lopez at the Los Angeles Times, of all places, which looked at why former Angelenos are migrating to Las Vegas, stated matters succinctly and in a manner which really applies to all three states: "Slowly, steadily, and somewhat indifferently, we are burdening, breaking and even exporting our middle class."