In June of last year, with much national media fanfare, the City of Philadelphia passed a dishonestly named "soda tax."

The levy of 1.5 cents per ounce, which taxes not only sugar-sweetened beverages but also drinks containing "any form of artificial sugar substitute, including stevia, aspartame, sucralose, neotame, acesulfame potassium (Ace-K), saccharin, and advantame" after it took effect on January 1, was supposed to raise over $90 million.

Actual collections are falling far short, and appear to be in decline. The national press is uninterested in reporting this result.

A Monday item in the Philadelphia Business Journal summarizes matters succinctly (bolds are mine throughout this post): 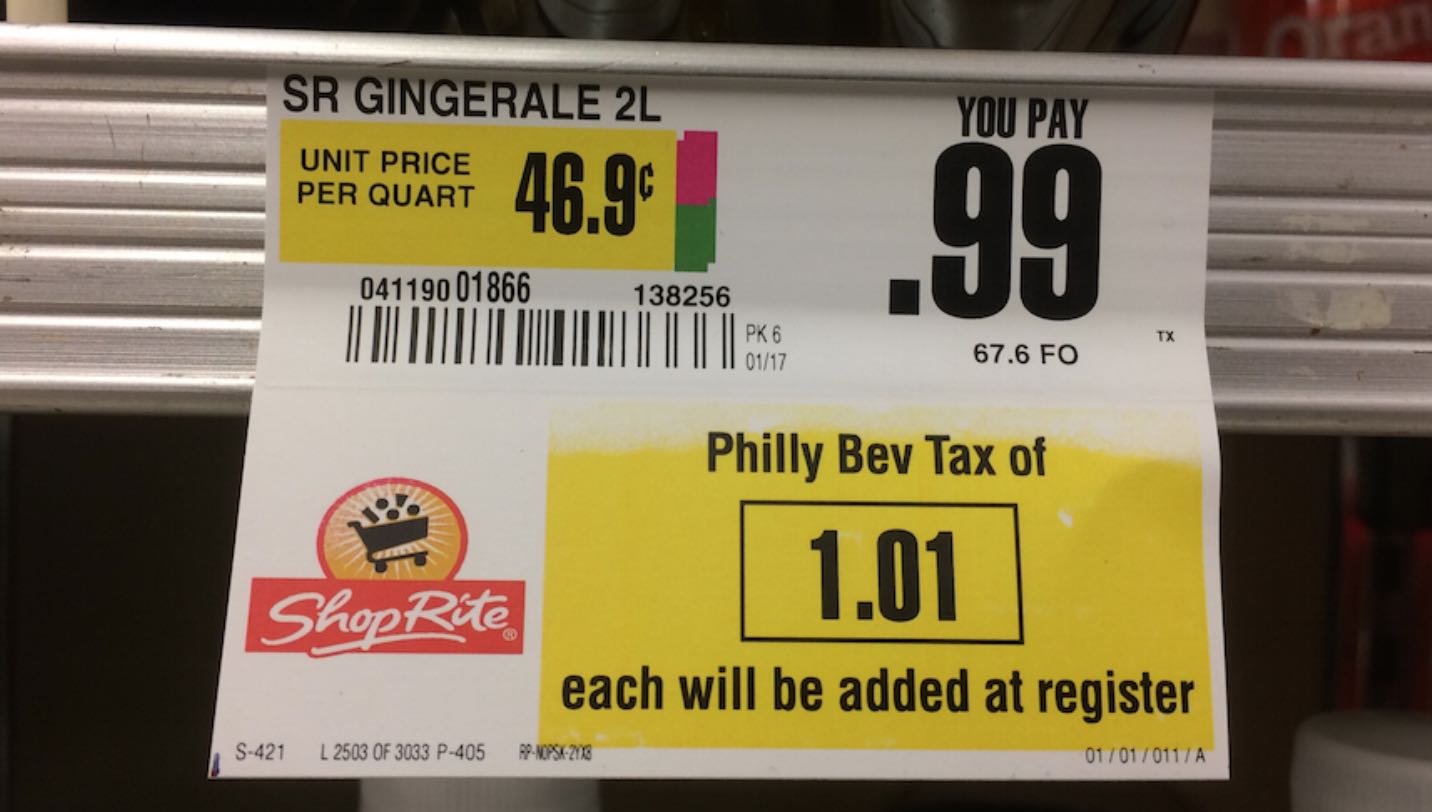 Monthly revenue collected by the city's beverage tax in October was the lowest amount since January, bringing in $6.1 million for Philadelphia's expanded preK, ReBuild and other programs, according to preliminary figures provided by the city.

That's $1 million less than the Philadelphia Beverage Tax drew in September and puts October's monthly revenue for the controversial tax only ahead of January's figure of $5.9 million.

(Opponents are) saying the so-called soda tax will be unable to bring in the projected $92 million in yearly revenue since it has yet to hit $7.7 million in a single month.

... For soda tax revenue to reach the yearly estimate in its first year of implementation, it would need to draw another $25.8 million in November and December, meaning each month would need to generate more than double October's revenue.

Well, that's not going to happen, so it's time for proponents to lower the bar:

Robert Inman, an economist with University of Pennsylvania's Wharton School previously told the Business Journal that getting within "85 to 90 percent of projections" would be a success for most any new tax, especially the beverage tax, which had little history for the Kenney Administration to use for its own estimates.

Based off Inman's percentages, yearly PBT revenue of $78.2 million would be enough.

The city based its funding of "pre-K schooling; community schools; rec centers, libraries and parks" this year on achieving the originally projected level of collections, which was actually $95 millions, and was supposedly (cough, cough) conservative:

The (Jim Kenney) administration based its estimates on studies by The Rudd Center at the University of Connecticut, which account for declining consumption of sugary drinks as the cost rises due to the tax. The Inquirer’s editorial board said that it believes the estimates are “thorough and conservative.”

Coming up roughly 10 percent to 15 percent short is not good enough — unless the city plans on raiding general funds to make up the difference.

That's especially the case because the tax law which was passed a year ago did not contain a hardwired mandate that the money be spent on the programs just mentioned.

The city's related website claims that "In fiscal year 2021, which begins July 2020, 99 percent of the revenue will go toward those programs." That's nice (if even true), but that's almost three years from now. What kind of mischief will occur in the meantime? The answer is "a lot."

As so often happens when there's a pot of money and politicians nearby, the funds have been raided for other things. As a result, as of now, "nearly 20 percent of the money raised would go to other city programs and employee benefits." In August, a column at the Philadelphia Inquirer claimed, based on Tax Foundation research, that "only 49 percent of the funding (this year) actually is slated for pre-K," the primary justification for the tax.

In June of this year, the city's outgoing controller warned that collections shortfalls "are potentially creating a multi-million dollar burden on the city in order to pay for" the programs noted above. No kidding.

Meanwhile, the completely predictable negative economic effects are piling up. Beverage sales were projected to decline by 30 percent. In the early months, it was more like "30 percent to 50 percent," and even the city's original rosy projections estimated slight collection declines in future years. Many Philly residents who are going outside of the city to buy their pop are also buying their groceries while doing so. Within just two months of the tax's implementation, Pepsi and Canada Dry laid off employees, while a major grocer said "he has had to cut 6,000 employee hours," i.e., the equivalent of 150 full-time employees,  and suspected that "he will lose about 300 people."

And let's stop kidding ourselves that there's any kind of health benefit from the tax: "Despite eager claims from soda tax proponents, the impact on obesity is measurably zero in all cases."

Of the roughly 20 items returned in a Google News search during the past month on "soda tax Philadelphia" (not in quotes) at 7:45 p.m. Eastern Time on Wednesday, only a few were outside of the Philly Metro area or Pennsylvania, and none were from national establishment press outlets.

One of those outliers links to an Arizona TV station's report that "Arizonans would favor a 2-cent per ounce tax on soda that could raise roughly $660 million annually, but only if all the money went directly to education." If such an effort becomes law, it will largely because the press hasn't made it obvious what miserable failures existing soda taxes have been.