At CNN, disgraceful journalism has become so routine that we now expect it to be the rule rather the exception.

Even in that context, Daniel Shane's claim at the networks CNNMoney website, manufactured with selective editing, that President Donald Trump doesn't know that Japanese companies already build cars in the U.S., is especially risible.

Here is the full context of what Trump said at the U.S. Ambassador's residence in Tokyo on Monday (bolds are mine throughout this post):

I also want to recognize the business leaders in the room whose confidence in the United States -- they've been creating jobs -- you have such confidence in the United States, and you've been creating jobs for our country for a long, long time. Several Japanese automobile industry firms have been really doing a job. And we love it when you build cars -- if you're a Japanese firm, we love it -- try building your cars in the United States instead of shipping them over. Is that possible to ask? That's not rude. Is that rude? I don't think so. (Laughter.) If you could build them. But I must say, Toyota and Mazda -- where are you? Are you here, anybody? Toyota? Mazda? I thought so. Oh, I thought that was you. That's big stuff. Congratulations. Come on, let me shake your hand. (Applause.) They're going to invest $1.6 billion in building a new manufacturing plant, which will create as many as 4,000 new jobs in the United States. Thank you very much. Appreciate it. (Applause.)

The bolded passages indicate that Trump knows that Japanese companies, primarily its automakers, have been creating jobs and building cars in the U.S. for decades, and that he's grateful for the Toyota-Mazda investment he mentioned. 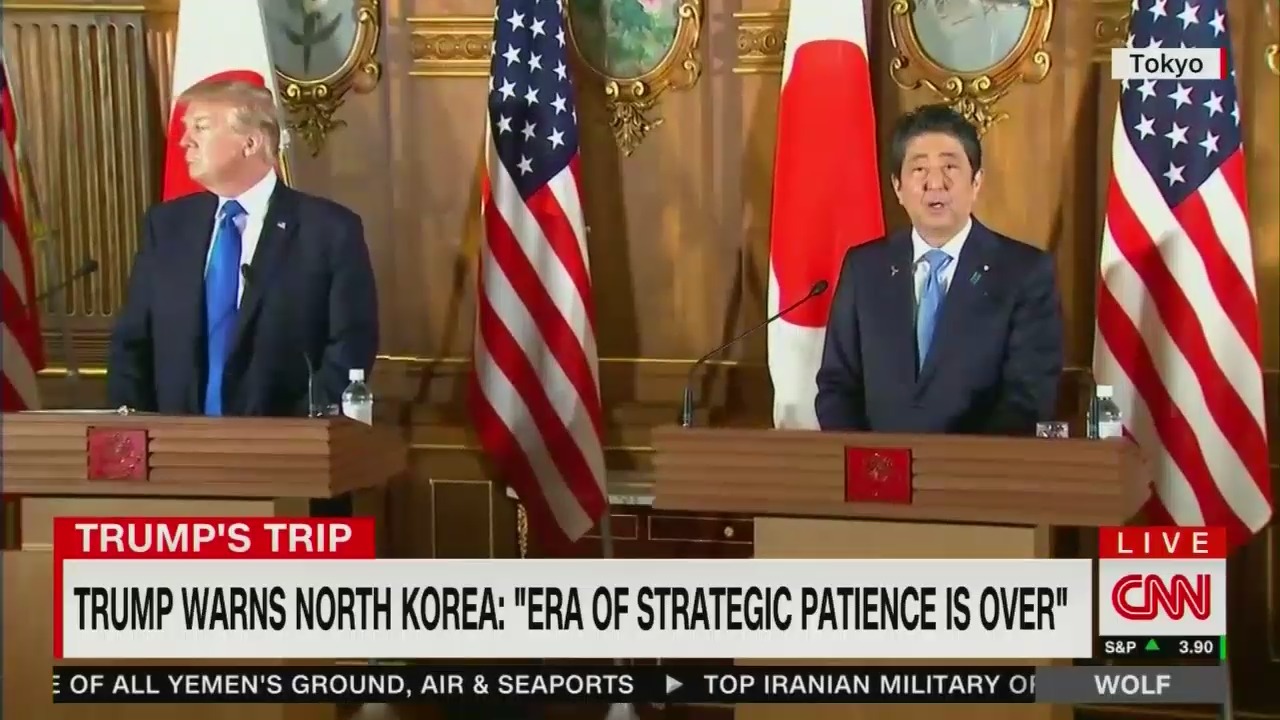 "Try building your cars in the United States instead of shipping them over. Is that possible to ask? That's not rude. Is that rude? I don't think so," Trump told executives from automakers including Toyota and Mazda during a trip to Japan on Monday.

Japanese automakers, however, already have huge factories in the U.S. that churn out millions of cars each year.

Shane updated his report at 9:31 a.m. Eastern Time to mention the Toyota-Mazda investment, inserting the following paragraphs after the first two seen above:

Trump, who went on to praise Toyota (TM) and Mazda (MZDAF) for planning a new $1.6 billion manufacturing plant in the U.S., has made reducing the $57 billion trade deficit with Japan a top priority.

But Japanese automakers have been increasing their investment in the U.S. for decades.

As of 3:15 p.m., Shane still had not acknowledged Trump's obvious knowledge of Japan's decades of car making in the U.S., and had not changed his headline. Electronic device users who see the item's headline and nothing else are being misled into believing that Trump is an insufferably ignorant dummy about something most people already know. CNN and Shane are clearly okay with that.

Additionally, thanks to Shane's shameful writeup, CNN-subscribing outlets are carrying his headlined lie (CNN is a wire service like the Associated Press, only much smaller), and writers at Slate, Forbes.com, and elsewhere have opportunistically pounced.

CNN's deliberate distortion of the truth — it is deliberate, because surely the network and Shane himself have been informed of the full context of Trump's statement by now — is so bad that even Aaron Blake at the deeply Trump-despising Washington Post has criticized it:

Stop cherry-picking that Trump quote about Japanese cars. It’s not what you think.

... A look at this fuller remarks makes clear he did know that Japanese cars are built in the United States. He even talked about it at-length and praised the manufacturers for the amount of jobs they've created here.

... Even if you isolate that one quote, it could be read simply as a plea for Japan to build more cars in the United States, which it seems is exactly what Trump meant.

Trump says plenty of things that are false or that belie a lack of familiarity with the subject at-hand. But spotlighting this quote as evidence of the latter is extremely uncharitable.

Daniel Shane has made a complete mockery of the network's "Facts First" campaign. As always, it's really "Fake News First."