Leftist Threats Force Dana Loesch to Move Her Family; Ex-CNNer Piers Morgan Is OK With That

When they're not ignoring these matters completely, the press only usually only reluctantly notices when conservative business owners and public figures are harassed, threatened, have their property destroyed, and are sometimes even physically harmed.

Beyond that, some press members seem to and sometimes actually act as if the victims should know, understand and accept that this kind of treatment comes with the territory when one expresses views that offend leftist sensibilities.

On Friday, Morgan posted a tweet which effectively contended that Dana Loesch deserved the threats she received after narrating a strongly worded video as that group's spokesperson. The threats directed at Loesch were so violent and specific that she felt compelled to move herself and her family to another home.

Sometimes, supposedly responsible leftist journalists even consider the personal life-impacting results of far-left threats and violence just desserts the victim or victims had coming. Piers Morgan is one such journalist.

A week ago, Loesch, who has been a conservative activist since the dawn of the Tea Party movement, revealed that she had been forced to move herself and her family, i.e., effectively "close down" her involvement in her immediate neighborhood and community, and move to another, after she received a high volume of very specific and violent threats from people who made it clear that they knew where she lived and were intent in killing her.

As a result of threats received following the appearance of this video, Cheryl Chumley at the Washington Times reported the following (links are in original):

Dana Loesch, familiar face of Second Amendment activism, says she’s been driven from her home, forced to move, because lunatics on the left have threatened — repeatedly — to harm her.

“One guy hunted down my private cell phone number, called when police were here, threatened to shoot me in my front yard,” the National Rifle Association spokesperson tweeted over the weekend, as noted by Fox News.

Another tweet: “Another guy created a string of social media accounts, posted photos of my house, threatened to rape me to death.”

Oh, how nice. This is the fringe left — the same that thinks it’s OK to express political disappointments with a baseball (bat) ... and Molotov cocktail. 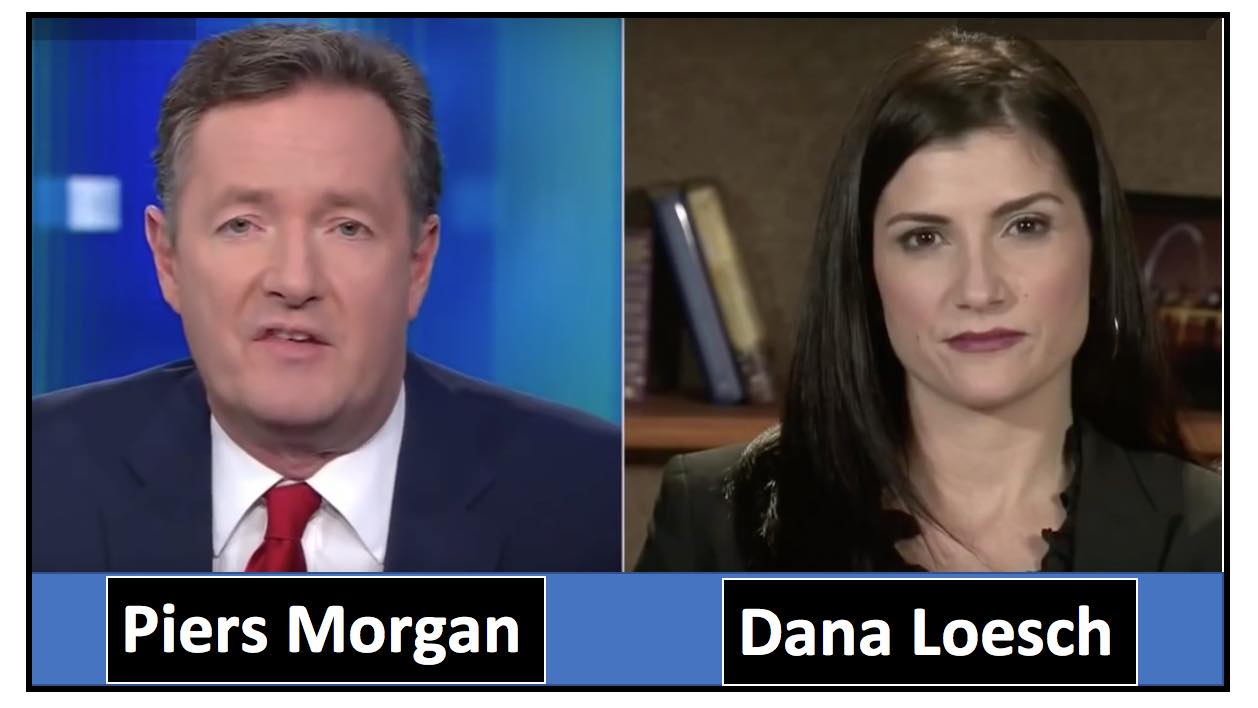 But is it really just "the fringe left"?

Piers Morgan's history at NewsBusters shows that he has many far-left opinions, but has also rebuked the media for its over-the-top criticisms of Trump and its failure to cover genocide against Christians in some Middle Eastern countries. Of course he's entitled to his opinions, however loopy they may be.

But, as seen in the following tweets, Morgan's blind spot on Second Amendment rights and perhaps his personal hostility towards Loesch herself (he banned her from his CNN show for almost eight months in 2013-2014) clearly caused him to lose the self-control we have a right to expect from a responsible media member — or for that matter, any responsible adult. After starting with immature name-calling, Morgan graduated to effectively saying that Loesch's forced move was a deserved punishment (red underlines are mine):

Loesch's video does not make any violent threats. It does aggressively promise to defeat the NRA's and civility's enemies in the political realm. Any other interpretation of her final statement — that, thanks to the far left and even mainstream Democrats' violent tactics and rhetoric, "they will perish in the political flames of their own fires" — is willful distortion.

A review of Morgan's Twitter feed shortly after the tweets above shows no signs of remorse. Frankly, even if he has apologized or eventually does apologize, it would or will be hard to accept its authenticity, given that this is a 52-year old man with decades of experience in journalism and life who should know better as a supposedly decent human being to express such a sentiment in the first place.

And even if he has apologized or eventually does, Morgan has effectively encouraged the unhinged left and the "antifas" by seeming to give them authoritative permission to continue doing what they've been doing. Morgan can disagree with this take all he wants, but what he's really saying is, "I'm okay with what you guys out there are doing to those gun-rights nuts. I have no problem with your continuing to do that when they get out of line."

Additionally, how this has played out works to the hard-left's advantage by intimidating others from daring to express non-politically correct observations and opinions, especially if they have spouses, relatives, and children they need to protect.

It would appear that Piers Morgan is okay with that too.

A Google News search on Loesch's full name in quotes at 8 p.m. Monday evening Eastern time returned only about 20 relevant items. Of them, only two items at The Hill and a column at HuffPost expressing outrage at Loesch's situation qualified as coming from establishment press or leftist news sources. The New York Times has not posted a story on the threats to Loesch. I also could not find any related items at the APnews.com, the primary website of the Associated Press. But as I noted on Sunday, that site's search engine is so poorly designed that it only searches on headlines and tags, which proves nothing about the presence or absence of a search term in an article's content.