AP: Hurricane Katrina Was 'A Prime Example of Urban Inequality and Environmental Injustice' 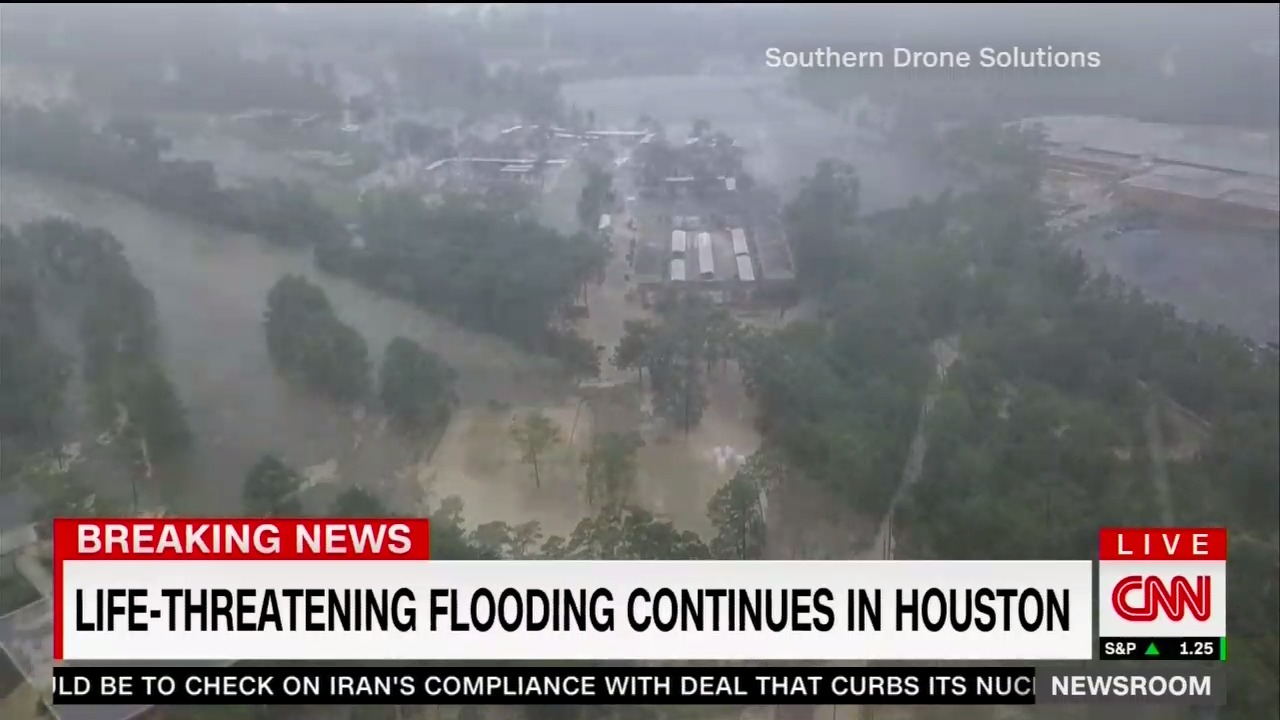 The Associated Press couldn't keep race and income out of its coverage of Hurricane Harvey and Houston's recovery from it.

Those angles were wholly predictable and tiresome, but the wire service's Juliet Linderman also decided she would tell readers what the establishment press has from all appearances unilaterally and falsely decided should be the conventional wisdom for all time about the impact of Hurricane Katrina in 2005, namely that it "stands as a prime example of urban inequality and environmental injustice." Horse manure.

Linderman and the headline which accompanied her Saturday evening report seemed almost surprised that Harvey's flood waters and high winds obeyed obeyed the laws of physics and gravity without exclusively seeking out poor and minority victims, and almost pleased that those natural forces didn't care if they were about to about to flood or destroy homes of rich, middle-class and/or white people (bolds are mine throughout this post:

Harvey did not discriminate in its destruction.

It raged through neighborhoods rich and poor, black and white, upscale and working class. Across Houston and surrounding communities, no group sidestepped its paralyzing deluges and apocalyptic floods.

"Harvey didn't spare anyone: The whole city is traumatized," said Lynnette Borrel, whose backyard pool filled with murky water and schools of minnows from Brays Bayou on the city's southwest side not far from downtown.

Far to the northeast edge of the sprawling city, a flotilla of boats rescued affluent residents of the pine forest villages of charming Kingwood - psychologists, doctors, business owners. And on the far west side, the release of storm water from the Addicks and Barker reservoirs pushed a devastating tide into some of Houston's more wealthy neighborhoods. Clear across town to the southeast, low-slung brick and clapboard homes in the heavily African-American and Hispanic Lockwood area were swamped. Missouri City, home to Houston's largest Asian population, endured more than 40 inches of rain.

... when Harvey submerged roughly 70 percent of the land mass in Harris County, all demographics were inundated.

Okay, we get it. Harvey was an equal-opportunity destroyer, as if we're supposed to take some solace in that.

Stopping at this point would have been just barely tolerable, but Linderman and the AP couldn't resist going further, and dragged the press's mythology about Katrina into the mix:

The poor tend to suffer most in disasters. After Hurricane Katrina in 2005, the world was left with nightmarish images of residents of New Orleans' impoverished Lower Ninth Ward, screaming for help from their rooftops. That storm, which claimed 1,800 lives, stands as a prime example of urban inequality and environmental injustice.

The opening sentence in that paragraph passes muster, but just barely, and thanks only to the word "tend," and only then if one looks at worldwide disasters instead of concentrating only on the U.S. There is no doubt that dirt-poor residents of impoverished countries suffer disproportionately in major disasters, especially in the form of suffering known as death. (Sadly, the linked article also gives oxygen to the ridiculous idea that "climate change" is to blame, when the lack of solid building standards and infrastructure which accompanies the emergence of capitalist economies are the genuinely relevant factors.)

But in the U.S., one could easily argue that Linderman's blithe assumption doesn't hold, even at the "tendency" level.

For example, a map of where Superstorm Sandy flooding occurred in 2012 shows actual flooding in dozens of places, but most prominently in coastline properties on Staten Island and New Jersey. While not domiciles of the super-rich, the people affected at these properties are — or, in many unfortunate instances, were — solidly middle-class.

A CBS 60 Minutes report on Sandy's aftermath in March 2015, 2-1/2 years after the storm hit, indicated that it is these very coastal-area property owners, whom the report characterizes as holders of middle-class jobs, who had been ripped off by insurance companies over whom the Federal Emergency Management Administration (FEMA) should have been exercising oversight, and clearly wasn't.

The insurance companies involved are alleged to have pervasively and deliberately used forged and fabricated insurance adjusters' documents to contend that most affected structures either had no structural damage as a result of the storm or had serious structural damage before Sandy arrived, and that they therefore paid victims, aka policyholders, only about one-third of what they should have been paid to be made whole on their real estate losses. Suddenly, hundreds if not thousands of people, excuse the expression, were underwater on their mortgaged properties.

Now let's get to Linderman's specific revisionist claims about Katrina dressed up as supposedly "objective" and indisputable historical facts.

Taking the AP reporter's phrase "urban inequality" to mean what it usually means in establishment press code, i.e., "women and minorities hardest hit," Katrina's known death toll in Metro New Orleans as of mid-December 2005, based on data from the Louisiana Department of Health and Hospitals, was disproportionately white:

Additionally, as Nathan Burchfiel at CNS news reported at the time, appearing to focus on the city of New Orleans alone:

... the state's demographic information suggests that whites in New Orleans died at a higher rate than minorities. According to the 2000 census, whites make up 28 percent of the city's population, but the Louisiana Department of Health and Hospitals indicates that whites constitute 36.6 percent of the storm's fatalities in the city.

... The storm also did not discriminate based on gender. Fifty percent of the victims were male and 49 percent were female, with 1 percent being undetermined.

Despite those cold, hard, and tragic facts, CNS's Burchfiel noted that "Liberals in the aftermath of the storm were quick to allege that the Bush administration delayed its response to the catastrophe because most of the victims were black." That is nonsense, based on the raw stats just presented and the facts about FEMA's benchmarked response to the storm.

If Juliet Linderman wants to look for dismissive treatment involving "urban inequality," all she has to do is look at the behavior of Democrats who ran the state at the time, particularly Louisiana Governor Kathleen Blanco and New Orleans Mayor Ray Nagin, as admitted by Vanity Fair:

This lack of communication, preparation, and hands-on management led to infuriating situations like the one involving hundreds of school buses which could have been used to evacuate residents instead getting buried in the water.

In terms of post-Katrina federal aid in Louisiana, as of two years ago, it reportedly amounted to $76 billion. As the linked article notes, "That's almost three times the size of Louisiana's annual budget." It's a bit less than half (in real terms) of what the entire state's annual gross domestic product was at the time. If the aid didn't go where it was supposed to go because of "urban inequality," especially during the first few years, whose fault was that? Further, why isn't anyone asking what it is about the political and economic climate of New Orleans that caused tens of thousands of people decide to flee the city permanently?

As to Katrina serving as an example of "environmental injustice," this is an insult to readers' intelligence.

A primary basis for this meme appears to be a publication by the Joint Center for Political and Economic Studies, an obviously left-leaning group which "explores a range of public policy issues of concern to" persons of color — as long as they are liberals and Democrats.

A bitter gift from Hurricane Katrina was to refocus America’s attention on the enduring legacy of racial segregation and poverty in the Gulf South. Early cries that “the storm didn’t discriminate” now have been discredited by statistics showing that the storm’s impacts often weighed more heavily upon racial minorities and the poor (as seen above, no they haven't. Ed.). In addition, the recovery of socially and economically vulnerable storm victims continues to lag behind mainstream society.

What fueled these inequitable outcomes? Over the course of many years, racial segregation in this region established patterns of settlement for many African Americans in less desirable flood-prone areas.

Lord have mercy. To the extent that economic impacts might have been disparate, who created the "legacy of racial segregation and poverty in the Gulf South" and "inequitable outcomes" which resulted? Democrats in the Jim Crow South. Who has done so much to improve the economies in the Southern states for everyone, including blacks, since the mid-1960s passage of the Civil Rights and Voting Rights Acts passed with predominantly Republican support? Overwhelmingly Republican and conservative governors, presidents, and subsequent Republican-controlled Congresses.

The Joint Center's report has all kinds of colorful graphs which really show just one thing: Katrina struck portions of the country which are poorer than the rest of the U.S., and which have a higher percentage of minorities than the rest of the U.S. They think that's not fair. Geez, guys, tell us something we don't know — and bring your complaints to Mother Nature.

The report also claims that evil southern governments have wanted to build factories, refineries, chemical plants, and the like where a lot of potential workers live. Since a lot of those potential workers are minorities, that means that the Joint Center, in the name of this mythical concept of "environmental justice," would prefer that these plants never be built, and that the related jobs never be created, than see job growth and economic opportunity flourish in the impoverished areas they claim to want to improve.

More fundamentally, how can Juliet Linderman even claim that she knows what she thinks she knows?

In 2005, according to her LinkedIn profile, she was a sophomore at New York University majoring in Geography and Literature. Perhaps as editor of the Gallatin Review, she was able to visit New Orleans during Katrina. That seems unlikely, given that the publication is "an annual journal of student poetry, fiction, creative nonfiction, and visual art ... edited by students under faculty supervision."

Barring a quite unlikely Katrina visit, she has absolutely no basis on which to personally support her claims about "urban inequality and injustice." She has only the pathetically biased and obviously politicized establishment press reporting which took place at the time. She must believe that they reported the situation fairly and accurately during that time.

As the Media Research Center showed in a tenth anniversary lookback in 2015, and as NewsBusters.org demonstrated during and after the hurricane struck in September 2005, she could not be more wrong.