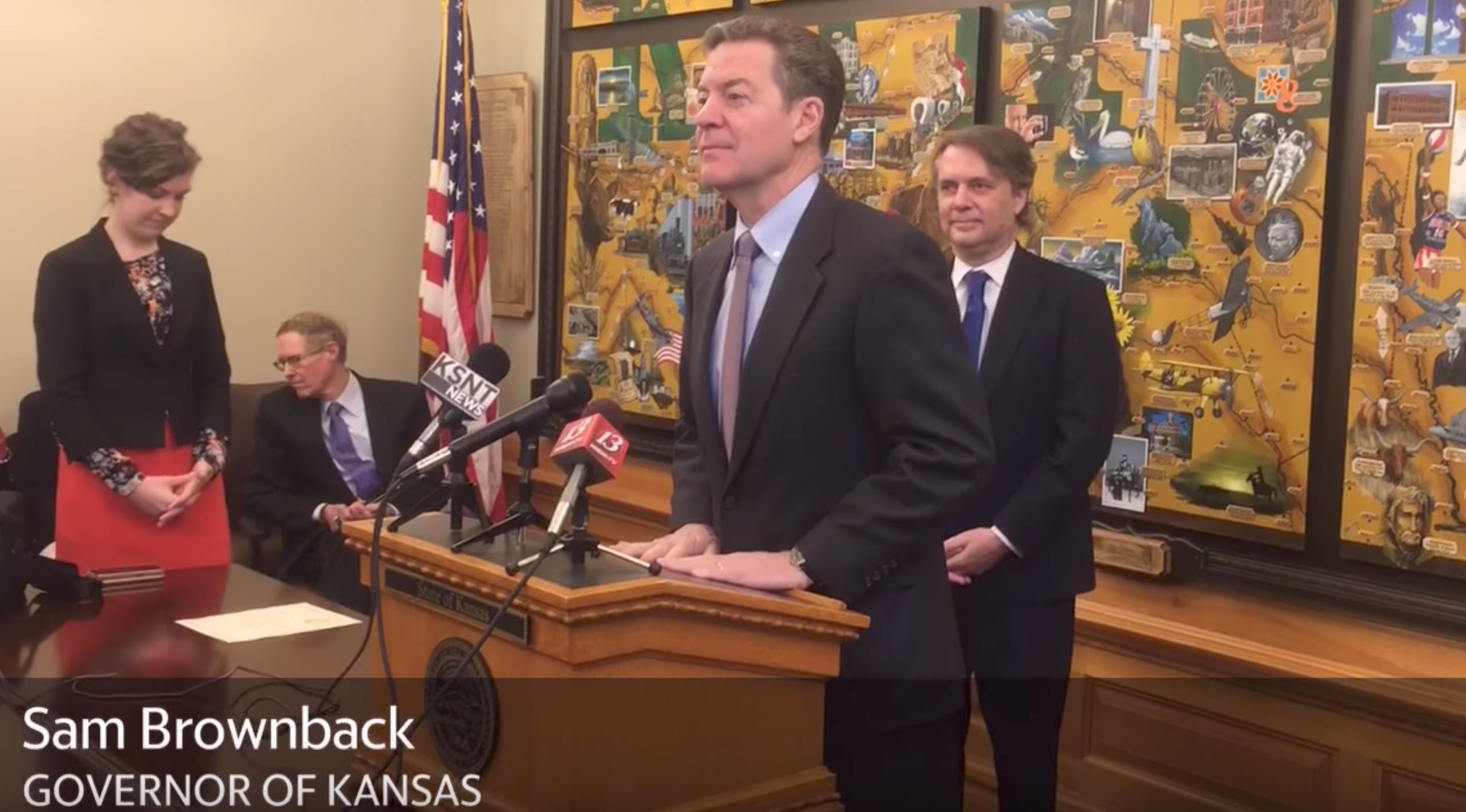 Since Republican Sam Brownback became the Governor of Kansas, the press has been salivating at the opportunity to declare his fiscally conservative policies a failure, to the point where they believe that their failure is an undisputed truth.

A late-July Associated Press story about Brownback's impending nomination to leave his gubernatorial post to become the Trump administration's head of the Office of International Religious Freedom in the U.S. State Department called him "One of the least popular governors in the country."

Besides the obvious complaint that a poll, especially one cited by an outfit which is an integral part of the establishment press's fake-news empire, doesn't genuinely demonstrate popularity or electability (see: Hillary Clinton), the facts are that Brownback won his two gubernatorial contests by with 63 percent of the vote in 2010 and a 4-point victory margin in 2014. In the latter instance, newspapers like the New York Times and many outlets in the Kansas press all but assumed that Brownback would lose, and could barely contain their anticipatory glee.

Brownback's core policies have consistently revolved around reining in runaway government. Fiscally, that has meant tax cuts and spending restraint. As has been the case in Washington DC, many supposedly conservative Kansas Republicans who talked a good game during the out-of-control Kathleen Sebelius era somehow didn't have the nerve to deliver on many of the promises they had made once they achieved legislative and executive branch control.

But the main problem with Brownback's completely sensible policies, which banked heavily on the idea that the state's tax cuts would generate additional collections, was that their success necessarily depended on the reasonable expectation that the federal government would manage its way out of the 2008-2009 recession and deliver a decent level of national economic growth. That didn't happen. Instead, the nation under President Obama got the worst economic recovery since World War II. It would be nothing short of a miracle if tax cuts in one small state could somehow overcome the drag of Washington's awful economic policies. Sorry, everyone in the press, the fact that they couldn't is not Sam Brownback's fault.

Beyond that, the state and national press obsessed over Brownback's insistence that people receiving Temporary Assistance for Need Families (TANF, aka "traditional welfare") not only use their funds responsibly, but also get jobs.

Concerning the former, it was supposedly a horrendous thing that in 2015, Brownback signed a "sweeping welfare crackdown," making it illegal "for welfare recipients to spend public assistance dollars in movie theaters, tattoo parlors, lingerie stores, and dozens of other places deemed inappropriate by the state - like on cruise ships."

Just a dozen of the other alleged hardships Kansas imposed included bans on the following:

More important than making sure that welfare dollars are spent on things that generally contribute to families' genuine welfare is the idea that getting people off the welfare rolls into the workforce is a win-win for everyone. Some people might believe that this debate ended in 1996 when Congress passed welfare reform and essentially maneuvered President Clinton into signing the related law to preserve his chances of reelection later that year. That's mostly true, but as we'll see, one very large state has been especially and defiantly determined to grow its dependency rolls.

As the Washington Free Beacon's Ali Meyer reported on Monday, Kansas has been equally determined to reduce its welfare rolls, and has been extraordinarily successful in doing so since Brownback became its governor:

Welfare reform implemented in Kansas caused individuals to reenter the labor force while earning higher incomes, according to a report from the Foundation for Government Accountability.

... From 2000 to 2011, the number of able-bodied adults on cash welfare was increasing by 42 percent in Kansas, while nationally the number on welfare had dropped by a third.

Brownback first began reforming welfare by strengthening sanctions for those who received cash assistance by implementing a three-month ban on those who refused to meet work requirements. If an individual failed to meet the requirement for a second or third time, the ban was prolonged for six months to a year.

"Since these reforms took effect, compliance with work requirements has climbed from historic lows," the report states. "The percentage of able-bodied adults on the program who are employed has also risen. Meanwhile, the opposite trends were occurring both nationally and in the region with fewer able-bodied adults on welfare working."

... The study found that those who left welfare saw their earnings increase by 104 percent in one year, which is $20 million more than they had while on welfare. In four years, these individuals saw their incomes increase by 247 percent.

Individuals who left welfare are also better off because they found employment in more than 600 different industries and found long-term, high-paying jobs.

The Foundation for Government Accountability is a free market think tank. Sadly, the government-knows-best (when Democrats are in charge) press tends to pay reports from such outfits little heed. That's too bad, because the Foundation's numbers appear to be dead-on:

It almost goes without saying that attempts to find establishment press coverage of Kansas's success in reducing its welfare rolls proved fruitless.

Readers who followed the links to the government's data likely noticed something else, namely that the real outlier and direct defier of welfare reform has been California.

California has roughly 12 percent of the nation's population, but over 40 percent of its welfare recipients — and until very recently, the problem was getting progressively (pun intended) worse:

Stats like these almost make one want to beg the state to secede. A much better idea would be to break the left's stranglehold there. Good luck with that.

At least the rest of the nation can take some (emphasis: only some, given the level of enrollment in food stamps, housing vouchers, and the like) consolation in the fact that non-California enrollment in TANF, or traditional welfare, is below levels last seen in the 1960s, and that if more states would implement policies like those seen in Kansas, the situation would improve even further.

Here's one final point which should not be overlooked. The Foundation's findings on rising incomes for those who got off of welfare in Kansas and into jobs lend significant credence to the idea that the Republican-driven welfare reform law in 1996, which put millions of former recipients into the workforce during the next four years, deserves a far greater share of the credit for the prosperous late-1990s economy than most people have given it.