Desperate to make a case that voter-ID laws kept "many" people who should be allowed to vote from casting ballots in Wisconsin in November, two reporters at the Associated Press claimed "it is not hard to find" examples of Badger State residents who were "turned away."

Left unexplained is how reporters Christina A. Cassidy and Ivan Moreno apparently could only identify four people out of hundreds of thousands allegedly affected after six months of searching. Despite a headline claiming that those involved faced "insurmountable" barriers, each person cited could have successfully cast a ballot, but failed to do so because of inadequate follow-through.

In their May 9 story (corrected slightly on May 10), the AP reporters failed to clearly state how the law in Wisconsin works, as seen in the following paragraph (bolds are mine throughout this post):

Under the state's law, voters must present a driver's license, state ID, passport, military ID, naturalization papers or tribal ID to vote. A student ID is acceptable only if it has a signature and a two-year expiration date. Those who do not have their ID can cast a provisional ballot that will be counted only if they return with the proper ID within a few days of the election.

Most readers will believe that the "state ID" to which the pair referred is the kind issued when one doesn't have or need a driver's license. Perhaps the AP reporters, if they didn't sufficiently investigate the facts, also believe this.

The fact is that Badger State residents could obtain a free "state ID" for voting enabling them to vote on Election Day "even if you do not have the documentation to get a regular Wisconsin ID":

Opponents' final appeal attempt to overturn the law or obtain a restraining order against enforcing it in November failed in late August, meaning that anyone who intended to vote had about ten weeks to obtain the needed ID, including the one described above whose requirements were clearly lenient, and which, per a CNN report, was available in time for the 2016 election.

* The first would-be voter allegedly lost her driver’s license shortly before the election. It sounds like she didn’t cast a provisional ballot. If she did, the AP gives no explanation for why she failed to return to the polling place to validate her ballot. 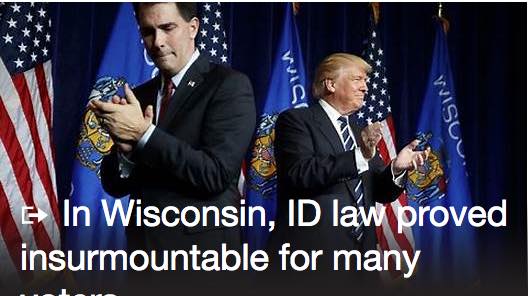 * The second presented a driver’s license from another state, and was too busy to return to the polls to validate a provisional ballot.

* The third, who was dying of cancer, had an expired driver’s license. She was told during the early voting period that she should get a new license, but the DMV station was 15 miles away, so she didn’t do it.

* The fourth had a student ID that didn’t meet the Wisconsin law’s standards. She went to the Department of Motor Vehicles to get a valid ID, but “her work schedule at a Starbucks prevented her from going to the county clerk’s office with the ID so her vote would count.”

As would be expected, the AP reporters gave the four stories involved far more sympathetic treatments, and two of situations indeed involved genuinely difficult circumstances. That said, Hinderaker's fundamental observation that each person could ultimately have cast a validated ballot and did not face utterly "insurmountable" (the AP headline's word) barriers to voting is correct.

Lacking sufficient anecdotal evidence after six months, the reporters cited a bogus estimate that "300,000 eligible voters in the state lacked valid photo IDs heading into the election" without revealing that estimate's origin (the far-left Think Progress, based on a far-left group's utterly not-credible courtroom submission).

Arguing over that claim is a waste of time. That's because there is no argument, given the lenient requirements to get an "ID for voting" seen above.

Capitalizing on the AP's utterly bogus statistic and lower voter turnout in the Badger state in 2016 compared to 2012, far-left outlets like The Nation and CommonDreams.org are now hysterically claiming that the ID law kept 200,000 Badger State voters from the polls, and are further implying that those laws unfairly enabled Donald Trump to win the state's presidential contest by 22,748 votes.

What rubbish. The fact is that Trump won Wisconsin largely because he conducted an aggressive and smart campaign there. By contrast, Hillary Clinton lost largely because she took the Badger State for granted, failing to visit Wisconsin even once in the campaign's final seven months.

On November 1, a week before Election Day, Madison.com's Matthew DeFour was among those who stopped just short of openly ridiculing Trump's campaign strategy:

Republican nominee Donald Trump enters the homestretch of the volatile 2016 presidential campaign by making a strong push for votes in Wisconsin — despite consistently trailing in the polls here and lacking support from key conservatives.

Trump and running mate Indiana Gov. Mike Pence are scheduled to campaign in Eau Claire on Tuesday, one week before Election Day and amid a campaign shaken up by revelations of a renewed FBI investigation into emails tied to Democratic nominee Hillary Clinton.

It would be Trump's fifth campaign stop in Wisconsin since the Republican National Convention in July. And his Wisconsin campaign spokesman confirmed Monday he has plans for a sixth event in the state before Nov. 8.

By contrast, Clinton hasn't campaigned in Wisconsin since the April primary, instead sending surrogates and vice presidential nominee Virginia Sen. Tim Kaine, who will stump in Madison on Tuesday.

... the visit fits with other "perplexing" stops for Trump, including two this week in Michigan, where Clinton is faring even better than she is in Wisconsin.

The left just won't acknowledge, and wants everyone to forget, that the Trump campaign, driven by groundbreaking world-class data analytics, knew what they were doing, and did what it took to win the "blue wall" states of Wisconsin, Michigan and Pennsylvania. Meanwhile, Hillary Clinton neglected those critical states, and failed to provide the needed and properly-placed resources there during the final-week ground-game push.

The remarkable thing about the Democrats’ attack on Wisconsin’s voter ID law is how feeble it is. The Associated Press gives us absolutely no reason to doubt that the courts were correct in upholding the statute.

In the final analysis, perhaps we really should thank AP for presenting such a pathetic case.