In an 18-minute Friday interview on the New Yorker Radio Hour, CNN President Jeffrey Zucker contended that "Fox News ... is state-run TV," that "MSNBC has become the opposition," and that "CNN is seeking the truth." Yes, he really said that.

Zucker also doesn't like the term "fake news" any more — even though his network was one of the earliest post-election promoters of the term when they thought they could use it as a club against others.

New Yorker Magazine's David Remnick started off the interview by crowing about how Trump, instead of hurting CNN, has allegedly catapulted the network to its highest ratings in 14 years during the first quarter of 2017. Remnick's statement about ratings is technically true, but heavily sugar-coated, as Variety.com's Joe Otterson observed on March 28 (bolds are mine throughout this post):

Fox News finished far and above its competition in the ratings for the first quarter of 2017, with the network putting up the highest-rated quarter ever in cable news history.

Finishing third to MSNBC is primetime is hardly something CNN's President can crow about.

Then Remnick, after reminding listeners that Zucker is the person who, while at NBC Television, "greenlit" The Apprentice, and after discussing Trump and that show for a time, gave away his own fever-swamp troubles with having Trump in White House when he asked the CNN head the following question, with a clear tone of near disbelief:

DAVID REMNICK: Do you ever wake up in the morning these days, and think to yourself how weird this is that the guy who was The Apprentice and with all the spooky music behind him and choosing between these four people and firing somebody, this guy now has destroyers off the Korean Peninsula, is lobbing cruise missiles into Syria, is making decisions about healthcare and every aspect of the national life?

Remnick and Zucker both doubt that Trump really believed he had a chance to win the Republican nomination when he entered the race, with Zucker contending that Trump merely thought that a presidential run would help his businesses and his organization.

Zucker acknowledged that a large part of Trump's rise and eventual victory was attributable to the fact that so many Americans are "completely not okay with Washington," and that this disgust with the establishment transcended negative items that the press and the elites thought would sink Trump's campaign.

Zucker also appeared to set the stage for a return of the media's "Decade of Greed" criticism of the Reagan administration, claiming that Trump's supporters will stay with him regardless of his actions as long as their material well-being improves during his presidential term.

At the 13:10 mark, Zucker, with clear encouragement from Remnick, gave his take on the three major cable news networks (HT Matthew Balan at Mediaite):

REMNICK: How would you draw the map of the three obvious cable stations? 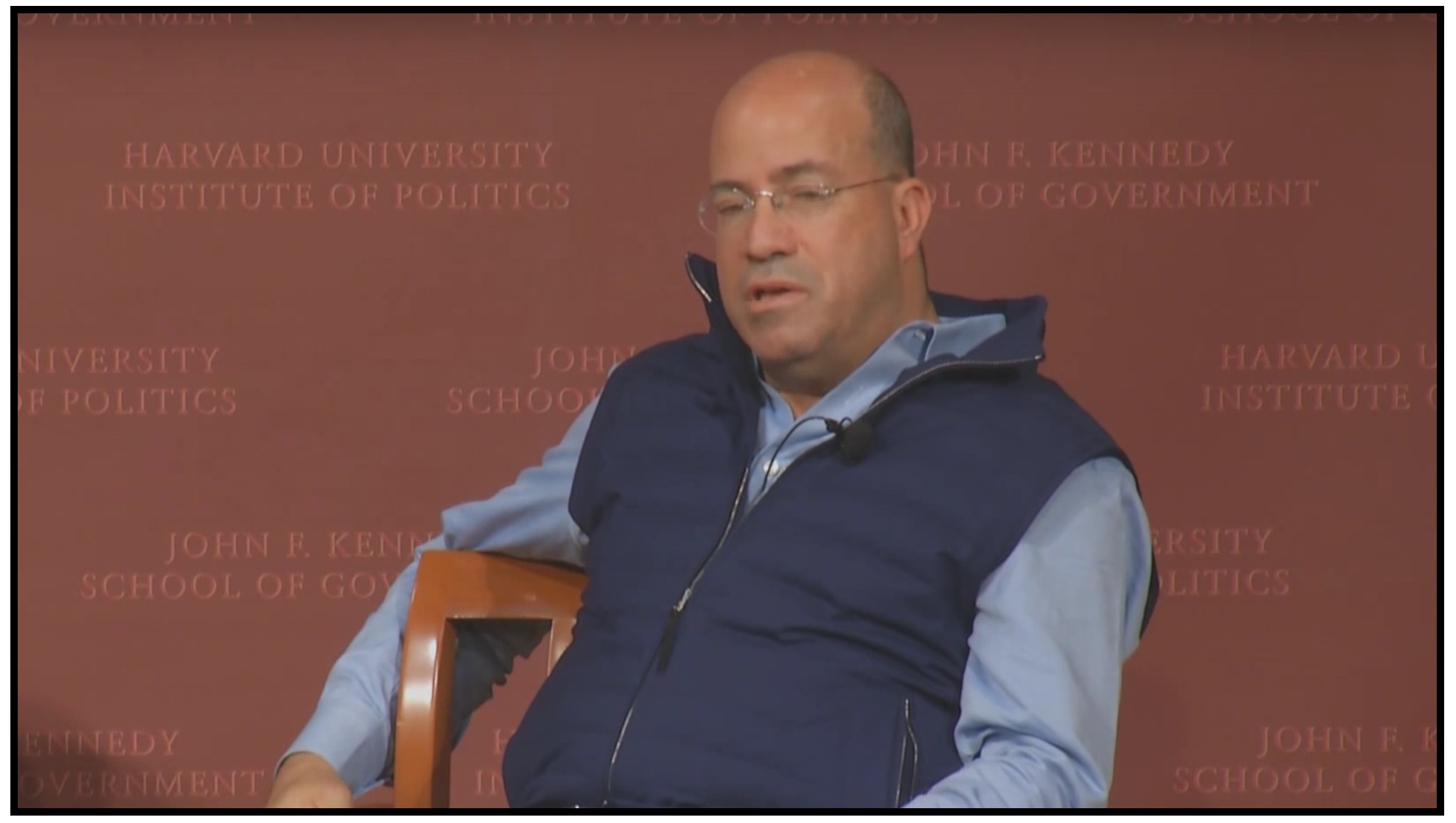 REMNICK: That was a real pause.

JEFF ZUCKER: It was.

REMNICK: Not your radio breaking apart.

REMNICK: You can say it.

ZUCKER: So look, there's three cable news networks. You know, certainly in primetime and in the morning, Fox is state-run TV, and is extolling the line out of White House. MSNBC has become the opposition, and I think CNN is seeking the truth.

And that's really the way we look at the map. State-run TV, the opposition, and we're looking for the truth.

REMNICK: Do you think the other two networks are not broadcasting the truth?

ZUCKER: Well I think that —

REMNICK: And that CNN has a hold on the objective truth?

ZUCKER: Look, I think that there are clear agendas at work at the other cable news networks depending on their political points of view.

REMNICK: You get attacked over and over again as others do, the (Washington) Post, the (New York) Times, others, for "fake news, fake news." What effect is this having on, on the country, this whole notion of "fake news"?

ZUCKER: Yeah. so I actually think it's unfortunate. I think it's an unfortunate phrase. I think we should all try to avoid it. I think it's also dangerous and unfortunate that the President of the United States and the people around him would try to denigrate an institution like the media which is one of the bedrocks of this country.

Zucker eventually went on to assert that from Donald Trump's perspective, "fake news is news that he doesn't like." He also made a genuinely interesting contention that former President Obama's alleged aversion to cable news, which is perceived as the polar opposite of Trump's news-gathering habits, made him seem too detached.

There's not much one can do with Zucker's perception of the three cable networks, except to say two things. First, if Fox News is "state-run TV," someone forgot to tell Juan Williams, Geraldo Rivera, Bob Beckel and several other leftists who regularly appear on Fox shows, now including "The Five" in primetime. Second, no one has come up with a single dictionary word to describe how deluded Zucker has to be to believe that his far-left outfit is the only one of the three cable news networks "seeking the truth."

We also need to deal with Zucker's take on the "fake news" phenomenon by reminding him and readers here that his network was among the earliest and most aggressive post-election adopters of the term. Ah, but that's when they thought they could use the term to harass and intimidate competing voices — including, as will be seen in the video which follows from mid-November, NewsBusters itself:

Note that the network's Brian Stelter went out of his way to say "BS detection tools" when a graphic of a NewsBusters post appeared.

Now that the President has turned the "fake news" argument back on the establishment press, Jeff Zucker wants us to stop using the term.

Too bad, so said, Jeff. Your network and the rest of the establishment press has earned the tag many times over, and it's not going anywhere anytime soon.