Let's imagine that an activist for a conservative cause supported committing physical violence up to and including murder against people doing things he or she sees as "immoral" in a letter to the editor at a local newspaper, and that this same person was behind a state ballot initiative designed to limit the activities of those "immoral" people.

No one would reasonably expect that the leading newspaper in the state involved would for all practical purposes ignore this person's activities. But from all appearances, the Denver Post has virtually ignored the violence-advocating Andrew O'Connor, as well as his co-sponsorship of a Colorado ballot initiative to double the severance tax on the "immoral" oil and gas industry, since April 19.

On April 19, a letter to the editor from O'Connor appeared in the Boulder Daily Camera. According to the Daily Caller, the original content of O'Connor's letter included the following text (bolds are mine throughout this post): 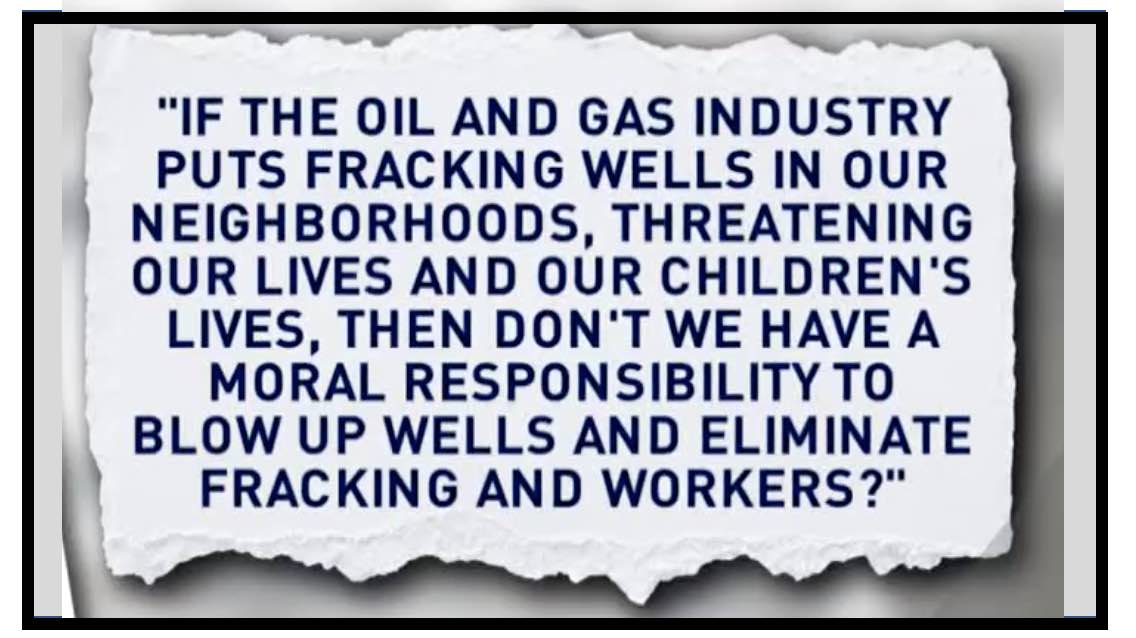 If the oil and gas industry puts fracking wells in our neighborhoods, threatening our lives and our children’s lives, then don’t we have a moral responsibility to blow up wells and eliminate fracking and workers?

The Daily Camera didn't retract O'Connor's threatening letter. Instead, it edited it, supposedly "to delete references that may have been construed to expressly advocate violence or property destruction."

The Daily Caller's Chris White reasonably contended that the Daily Camera "left the writer’s basic thesis in place: violence may be the only way to prevent pipeline construction" and other related industry activity.

The following text remains, demonstrating the correctness of White's contention:

The oil and gas companies are putting their profits ahead of the health of the people in Colorado; consequently, fracking equals murder. Malcolm X said: "I don't call it violence when it's in self-defense; I call it intelligence." Coloradans must be intelligent and act in self-defense to protect their neighborhoods and children from the existential threat of fracking. Weibo Ludwig of Calgary, Canada fought back by pouring cement down wellheads and blew up wells. If the oil and gas industry puts fracking wells in our neighborhoods, threatening our lives and our children's lives, then don't we have a moral responsibility to take action to dissuade frackers from operating here?

When one sees the context in which Malcolm X made the quoted comment in 1963 during that summer's brutal treatment of blacks in Birmingham, Alabama, it's clear that the Daily Camera's editing attempt failed to dilute the morality-challenged O'Connor's advocacy of violence at all:

MALCOLM X: ... if a four-legged dog attacks me for demanding rights that I’m deserved because I’m a human being, I’m going to shoot that dog. And then I’m going to shoot the dog’s owner who allowed it to attack me. I don’t call it violence when it’s in self-defense. I call it intelligence.

(To be clear, a year later Malcolm X appeared to move away from advocating retaliatory violence, as he "defended Dr. [Martin Luther] King’s nonviolent campaign, asserting that 'the people need to listen to Dr. King, or they will have to listen to my alternative.'")

On April 25, Colorado Politics reported that O'Connor is a sponsor of the severance tax-doubling ballot initiative. Indeed, he is the first of two listed co-sponsors. On April 28, that same outlet interviewed O'Connor, who clearly hasn't backed away from his advocacy of violence:

Fracking foe, dogged by his comments, past, says, ‘I’m not the story here’

Andrew O’Connor’s business card says “Attorney at Law,” but his true calling these days seems to be fracktivist — a label he doesn’t reject.

After all, he may well be Colorado’s most notorious anti-fracking activist at the moment. He got a national media mention last week for a recent letter to the editor published — and then hastily re-edited — by the Boulder Daily Camera that appeared to endorse violence against fracking operations. He dug in deeper this week when he told ColoradoPolitics.com, “I wouldn’t have a problem with a sniper shooting one of the workers” at a fracking site.

... he’s not actually licensed to practice law in Colorado. Or anywhere else. His Florida law license, issued long ago, has been on the inactive list for years.

Though the 57-year-old O’Connor has made a living as a paralegal, he’s not working at all right now — which, he explained, is why he was wondering if ColoradoPolitics.com paid for interviews. We don’t, but he agreed to talk anyway, addressing published media accounts about his history of conflict, confrontation and run-ins in Florida, New Mexico, Colorado and elsewhere. He denounces and disputes some of those accounts.

The man who is now poised to mount a petition drive for what could be the next big ballot battle with the oil and gas industry said his foes are dredging up the old, bad press to change the subject.

... “I want you to talk about how immoral the oil and gas industry is. It’s a toxic, murderous industry.”

On Thursday, O'Connor, in an initiative-related filing, requested that a rehearing be conducted by phone instead of in person, oh-so-predictably complaining without submitting evidence that he and his co-sponsor "feel physically threatened by opposing counsel and the oil and gas industry."

This is especially rich, because, in light of O'Connor's threatening April 19 letter, TV station KUSA reports that the Colorado Secretary of State's office has decided that that the rehearing involved and any future hearings relating to the initiative need to be moved to a secure building with metal detectors. O'Connor claims Colorado officials are being "ridiculous drama queens."

A search on the violence-advocating ballot initiative-sponsoring O'Connor's name at the Post returns no current stories.

A review of the Post's more recent stories and entries on fracking surfaced a letter to the editor from Dan Haley, the CEO and president of the Colorado Oil & Gas Association. Haley cited O'Connor's letter to the Boulder newspaper without naming him, and asked, in the absence of criticism from the left:

Where are the environmental groups that have been whipping people into a frenzy over oil and gas development? Do they agree with these threats? Where are the state lawmakers who have been leading the charge against industry? Surely these remarks go beyond their comfort level.

Where are the leaders?

If the subject in question was a conservative ballot-initiative sponsor suggesting to "eliminate workers," and who was fine with someone conducting sniper attacks against, say, abortion providers, it's pretty safe to say that the Denver Post would have taken a keen interest in that person's current and previous antics almost instantly — and the paper would obviously be totally justified and expected to do just that. The Post would also be putting heat on nonviolent people who would otherwise be sympathetic with this person's cause to denounce him or her. It's also quite likely that this kind of story would quickly become national news.

So what explains the Post's current virtual silence? Is it really pretending to rely on a single letter to the editor from a victimized industry official to say, "Oh yeah, we've covered that"?

If that's the paper's outlook, that's ridiculously irresponsible. O'Connor needs to be named and, because he deserves it, shamed. His name and his violent outlook should be widely known throughout the Centennial State. If that hurts the prospects of the ballot initiative he's behind and the cause of environmentalism in general, whose fault is that?